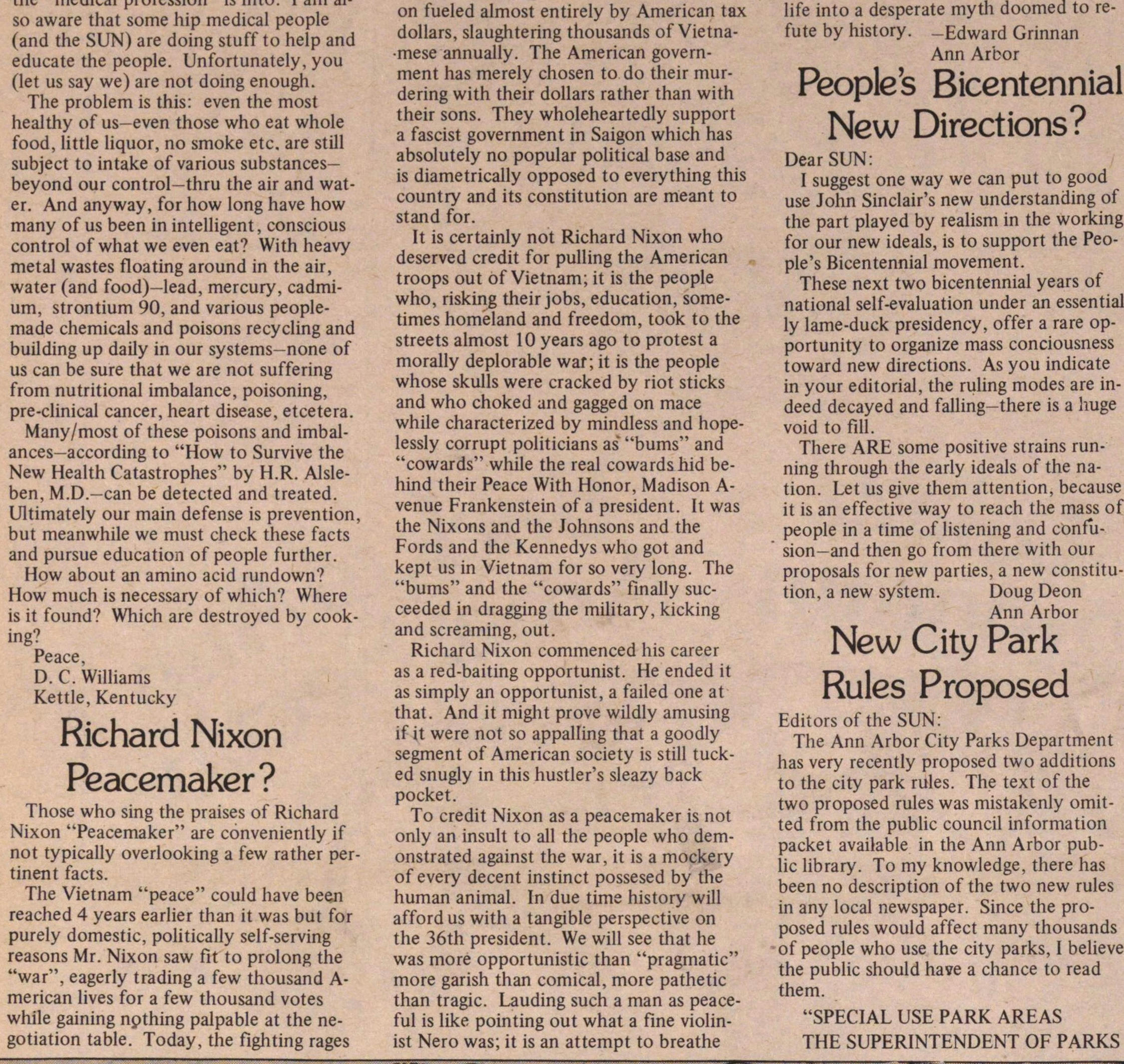 Those who sing the praises of Richard Nixon "Peacemaker" are cónveniently if not typically overlooking a few rather pertinent facts. The Vietnam "peace" could have been reached 4 years earlier than it was but for purely domestic, politically self-serving reasons Mr. Nixon saw fit to prolong the "war", eagerly trading a few thousand American lives for a few thousand votes while gaining npthing palpable at the negotiation table. Today, the fighting rages on fueled almost entirely by American tax dollars, slaughtering thousands of Vietnamese annually. The American government has merely chosen to do their murdering with their dollars rather than with their sons. They wholeheartedly support a fascist government in Saigon which has absolutely no popular political base and is diametrically opposed to everything this country and its constitution are meant to stand for. It is certainly not Richard Nixon who deserved credit for puiling the American troops out of Vietnam; it is the people who, risking their jobs, education, sometimes homéland and freedom, took to the streets almost 10 years ago to protest a morally deplorable waf; it is the people whose skulls were cracked by riot sticks and who choked and gagged on mace while characterized by mindless and hopelessly corrupt politicians as" "bums" and "cowards" while the real cowardshid behind their Peace With Honor, Madison Avenue Frankenstein of a president. It was the Nixons and the Johnsons and the Fords and the Kennedys who got and kept us in Vietnam for so very long. The "bums" and the "cowards" finally succeeded in dragging the military, kicking and screaming, out. Richard Nixon commenced his career as a red-baiting opportunist. He ended it as simply an opportunist, a failed one at that. And it might prove wildly amusing if it were not so appalling that a goodly segment of American society is still tucked snugly in this hustler's sleazy back pocket. To credit Nixon as a peacemaker is not only an insult to all the people who demonstrated against the war, it is a mockery of every decent instinct possesed by the human animal. In due time history will afford us with a tangible perspective on the 36th president. We will see that he was more opportunistic than "pragmatic" more garish than comical, more pathetic than tragic. Lauding such a man as peaceful is like pointing out what a fine violinist Nero was; it is an attempt to breathe life into a desperate myth doomed to fute by history.