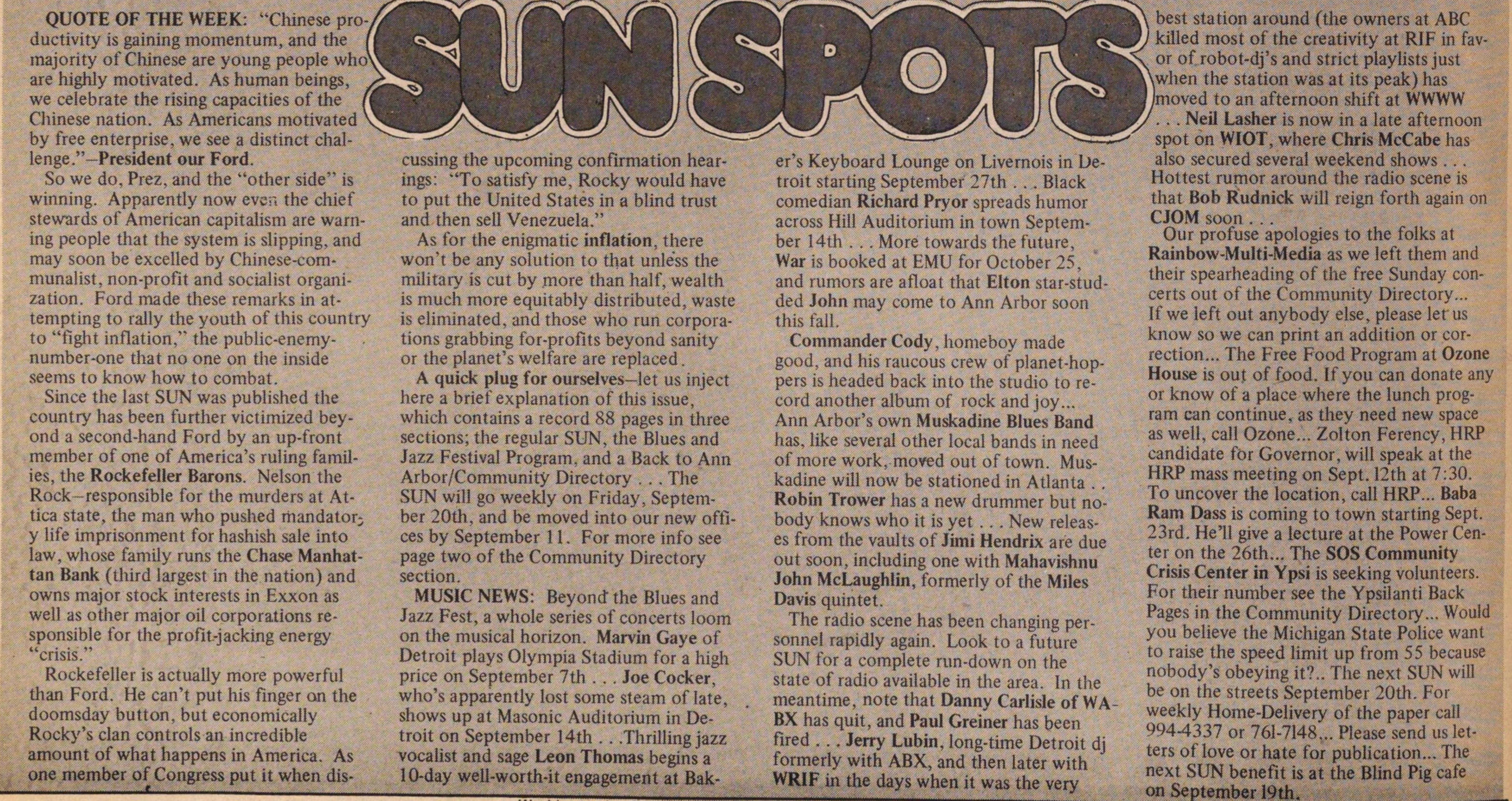 QUOTE OF THE WEEK: "Chinese productivity is gaining momentum, and the majority of Chinese are young people who are highly motivated. As human beings, we celébrate the rising capacities of the Chinese nation. As Americans motivated by free enterprise, we see a distinct challenge."-President our Ford. so we do, Frez, and the other side is winning. Apparently now ever, the chief stewards of American capitalism are waming people that the system is slipping, and may soon be excelled by Chinese-communalist, non-profit and socialist organization. Ford made these remarks in attempting to rally the youth of this country to "fight inflation," the public-enemynumber-one that no one on the inside seems to know how to combat. Since the last SUN was published the country has been further victimized beyond a second-hand Ford by an up-front member of one of Arnerica's ruling families, the Rockefeller Barons. Nelson the Rock-responsible for the murders at Attica state, the man who pushed rhandatory life imprisonment for hashish sale into law, whose family runs the Chase Manhattan Bank (third largest in the nation) and owns major stock interests in Exxon as well as other major oil corporations responsible for the profit-jacking energy "crisis." Rockefeller is actually more powerful than Ford. He can't put his finger on the doomsday button, but economically Rocky's clan controls an incredible amount of what happens in America. As one member of Congress put it when cussing the upcoming confirmation hearings: "To satisfy me, Rocky would have to put the United States in a blind trust and then sell Venezuela." As tbr the enigmatic inflation, there won't be any solution to that unléss the military is cut by more than half, wealth is much more equitably distributed, waste is eliminated, and those who run corporations grabbing for-profits beyond sanity or the planet's welfare are replaced. A quick plug for ourselves- let us inject here a brief explanation of this issue, which contains a record 88 pages in three sections; the regular SUN, the Blues and Jazz Festival Program, and a Back to Ann ArborCommunity Directory . . . The SUN will go weekly on Friday, September 2Oth, and be moved into our new offices by September 1 1 . For more info see page two of the Community Directory section. MUS1C NEWS: Beyontf the Blues and Jazz Fest, a whole series of concerts loom on the musical horizon. Marvin Gaye of Detroit plays Olympia Stadium for a high price on September 7th . . . Joe Cocker, who's apparently lost some steam of late, shows up at Masonic Auditorium in Detroit on September 14th . . .Thrilling jazz vocalist and sage Leon Thomas begins a 10-day well-worth-it engagement at er's Keyboard Lounge on Livernois in Detroit starting September 27th . . . Black comedian Richard Pryor spreads humor across Hill Auditorium in town September 14th . . . More towards the future, War is booked at EMU for October 25, and rumors are afloat that Elton star-studded John may come to Ann Arbor soon this fall. Commander Cody, homeboy made good, and his raucous crew of planet-hoppers is headed back into the studio to record another album of rock and joy... Ann Arbor's own Muskadine Blues Band has, like several other local bands in need of more work, moved out of town. Muskadine will now be stationed in Atlanta Robin Trower has a new drummer but nobody knows who it is yet . . . New releases from the vaults of Jimi Hendrix are due out soon, including one with Mahavishnu John McLaughlin, formerly of the Miles Davis quintet. The radio scène has been changing personnel rapidly again. Look to a future SUN for a complete run-down on the state of radio available in the area. In the meantime, note that Danny Carlisle of WABX has quit, and Paul Greiner has been fired . . . Jerry Lubin, long-time Detroit dj formerly with ABX, and then later with WRIF in the days when it was the very best station around (the owners at ABC 1 killed most of the creativity at RIF in favor of.robot-dj's and strict playlists just When the station was at its peak) has Jmoved to an afternoon shift at WWWW ' . . . Neil Lasher is now in a late afternoon spot on WIOT, where Chris McCabe has also secured severa! weekend shows . . . Hottest rumor around the radio scène is that Bob Rudnick will reign forth again on CJOM soon . . . Our profuse apologies to the folks at Rainbow-Multi-Media as we left them and their spearheading of the free Sunday concerts out of the Community Directory... [f we left out anybody else, please let us know so we can print an addition or correction... The Free Food Program at Ozone House is out of food. If you can dónate any or know of a place where the lunch program can continue, as they need new space as well, cali Ozone... Zolton Ferency, HRP candidate for Governor, will speak at the HRP mass meeting on Sept. 12th at 7:30. To uncover the location, cali HRP... Baba Ram Dass is coming to town starting Sept. 23rd. He'U give a iecture at the Power Center on the 26th... The SOS Community Crisis Center in Ypsi is seeking volunteers. For their number see the Ypsilanti Back Pages in the Community Directory... Would you believe the Michigan State Pólice want to raise the speed limit up from 55 because nobody's obeying it?.. The next SUN will be on the streets September 20th. For weekiy Home-Delivery of the paper cali 9944337 or 761-7148... Please send us letters of love or hate for publication... The lext SUN benefit is at the Blind Pig cafe an September 19th.