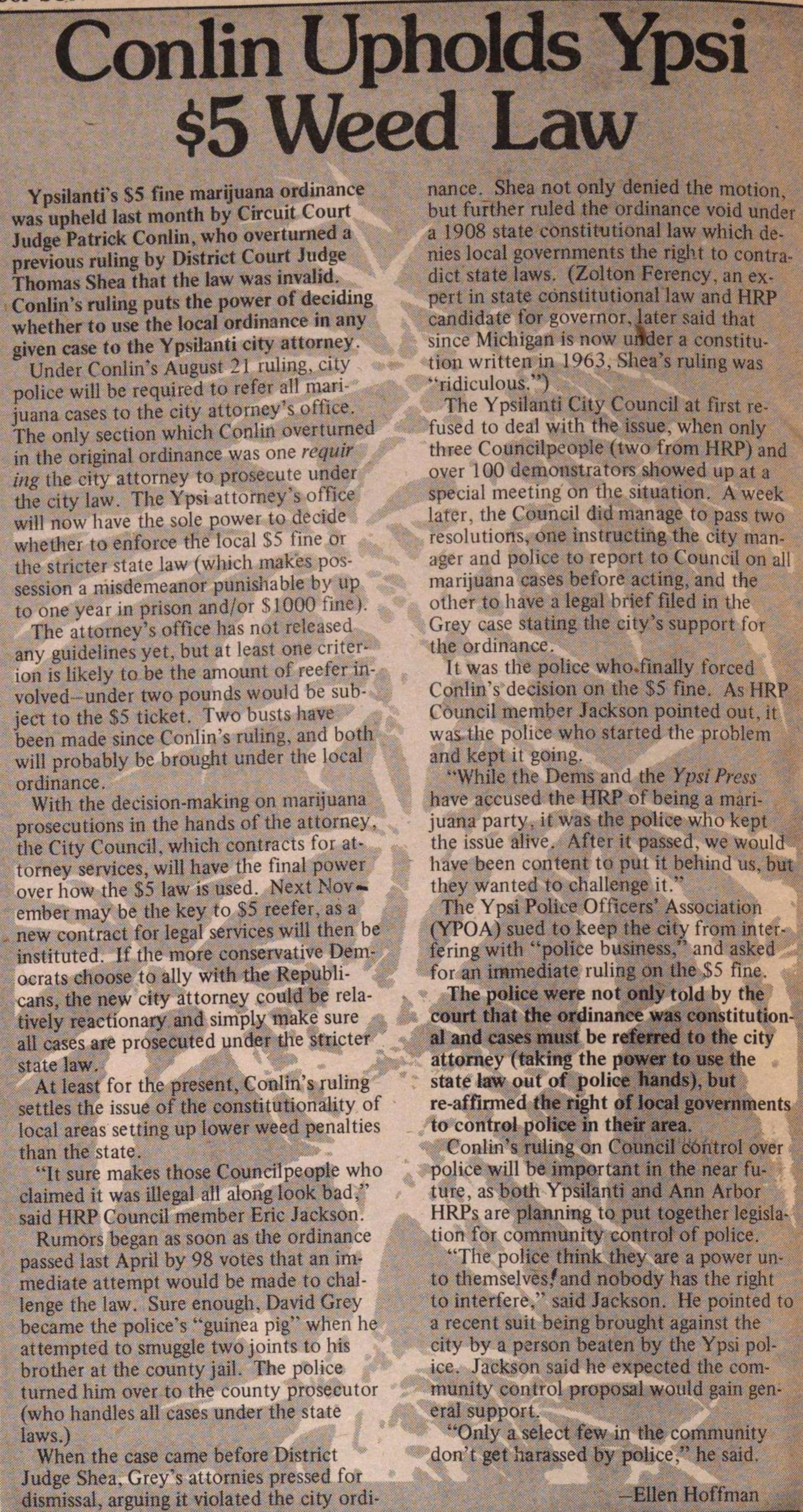 Ypsüanti's $5 fine marijuana ordinance was upheld last month by Circuit Court Judge Patrick Conlin, who overturned a previous ruling by District Court Judge Thomas Shea that the law was invalid. Conlin's ruling puts the power of decidmg whether to use the local ordinance in any given case to the Ypsilanti city attorney. Under Conlin's August 2 1 ruling, city pólice will be required to refer all marijuana cases to the city attorney's office. The only section which Conlin overturned in the original ordinance was one requir ing the city attorney to prosecute under the city law. The Ypsi attorney's office will now have the sole power to decide whether to enforce the local $5 fine or the stricter state law (which makes possession a misdemeanor punishable by up to one year in prison andor SI 000 tine). The attorney's office has nut released any guidelines" yet, but at least one criterion ís likely to be the amount of reefer involved-under two pounds would be subject to the $5 ticket. Two busts have been made since Conlin's ruling, and both will probably be brought under the local ordinance. With the decision-making on marijuana prosecutions in the hands of the attorney, the City Council. which contracts for attorney services, will have the final power over how the $5 law is used. Next November may be the key to $5 reefer, as a , new contract for legal services will then be instituted. If the more conservative Democrats choose to ally wïth the Republicans, the new city attorney could be relatively reactionary and simply make sure all cases are prosecuted under the stiicter state law. . ?& -&K At least for the present, Conlin's ruling settles the issue of the constitutionality of local áreas setting up lower weed penalties than the state. 'it sure makes those Councilpeople who claimed it was Ülegal all alonglook bad," said HRP Council member Eric Jackson. Rumórs began as soon as the ordinance passed last April by 98 votes that an immediate attempt would be made to challenge the law. Sure enough, David Grey became the police's "guinea pig" when he % attempted to smuggle two joints to hts brother at the countyjail. The pólice turned him over to the county prosecutor (who handles all cases under the state laws.) When the case came before District Judge Shea, Grey's attornies pressed for dismissal, arguing it violated the city nance. Shea not only denied the motion, but further ruled the ordinance void under a 1908 state constitutional law which denies local governments the right to contradict state laws. (Zolton Ferency, an expert in state cónstitutional law and HRP candidate for governor, later said that since Michigan is now urlder a constitution written in 1963, Shea's ruling was "ridiculous.") The Ypsilanti City Council at first refused to deal with the issue, when only three Councilpcople (two from HRP) and over 100 demonstrators showed up at a special meeting on the situation. A week later, the Council did manage to pass two resolutions, one instructing the city manager and pólice to report to Council on all marijuana cases before acting, and the other to have a legal brief filed in the Grey case stating the city's support for the ordinance. It was the pólice who.finally forced Conlin's decisión on the $5 fine. As HRP Council member Jackson pointed out, it was, the pólice who started the problem and kept it going. "While the Dems and the Ypsi Press have accused the HRP of being a marijuana party, it was the pólice who kept the issue alive. After it passed, we would have been content to put it behind us, but tliey wanted to challenge it." The Ypsi Pólice Officers' Association (YPOA) sued to keep the city from interfering with "pólice business," and asked for an immediate ruling on the S5 fine. The pólice were not only told by the court that the ordinance was constituttonal and cases must be referred to the city attorney (taking the power to use the state law out of pólice hands), but re-affirmed the right of local governments to control pólice in their area. Conlin's ruling on Council control over pólice will be important in the near future, as both Ypsilanti and Ann Arbor HRPs are planning to put together legislation for community control of pólice. "The pólice think they are a power unto themselvèsfand nobody has the right to interfere," said Jackson. He pointed to a recent suit being brought against the city by a psrson beaten by the Ypsi police. Jackson said he expected the community control proposal would gain general support. "Only a select few in the community don't get harassed by pólice." he said.