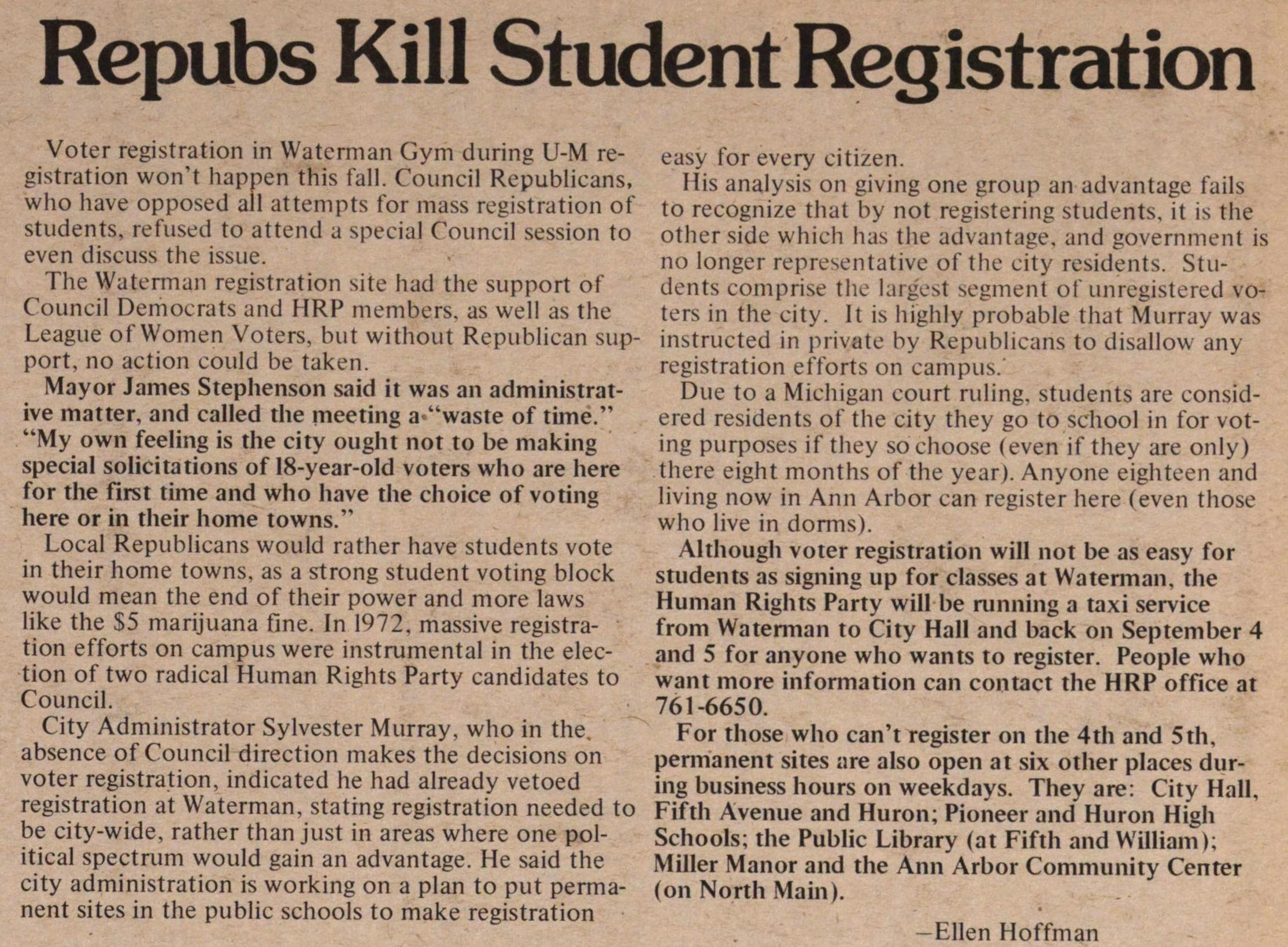 Voter registration in Waterman Gym during U-M registration won't happen this fall. Council Republicans, who have opposed all attempts for mass registration of students, refused to attend a special Council session to even discuss the issue. The Waterman registration site had the support of Council Democrats and HRP members. as well as the League of Women Voters, but without Republican support, no action could be taken. Mayor James Stephenson said it was an administrative matter, and called the meeting a"waste of time." "My own feeling is the city ought not to be making special solicita tions of 18-year-old voters who are here for the first time and who have the choice of voting here or in their home towns." Local Republicans would rather have students vote in their home towns, as a strong student voting block would mean the end of their power and more laws like the $5 marijuana fine. In 1972, massive registration efforts on campus were instrumental in the election of two radical Human Rights Party candidates to Council. City Administrator Sylvester Murray, who in the. absence of Council direction makes the decisions on voter registration, indicated he had already vetoed registration at Waterman, statrng registration needed to be city-wide, rather than just in areas where one political spectrum would gain an advantage. He said the city administration is working on a plan to put permanent sites in the public schools to make registration easy forevery citizen. His analysis on giving one group an advantage fails to recognize that by not registering students, it is the otlierside which has the advantage. and government is no longer representative of the city residents. Students comprise the largest segment of unregistered voters in the city. It is liighly probable that Murray was instructed in private by Republicans to disallow any registration efforts on campus. Due to a Michigan court ruling, students are considered residents of the city they go to school in for voting purposes if they sochoose (even if they are only) there eight months of the year). Anyone eighteen and living now in Ann Arbor can register here (even those who live in dorms). Althougli voter registration will not be as easy for students as signing up for classes at Waterman, the Human Rights Party will be running a taxi service from Waterman to City Hall and back on September 4 and 5 for anyone who wants to register. People who want more information can contact the HRP office at 761-6650. For those who can't register on the 4th and 5th, permanent sites are also open at six other places during business hours on weekdays. They are: City Hall, Fifth Avenue and Huron; Pioneer and Huron High Schools; the Public Library (at Fifth and William); Miller Manor and the Ann Arbor Community Center (on North Main).