UM Clericals To Vote In Union 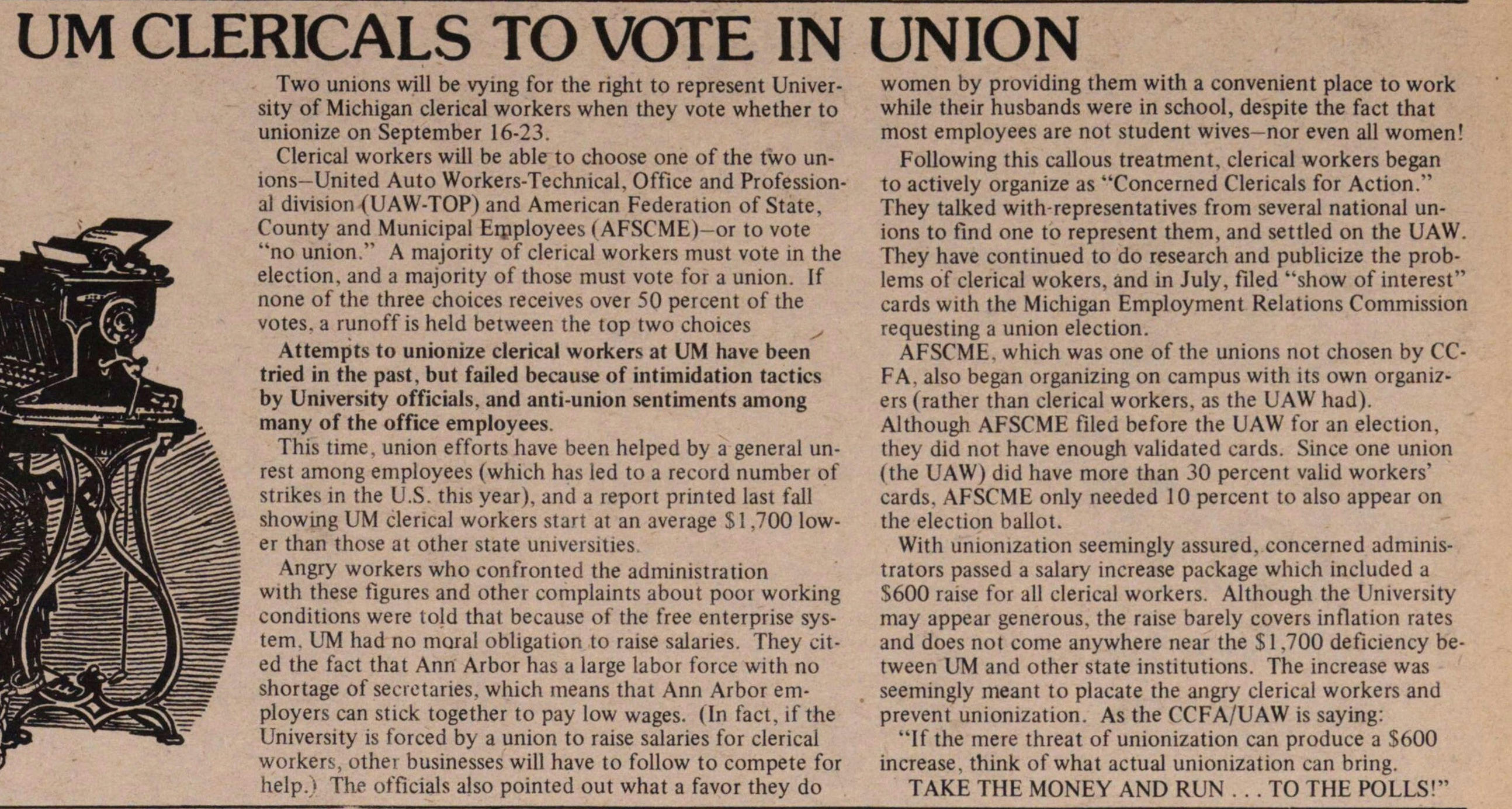 Two unions will be vying for the right to represent University of Michigan clerical workers when they vote whether to unionize on September 16-23.

Clerical workers will be able to choose one of the two unions- United Auto Workers-Technical, Office and Professional division (UAW-TOP) and American Federation of State, County and Municipal Employees ( AFSCME)- or to vote "no union." A majority of clerical workers must vote in the election, and a majority of those must vote for a union. If none of the three choices receives over 50 percent of the votes, a runoff is held between the top two choices.

Attempts to unionize clerical workers at UM have been tried in the past, but failed because of intimidation tactics by University officials, and anti-union sentiments among many of the office employees.

This time, union efforts have been helped by a general unrest among employees (which has led to a record number of strikes in the U.S. this year), and a report printed last fall showing UM clerical workers start at an average $ 1,700 lower than those at other state universities.

Angry workers who confronted the administration with these figures and other complaints about poor working conditions were told that because of the free enterprise system, UM had no moral obligation to raise salaries. They cited the fact that Ann Arbor has a large labor force with no shortage of secretaries, which means that Ann Arbor employers can stick together to pay low wages. (In fact, if the University is forced by a union to raise salaries for clerical workers, other businesses will have to follow to compete for help.) The officials also pointed out what a favor they do women by providing them with a convenient place to work while their husbands were in school, despite the fact that most employees are not student wives- nor even all women!

Following this callous treatment, clerical workers began to actively organize as "Concerned Clericals for Action." They talked with representatives from several national unions to find one to represent them, and settled on the UAW. They have continued to do research and publicize the problems of clerical workers, and in July, filed "show of interest" cards with the Michigan Employment Relations Commission requesting a union election.

AFSCME, which was one of the unions not chosen by CCFA, also began organizing on campus with its own organizers (rather than clerical workers, as the UAW had). Although AFSCME filed before the UAW for an election, they did not have enough validated cards. Since one union (the UAW) did have more than 30 percent valid workers' cards, AFSCME only needed 10 percent to also appear on the election ballot.

With unionization seemingly assured, concerned administrators passed a salary increase package which included a $600 raise for all clerical workers. Although the University may appear generous, the raise barely covers inflation rates and does not come anywhere near the $1,700 deficiency between UM and other state institutions. The increase was seemingly meant to placate the angry clerical workers and prevent unionization. As the CCFAUAW is saying: