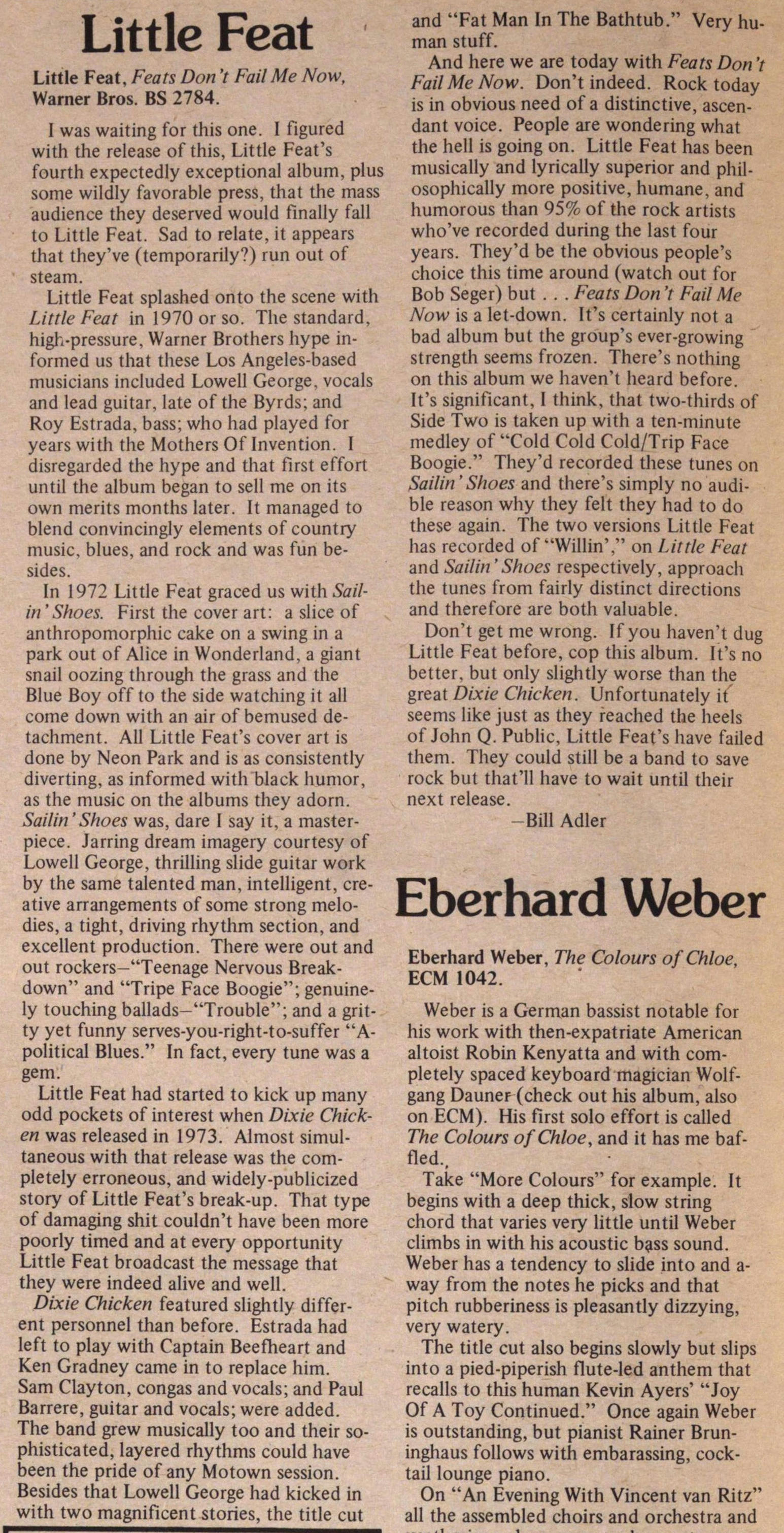 Little Feat, Feats Don 't Fail Me Now, Warner Bros. BS 2784. 1 was waiting for this one. I figured with the release of this, Little Feat's fourth expectedly exceptional album, plus some wildly favorable press, that the mass audience they deserved would finally fall to Little Feat. Sad to relate, it appears that they've (temporarily?) run out of steam. Little Feat splashed onto the scène with Little Feat in 1970 or so. The standard, high-pressure, Warner Brothers hype informed us that these Los Angeles-based musicians included Lowell George, vocals and lead guitar, late of the Byrds; and Roy Estrada, bass; who had played for years with the Mothers Of Invention. I disregarded the hype and that first effort until the album began to sell me on its own merits months later. It managed to blend convincingly elements of country music, blues, and rock and was fun besides. In 1972 Little Feat graced us with Sailin' Shoes. First the cover art: a slice of anthropomorphic cake on a swing in a park out of Alice in Wonderland, a giant snail oozing through the grass and the Blue Boy off to the side watching it all come down with an air of bemused detachment. All Little Feat's cover art is done by Neon Park and is as consistently diverting, as informed with black humor, as the music on the albums they adorn. Sailin' Shoes was, da re I say it, a masterpiece. Jarring dream imagery courtesy of Lowell George, thrilling slide guitar work by the same talented man, intelligent, creative arrangements of some strong melodies, a tight, driving rhythm section, and excellent production. There were out and out rockers- "Teenage Nervous Breakdown" and "Tripe Face Boogie"; genuinely touching ballads-"Trouble"; and a gritty yet funny serves-you-right-to-suffer "Apolitical Blues." In fact, every tune was a gem. Little Feat had started to kick up many odd pockets of interest when Dixie Chicken was released in 1973. Almost simultaneous with that release was the completely erroneous, and widely-publicized story of Little Feat's break-up. That type of damaging shit couldn't have been more poorly timed and at every opportunity Little Feat broadcast the message that they were indeed alive and well. Dixie Chicken featured slightly different personnel than before. Estrada had left to play with Captain Beefheart and Ken Gradney came in to replace him. Sam Clayton, congas and vocals; and Paul Barreré, guitar and vocals; were added. The band grew musically too and their sophisticated, layered rhythms could have been the pride of any Motown session. Besides that Lowell George had kicked in with two magnificent stories, the title cut and "Fat Man In The Bathtub." Very human stuff. And here we are today with Feats Don 't FailMeNow. Don't indeed. Rock today is in obvious need of a distinctive, ascendant voice. People are wondering what the heil is going on. Little Feat has been musically and lyrically superior and philosophically more positive, humane, and humorous than 95% of the rock artists who've recorded during the last four years. They'd be the obvious people's choice this time around (watch out for Bob Seger) but . . . Feats Don 't Fail Me Now is a let-down. It's certainly not a bad album but the group's ever-growing strength seems frozen. There's nothing on this album we haven't heard before. It's significant, I think, that two-thirds of Side Two is taken up with a ten-minute medley of "Cold Cold ColdTrip Face Boogie." They'd recorded these tunes on Sailin' Shoes and there's simply no audible reason why they feit they had to do these again. The two versions Little Feat has recorded of "Willin'," on Little Feat and Sailin' Shoes respectively, approacli the tunes from fairly distinct directions and therefore are both valuable. Don't get me wrong. If you haven't dug Little Feat before, cop this album. It's no better. but only slightly worse than the great Dixie Chicken. Unfortunately it seems like just as they feached the heels of John Q. Public, Little Feat's have failed them. They could still be a band to save rock but that'll have to wait until their next release.