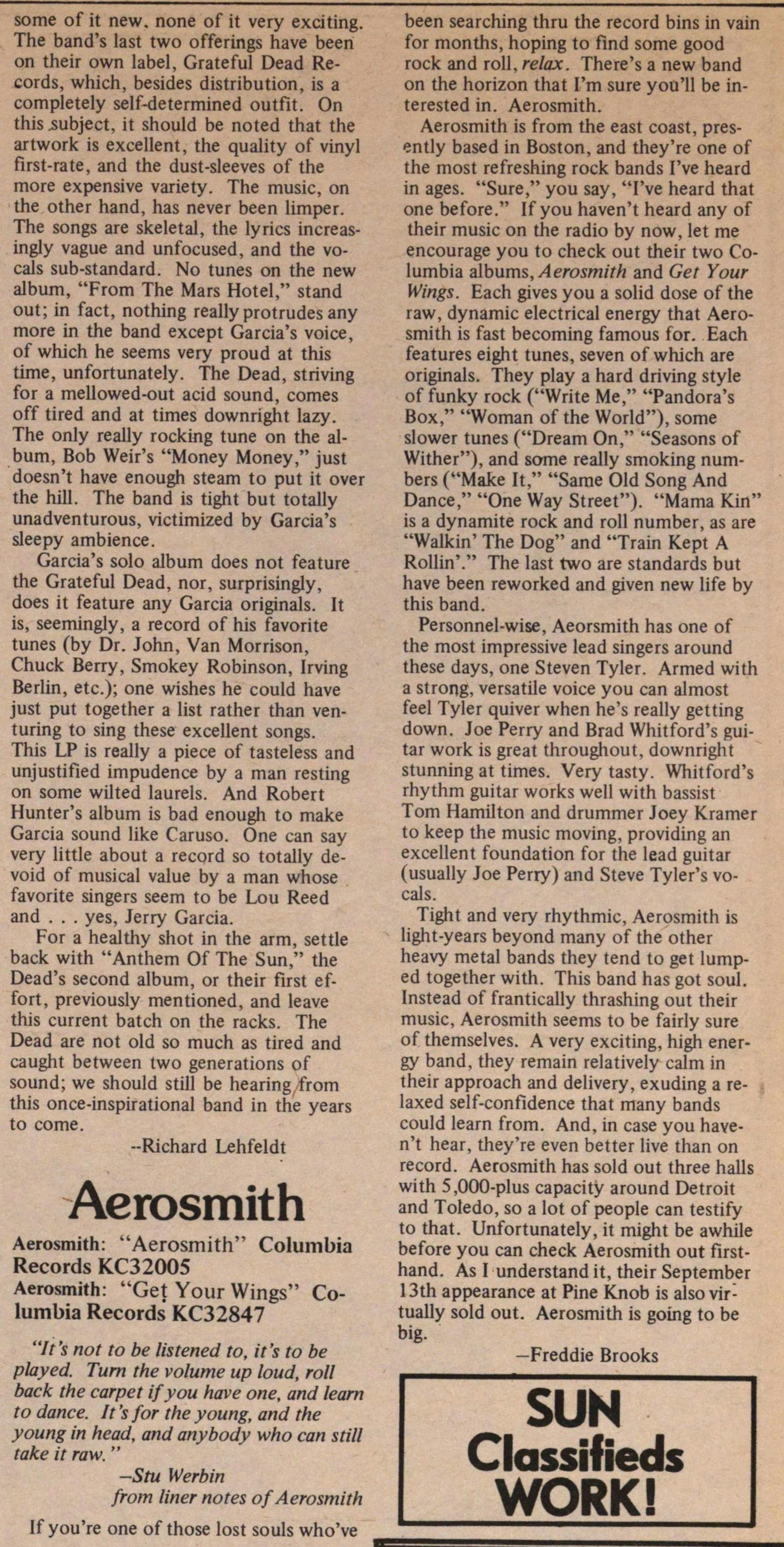 Aerosmith: "Aerosmith" Columbia Records KC32005 Aerosmith: "Get Your Wings" Columbia Records KC32847 "It's not to be lis tened to, it's to be played. Turn the volume up loud, roll back the carpet ifyou have one, and leam to dance. It 's for the young, and the young in head, and anybody who can still take it raw. " -Stu Werbin from liner notes of Aerosmith If you're one of those lost souls who've been searching thru the record bins in vain for months, hoping to find some good rock and roll, relax. There's a new band on the horizon that I'm sure you'll be interested in. Aerosmith. Aerosmith is from the east coast, presently based in Boston, and they're one of the most refreshing rock bands I've heard in ages. "Sure," you say, "I've heard that one before." If you haven't heard any of their music on the radio by now, let me encourage you to check out their two Columbia albums, Aerosmith and Get Your Wings. Each gives you a solid dose of the raw, dynamic electrical energy that Aerosmith is fast becoming famous for. Each features eight tunes, seven of which are origináis. They play a hard driving style of funky rock ("Write Me," "Pandora's Box," "Woman of the World"), some slower tunes ("Dream On," "Seasons of Wither"), and some really smoking numbers ("Make It," "Same Oíd Song And Dance," "One Way Street"). "Mama Kin" is a dynamite rock and roll number, as are "Walkin' The Dog" and "Train Kept A Rollin'." The last two are standards but have been reworked and given new life by this band. Personnel-wise, Aeorsmith has one of the most impressive lead singers around these days, one Steven Tyler. Armed with a strong, versatile voice you can almost feel Tyler quiver when he's really getting down. Joe Perry and Brad Whitford's guitar work is great throughout, downright stunning at times. Very tasty. Whitford's rhythm guitar works well with bassist Torn Hamilton and drummer Joey Kramer to keep the music moving, providing an excellent foundation for the lead guitar (usually Joe Perry) and Steve Tyler's vocals. Tight and very rhythmic, Aerosmith is light-years beyond many of the other heavy metal bands they tend to get lumped together with. This band has got soul. Instead of frantically thrashing out their music, Aerosmith seems to be fairly sure of themselves. A very exciting, high energy band, they remain relatively calm in their approach and delivery, exuding a relaxed self-confidence that many bands could learn from. And, in case you haven't hear, they're even better live than on record. Aerosmith has sold out three halls with 5,000-plus capacity around Detroit and Toledo, so a lot of people can testify to that. Unfortunately, it might be awhile before you can check Aerosmith out firsthand. As I understand it, their September 13th appearance at Pine Knob is also virtually sold out. Aerosmith is going to be big.