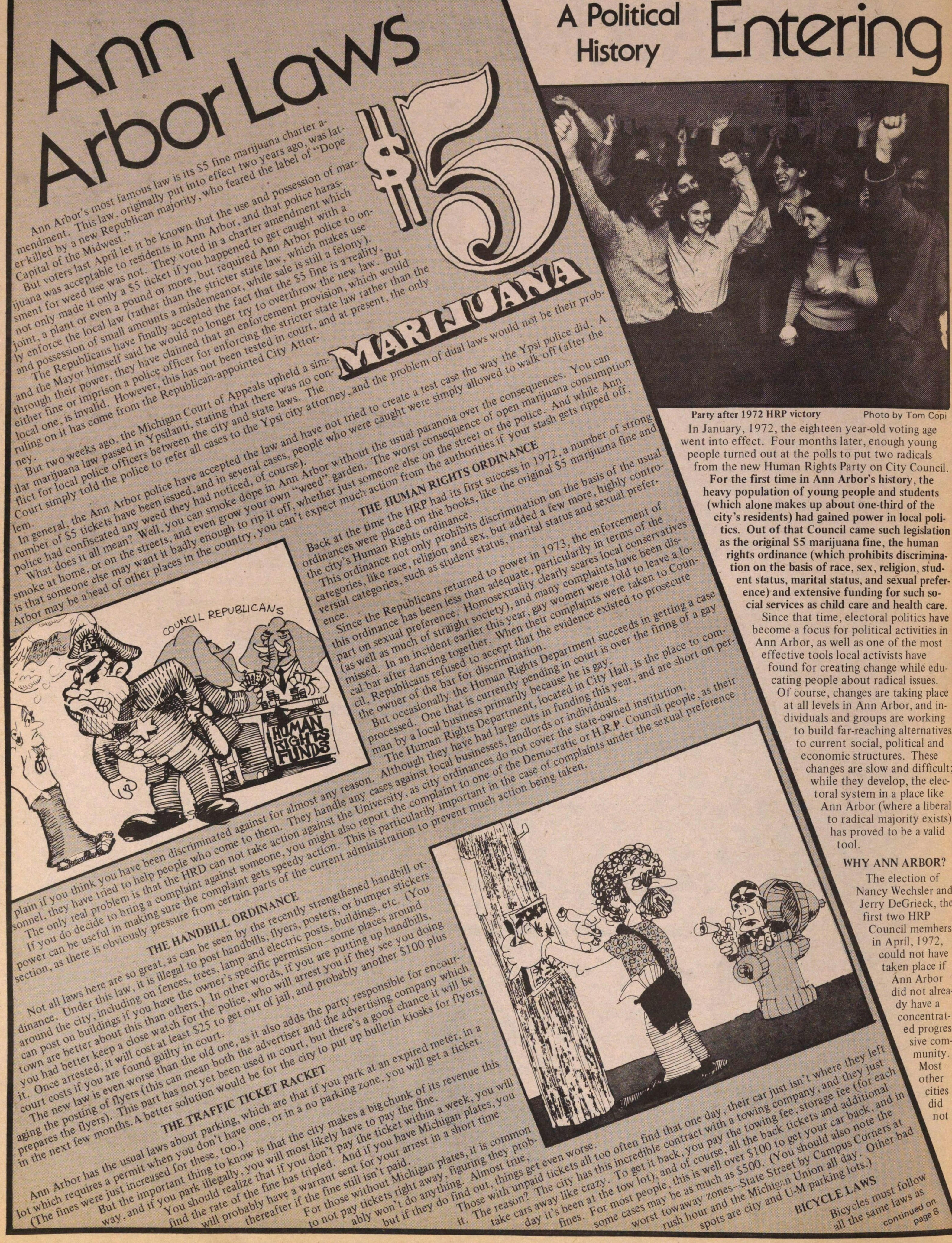 Ann Arbor's most famous law is its $5 fine marijuana charter amendment. This law, originally put into effect two years ago was later killed by a new Republican majority, who feared the label of "Dope Capital of the Midwest."

But voters last April let it be known that the use and possession of marijuana was acceptable to residents in Ann Arbor, and that police harassment for weed use was not. They voted in a charter amendment which not only made it only a $5 ticket if you happened to get caught with a joint, a plant or even a pound or more, but required Ann Arbor police to only enforce the local law (rather than the stricter state law, which makes use and possession of small amounts a misdemeanor, while sale is still a felony).

The Republicans have finally accepted the fact that the $5 fine is a reality and the Mayor himself said he would no longer try to overthrow the new law. But through their power, they have claimed that an enforcement provision, which would either fine or imprison a police officer for enforcing the stricter state law rather than the local one, is invalid. However, this has not been tested in court, and at present, the only ruling on it has come from the Republican-appointed City Attorney.

But two weeks ago, the Michigan Court of Appeals upheld a similar marijuana law passed in Ypsilanti, stating that there was no conflict for local police officers between the city and state laws.  The Court simply told the police to refer all cases to the Ypsi city attorney, and the problem of dual laws would not be their problem.

In general, the Ann Arbor police have accepted the law and have not tried to create a test case the way the Ypsi police did. A number of $5 tickets have been issued, and in several cases, people who were caught were simply allowed to walk off (after the police had confiscated any weed they had noticed, of course).

What does it all mean? Well, you can smoke dope in Ann Arbor without the usual paranoia over consequences. You can smoke at home, or on the streets, and even grow your own "weed" garden. The worst consequence of open marijuana consumption is that someone else may want it badly enough to rip it off, whether just someone else on the street or the police. And while Ann Arbor may be ahead of other places in the country, you can't except much action from the authorities if your stash gets ripped off.

Back at the time the HRP had its first success in 1972, a number of strong ordinances were placed on the books, like the original $5 marijuana fine and the city's Human Rights ordinance.

This ordinance not only prohibits discrimination on the basis of the usual categories, like race, religion, and sex, but added a few more, high controversial categories, such as student status, marital status, and sexual preference.

Since the Republicans returned to power in 1973, the enforcement of this ordinance has been less than adequate, particularly in terms of the part on sexual preference. Homosexuality clearly scares local conservatives (as well as much of straight society), and many complaints have been dismissed. In an incident earlier this year, gay women were told to leave a local bar after dancing together. When their complaints were taken to the Council, Republicans refused to accept that the evidence existed to prosecute the owner of the bar for discrimination.

But occasionally the Human Rights Department succeeds in getting a case processed. One that is currently pending in court is over the firing of a gay man by a local business primarily because he is gay.

The Human Rights Department, located in City Hall, is the place to complain if you think you have been discriminated against for almost any reason. Although they have had large cuts in funding this year, and are short on personnel, they have tried to help people who come to them. They handle any cases against local businesses, landlords or individuals.

The only real problem is that the HRD can not take action against the University, as city ordinances do not cover the state-owned institution.

If you do decide to bring a complaint against someone, you might also report the complaint to one of the Democratic or H.R.P Council people, as their power can be useful in making sure the complaint gets speedy action. This is particularly important in the case of complaints under the sexual preference section, as there is obviously pressure from certain parts of the current administration to prevent much action being taken.

Not all laws here are so great, as can be seen by the recently strengthened handbill ordinance. Under this law, it is illegal to post handbills, flyers, posters, or bumper stickers around the city, including on fences, trees, lamp and electric posts, buildings, etc. (You can post on buildings if you have the owner's specific permission - some places around town are better about this than others.) In other words, if you are putting up handbills, you had better keep a close watch for the police, who will arrest you if they see you doing it. Once arrested, it will cost at least $25 to get out of jail, and probably another $100 plus court costs if you are found guilty in court.

The new law is even worse than the old one, as it also adds the party responsible for encouraging the poster of flyers (this can mean both the advertiser and the advertising company which prepares the flyers). This part has not yet been used in court, but there's a good chance it will be in the next few months. A better solution would be for the city to put up bulletin kiosks for flyers.

Ann Arbor has the usual laws about parking, which are that if you park at an expired meter, in a lot which requires a permit when you don't have one, or in a no parking zone, you will get a ticket. (The fines were just increased for those, too.)

But the important thing to know is that the city makes a big chunk of its revenue this way, and if you park illegally, you will most likely have to pay the fine.

You should realize that if you don't pay the ticket within a week, you will find the rate of the fine has tripled. And if you have Michigan plates, you will probably have a warrant sent for your arrest in a short time thereafter if the fine still isn't paid.

For those without Michigan plates, it is common to not pay tickets right away, figuring they probably won't do anything. Almost true, but if they do find out, things get even worse.

Those with unpaid tickets all too often find that  one day, their car just isn't where they left it. The reason? The city has this incredible contract with a towing company and they just take cars away like crazy. To get it back, you pay the towing, the storage fee (for each day it's been at the tow lot), and of course, all the back tickets and additional fines. For most people, this is well over $100 to get your car back, and in some cases may be as much as $500. (You should also note the worst towaway zones - State Street by Campus Corners at rush hour and the Michigan Union all day. Other bad spots are city and U-M parking lots.

Bicycles must follow all the same laws as cars when riding in the streets and the city also makes revenue (particularly in the spring) by targeting bicyclists.

One other quick note on bicycles. The city requires that you have a bike Iicense (which you can get from the City Clerk's office at City Hall). Also, an ordinance just passed this month requires all bike sales, private and corporate, be registered with the city. This is a major town for bike rip-offs, and this latest law is a small attempt to slow down the thefts.