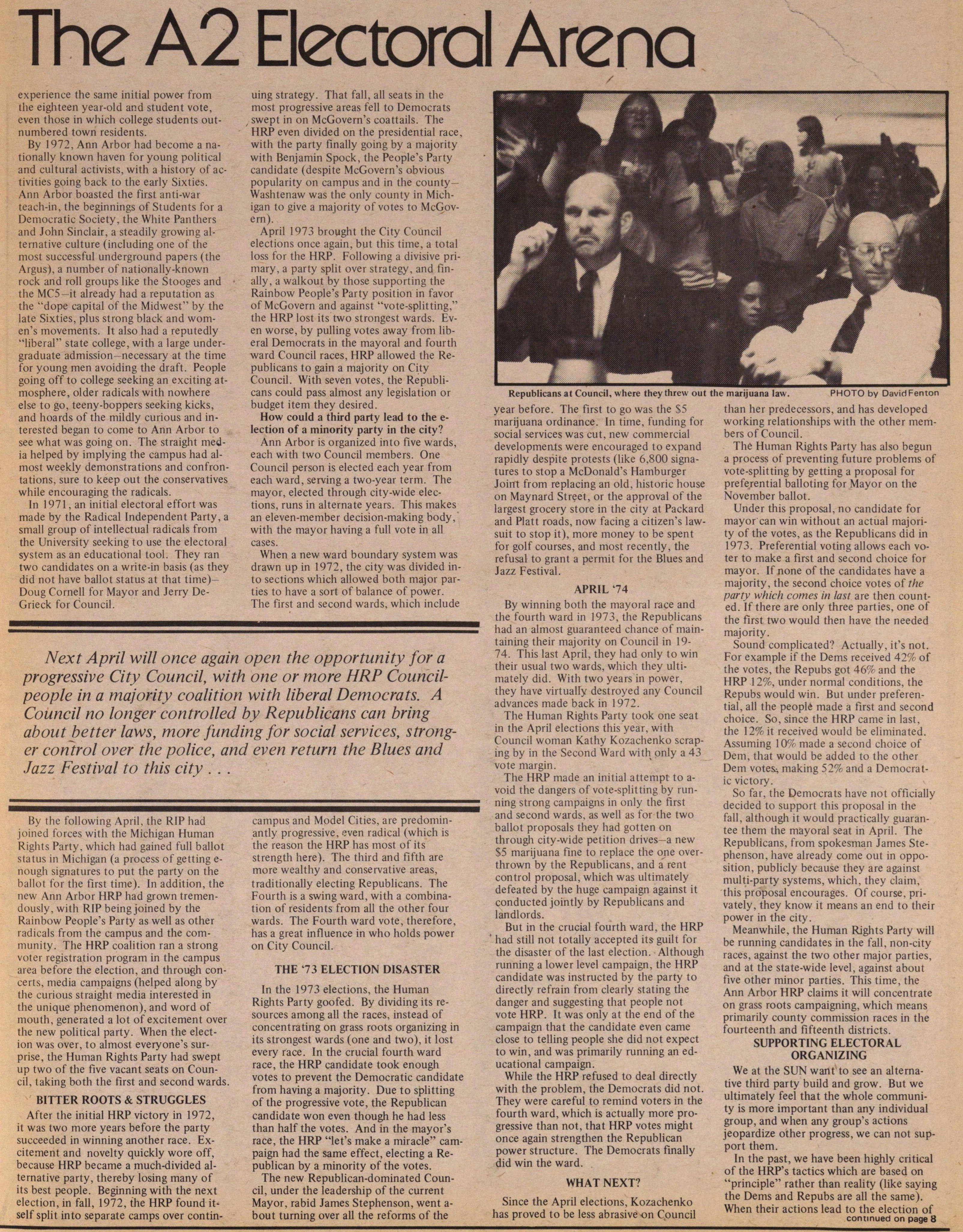 For the first time in Ann Arbor's history, the heavy population of young people and students (which alone makes up about one-third of the city's residents) had gained power in local politics. Out of that Council came such legislation as the original $5 marijuana fine, the human rights ordinance (which prohibits discrimination on the basis of race, sex, religion, student status, marital status, and sexual preference) and extensive funding for such social services as child care and health care.

Since that time, electoral politics have become a focus for political activities in Ann Arbor, as well as one of the most effective tools local activists have found for creating change while educating people about radical issues. Of course, changes are taking place at all levels in Ann Arbor, and individuals and groups are working to build far-reaching alternatives to current social, political and economic structures. These changes are slow and difficult; while they develop, the electoral system in a place like Ann Arbor (where a liberal to radical majority exists) has proved to be a valid tool.

The election of Nancy Wechsler and Jerry DeGrieck. the first two HRP Council members in April, 1972, could not have taken place if Ann Arbor did not already have a concentrated progressive community. Most other cities did not experience the same initial power from the eighteen year-old and student vote, even those in which college students outnumbered town residents. By 1972, Ann Arbor had become a nationally known haven for young political and cultural activists, with a history of activities going back to the early Sixties. Ann Arbor boasted the first anti-war teach-in, the beginnings of Students for a Democratic Society, the White Panthers and John Sinclair, a steadily growing alternative culture (including one of the most successful underground papers (the Argus), a number of nationally-known rock and roll groups like the Stooges and the MC5- it already had a reputation as the "dope capital of the Midwest" by the late Sixties, plus strong black and women's movements. It also had a reputedly "liberal" state college, with a large undergraduate admission-necessary at the time for young men avoiding the draft. People going off to college seeking an exciting atmosphere, older radicals with nowhere else to go, teeny-boppers seeking kicks, and hoards of the mildly curious and interested began to come to Ann Arbor to see what was going on. The straight media helped by implying the campus had almost weekly demonstrations and confrontations, sure to keep out the conservatives while encouraging the radicals.

In 1971 , an initial electoral effort was made by the Radical Independent Party, a small group of intellectual radicals from the University seeking to use the electoral system as an educational tool. They ran two candidates on a write-in basis (as they did not have ballot status at that time)--Doug Cornell for Mayor and Jerry DeGrieck for Council.

By the following April, the RIP had joined forces with the Michigan Human Rights Party, which had gained full ballot status in Michigan (a process of getting enough signatures to put the party on the ballot for the first time). In addition, the new Ann Arbor HRP had grown tremendously, with RIP being joined by the Rainbow People's Party as well as other radicals from the campus and the community. The HRP coalition ran a strong voter registration program in the campus area before the election, and through concerts, media campaigns (helped along by the curious straight media interested in the unique phenomenon), and word of mouth, generated a lot of excitement over the new political party. When the election was over, to almost everyone's surprise, the Human Rights Party had swept up two of the five vacant seats on Council, taking both the first and second wards.

After the initial HRP victory in 1972, it was two more years before the party succeeded in winning another race. Excitement and novelty quickly wore off, because HRP became a much-divided alternative party, thereby losing many of its best people. Beginning with the next election, in fall, 1972, the HRP found itself split into separate camps over continuing strategy. That fall, all seats in the most progressive areas fell to Democrats swept in on McGovern's coattails. The HRP even divided on the presidential race, with the party finally going by a majority with Benjamin Spock, the People's Party candidate (despite McGovern's obvious popularity on campus and in the county- Washtenaw was the only county in Michigan to give a majority of votes to McGovern).

April 1973 brought the City Council elections once again, but this time, a total loss for the HRP. Following a divisive primary, a party split over strategy, and finally, a walkout by those supporting the Rainbow People's Party position in favor of McGovern and against "vote-splitting," the HRP lost its two strongest wards. Even worse, by pulling votes away from liberal Democrats in the mayoral and fourth ward Council races, HRP allowed the Republicans to gain a majority on City Council. With seven votes, the Republicans could pass almost any legislation or budget item they desired.

How could a third party lead to the election of a minority party in the city?

Ann Arbor is organized into five wards, each with two Council members. One Council person is elected each year from each ward, serving a two-year term. The mayor, elected through city-wide elections, runs in alternate years. This makes an eleven-member decision-making body, with the mayor having a full vote in all cases.

When a new ward boundary system was drawn up in 1972, the city was divided into sections which allowed both major parties to have a sort of balance of power. The first and second wards, which include campus and Model Cities, are predominantly progressive, even radical (which is the reason the HRP has most of its strength here). The third and fifth are more wealthy and conservative areas, traditionally electing Republicans. The Fourth is a swing ward, with a combination of residents from all the other four wards. The Fourth ward vote, therefore, has a great influence in who holds power on City Council.

In the 1973 elections, the Human Rights Party goofed. By dividing its resources among all the races, instead of concentrating on grass roots organizing in its strongest wards (one and two), it lost every race. In the crucial fourth ward race, the HRP candidate took enough votes to prevent the Democratic candidate from having a majority. Due to splitting of the progressive vote, the Republican candidate won even though he had less than half the votes. And in the mayor's race, the HRP "let's make a miracle" campaign had the same effect, electing a Republican by a minority of the votes.

The new Republican-dominated Council, under the leadership of the current Mayor, rabid James Stephenson, went about turning over all the reforms of the year before. The first to go was the $5 marijuana ordinance. In time, funding for social services was cut, new commercial developments were encouraged to expand rapidly despite protests (like 6,800 signatures to stop a McDonald's Hamburger Joint from replacing an old, historic house on Maynard Street, or the approval of the largest grocery store in the city at Packard and Platt roads, now facing a citizen's lawsuit to stop it), more money to be spent for golf courses, and most recently, the refusal to grant a permit for the Blues and Jazz Festival.

By winning both the mayoral race and the fourth ward in 1973, the Republicans had an almost guaranteed chance of maintaining their majority on Council in 1974. This last April, they had only to win their usual two wards, which they ultimately did. With two years in power, they have virtually destroyed any Council advances made back in 1972.

The Human Rights Party took one seat in the April elections this year, with Council woman Kathy Kozachenko scraping by in the Second Ward with only a 43 vote margin.

The HRP made an initial attempt to avoid the dangers of vote-splitting by running strong campaigns in only the first and second wards. as well as for the two ballot proposals they had gotten on through city-wide petition drives-a new $5 marijuana fine to replace the one overthrown by the Republicans, and a rent control proposal, which was ultimately defeated by the huge campaign against it conducted jointly by Republicans and landlords.

But in the crucial fourth ward, the HRP had still not totally accepted its guilt for the disaster of the last election. Although running a lower level campaign, the HRP candidate was instructed by the party to directly refrain from clearly stating the danger and suggesting that people not vote HRP. It was only at the end of the campaign that the candidate even came close to telling people she did not expect to win, and was primarily running an educational campaign.

While the HRP refused to deal directly with the problem, the Democrats did not. They were careful to remind voters in the fourth ward, which is actually more progressive than not, that HRP votes might once again strengthen the Republican power structure. The Democrats finally did win the ward.

Since the April elections, Kozachenko has proved to be less abrasive-on Council than her predecessors. and has developed working relationships with the other members of Council.

The Human Rights Party has also begun a process of preventing future problems of vote-splitting by getting a proposal for preferential balloting for Mayor on the November ballot.

Under this proposal, no candidate for mayor can win without an actual majority of the votes, as the Republicans did in 1973. Preferential voting allows each voter to make a first and second choice for mayor. If none of the candidates have a majority, the second choice votes of the party which comes in last are then counted. If there are only three parties, one of the first two would then have the needed majority.

Sound complicated? Actually, it's not. For example if the Dems received 42% of the votes, the Repubs got 46% and the HRP 12%, under normal conditions, the Repubs would win. But under preferential, all the people made a first and second choice. So, since the HRP came in last, the 12% it received would be eliminated. Assuming 10% made a second choice of Dem that would be added to the other Dem votes making 52% and a Democratic victory.

So far, the Democrats have not officially decided to support this proposal in the fall, although it would practically guarantee them the mayoral seat in April. The Republicans, from spokesman James Stephenson, have already come out in opposition, publicly because they are against multi-party systems, which, they claim, this proposal encourages. Of course, privately, they know it means an end to their power in the city.

Meanwhile, the Human Rights Party will be running candidates in the fall, non-city races, against the two other major parties, and at the state-wide level, against about five other minor parties. This time, the Ann Arbor HRP claims it will concentrate on grass roots campaigning, which means primarily county commission races in the fourteenth and fifteenth districts.

We at the SUN want to see an alternative third party build and grow. But we ultimately feel that the whole community is more important than any individual group, and when any group's actions jeopardize other progress, we can not support them.

In the past, we have been highly critical of the HRP's tactics which are based on "principle" rather than reality (like saying the Dems and Repubs are all the same). When their actions lead to the election of continued on page 8

Republicans at council, when they threw out the marijuana law. Photo by David Fenton

Next April will once again open the opportunity for a progressive City Council, with one or more HRP Councilpeople in a majority coalition with liberal Democrats. A Council no longer controlled by Republicans can bring about better laws, more funding for social services, stronger control over the police, and even return the Blues and Jazz Festival to this city . . .