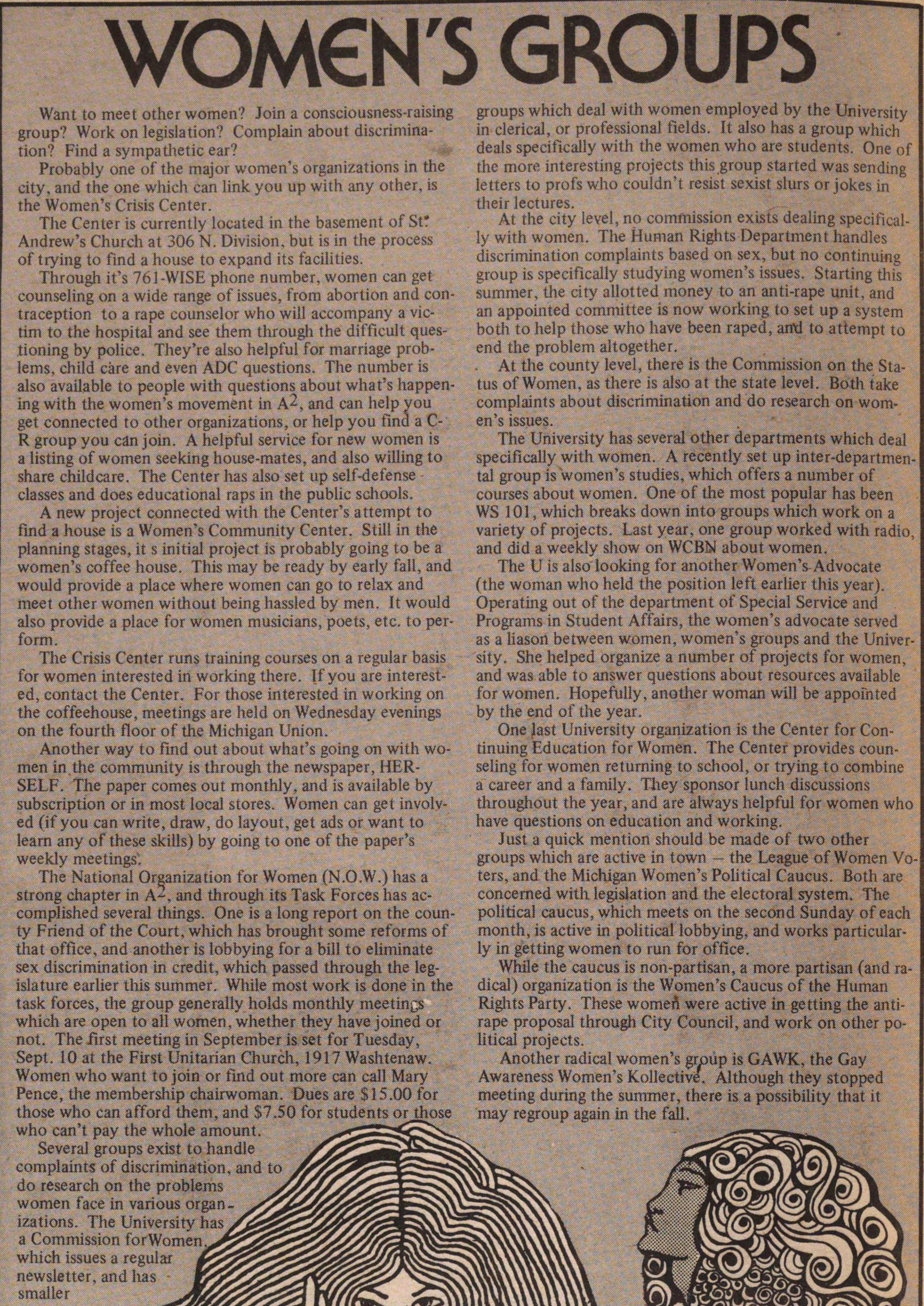 Want to meet other women? Join a consciousness-raising group? Work on legislation? Complain about discrimination? Find a sympathetic ear?

Probably one of the major women's organizations in the city, and the one which can link you up with any other, is the Women's Crisis Center.

The Center is currently located in the basement of St. Andrew's Church at 306 N. Division, but is in the process of trying to find a house to expand its facilities.

Through its 761-WISE phone number, women can get counseling on a wide range of issues, from abortion and contraception to a rape counselor who will accompany a victim to the hospital and see them through the difficult questioning by police. They're also helpful for marriage problems, child care and even ADC questions. The number is also available to people with questions about what's happening with the women's movement in A², and can help you get connected to other organizations, or help you find a CR group you can join. A helpful service for new women is a listing of women seeking house-mates, and also willing to share childcare. The Center has also set up self-defense classes and does educational raps in the public schools.

A new project connected with the Center's attempt to find a house is a Women's Community Center. Still in the planning stages, its initial project is probably going to be a women's coffee house. This may be ready by early fall, and would provide a place where women can go to relax and meet other women without being hassled by men. It would also provide a place for women musicians, poets, etc. to perform.

Another way to find out about what's going on with women in the community is through the newspaper, HERSELF. The paper comes out monthly, and is available by subscription or in most local stores. Women can get involved (if you can write, draw, do layout, get ads or want to learn any of these skills) by going to one of the paper's weekly meetings.

The National Organization for Women (N.O.W.) has a strong chapter in A², and through its Task Forces has accomplished several things. One is a long report on the county Friend of the Court, which has brought some reforms of that office, and another is lobbying for a bill to eliminate sex discrimination in credit, which passed through the legislature earlier this summer. While most work is done in the task forces, the group generally holds monthly meetings which are open to all women, whether they have joined or not. The first meeting in September is set for Tuesday, Sept. 10 at the First Unitarian Church, 1917 Washtenaw. Women who want to join or find out more can call Mary Pence, the membership chairwoman. Dues are $15.00 for those who can afford them, and $7.50 for students or those who can't pay the whole amount.

Several groups exist to handle complaints of discrimination, and to do research on the problems women face in various organizations. The University has a Commission for Women, which issues a regular newsletter, and has smaller groups which deal with women employed by the University in clerical, or professional fields. It also has a group which deals specifically with the women who are students. One of the more interesting projects this group started was sending letters to profs who couldn't resist sexist slurs or jokes in their lectures.

At the city level, no commission exists dealing specifically with women. The Human Rights Department handles discrimination complaints based on sex, but no continuing group is specifically studying women's issues. Starting this summer, the city allotted money to an anti-rape unit, and an appointed committee is now working to set up a system both to help those who have been raped, and to attempt to end the problem altogether.

At the county level, there is the Commission on the Status of Women, as there is also at the state level. Both take complaints about discrimination and do research on women's issues.

The University has several other departments which deal specifically with women. A recently set up inter-departmental group is women's studies, which offers a number of courses about women. One of the most popular has been WS 101, which breaks down into groups which work on a variety of projects. Last year, one group worked with radio, and did a weekly show on WCBN about women.

The U is also looking for another Women's Advocate (the woman who held the position left earlier this year). Operating out of the department of Special Service and Programs in Student Affairs, the women's advocate served as a liason between women, women's groups and the University. She helped organize a number of projects for women, and was able to answer questions about resources available for women. Hopefully, another woman will be appointed by the end of the year.

One last University organization is the Center for Continuing Education for Women. The Center provides counseling for women returning to school, or trying to combine a career and a family. They sponsor lunch discussions throughout the year, and are always helpful for women who have questions on education and working.

Just a quick mention should be made of two other groups which are active in town - the League of Women Voters, and the Michigan Women's Political Caucus. Both are concerned with legislation and the electoral system. The political caucus, which meets on the second Sunday of each month, is active in political lobbying, and works particularly in getting women to run for office.

While the caucus is non-partisan, a more partisan (and radical) organization is the Women's Caucus of the Human Rights Party. These women  were active in getting the anti-rape proposal through City Council, and work on other political projects.

Another radical women's group is GAWK, the Gay Awareness Women's Kollective. Although they stopped meeting during the summer, there is a possibility that it may regroup again in the fall.