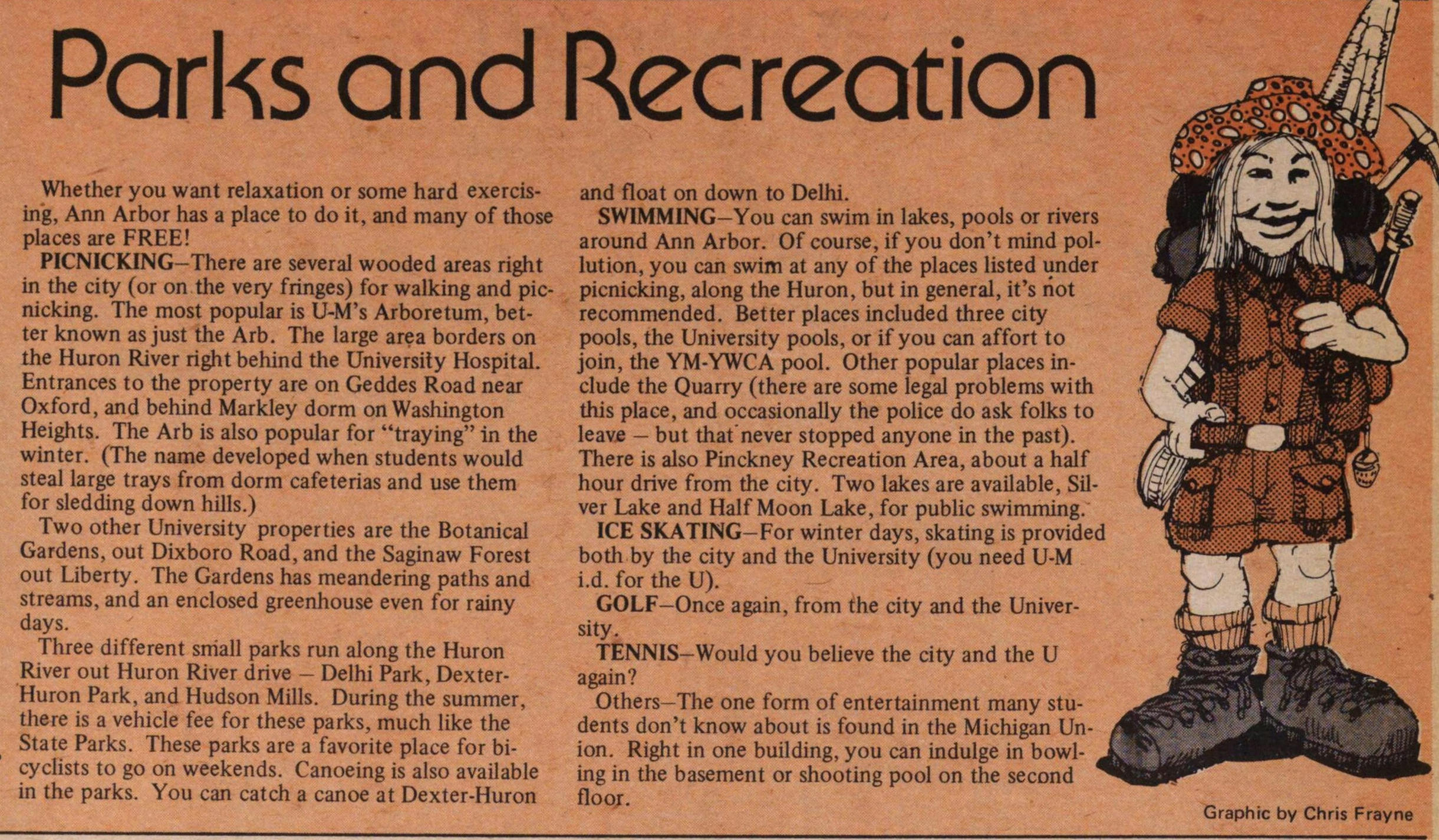 Whether you want relaxation or some hard exercising, Ann Arbor has a place to do it, and many of those places are FREE!

PICNICKING – There are several wooded areas right in the city (or on the very fringes) for walking and picnicking. The most popular is U-M's Arboretum, better known as just the Arb. The large area borders on the Huron River right behind the University Hospital. Entrances to the property are on Geddes Road near Oxford, and behind Markley dorm on Washington Heights. The Arb is also popular for "traying" in the winter. (The name developed when students would steal large trays from dorm cafeterias and use them for sledding down hills.)

Two other University properties are the Botanical Gardens, out Dixboro Road, and the Saginaw Forest out Liberty. The Gardens has meandering paths and streams, and an enclosed greenhouse even for rainy days.

Three different small parks run along the Huron River out Huron River drive – Delhi Park, Dexter-Huron Park, and Hudson Mills. During the summer, there is a vehicle fee for these parks, much like the State Parks. These parks are a favorite place for bicyclists to go on weekends. Canoeing is also available in the parks. You can catch a canoe at Dexter-Huron and float on down to Delhi.

SWIMMING – You can swim in lakes, pools or rivers around Ann Arbor. Of course, if you don't mind pollution, you can swim at any of the places listed under picnicking, along the Huron, but in general, it's not recommended. Better places included three city pools, the University pools, or if you can afford to join, the YM-YWCA pool. Other popular places include the Quarry (there are some legal problems with this place, and occasionally the police do ask folks to leave – but that never stopped anyone in the past). There is also Pinckney Recreation Area, about a half hour drive from the city. Two lakes are available, Silver Lake and Half Moon Lake, for public swimming.

ICE SKATING – For winter days, skating is provided both by the city and the University (you need U-M i.d. for the U).

GOLF – Once again, from the city and the University.

TENNIS – Would you believe the city and the U again?

Others – The one form of entertainment many students don't know about is found in the Michigan Union. Right in one building, you can indulge in bowling in the basement or shooting pool on the second floor.