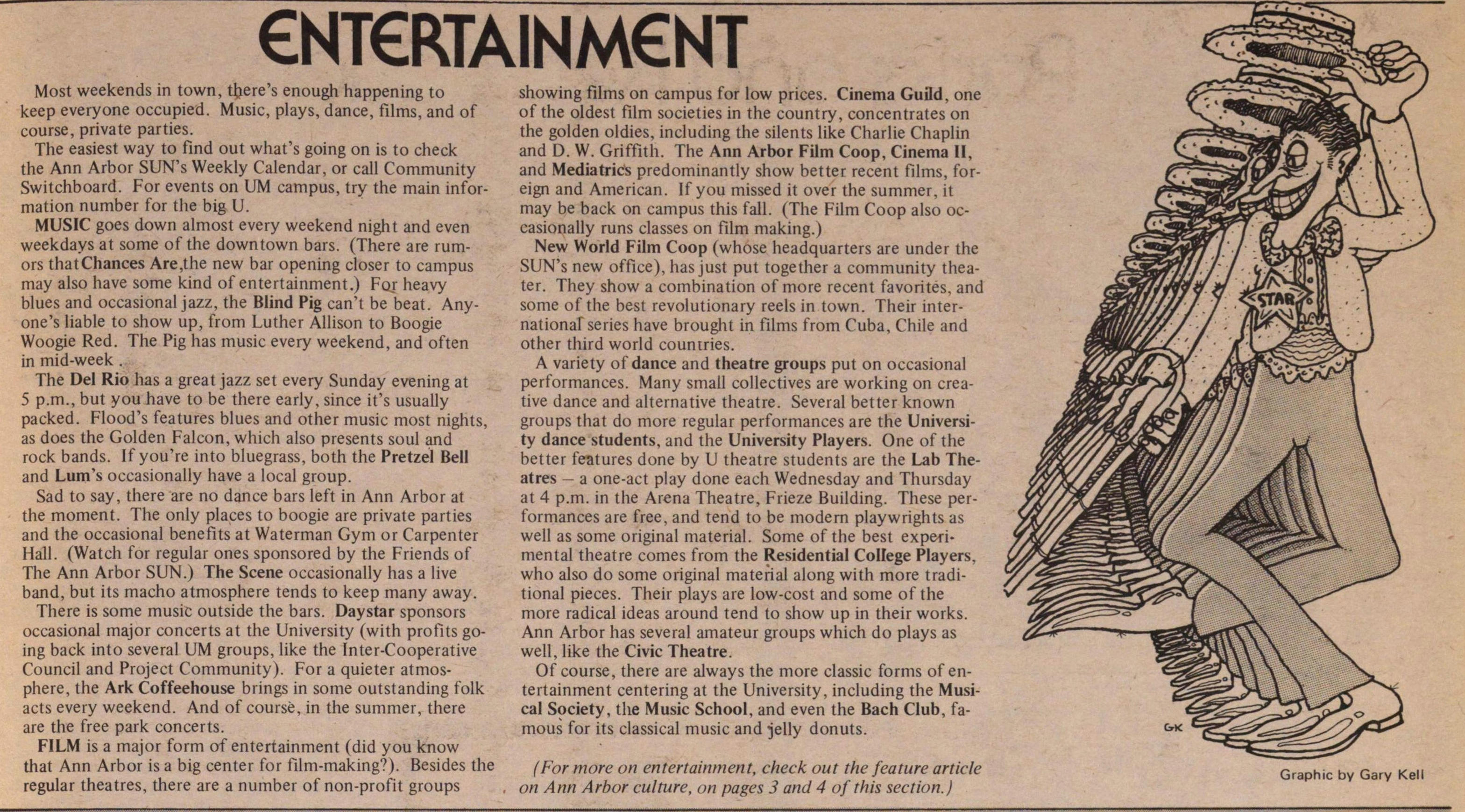 Most weekends in town, there's enough happening to keep everyone occupied. Music, plays, dance, films, and of course, private parties.

The easiest way to find out what's going on is to check the Ann Arbor SUN's Weekly Calendar, or call Community Switchboard. For events on UM campus, try the main information number for the big U.

MUSIC goes down almost every weekend night and even weekdays at some of the downtown bars. (There are rumors that Chances Are, the new bar opening closer to campus may also have some kind of entertainment.) For heavy blues and occasional jazz, the Blind Pig can't be beat. Anyone's liable to show up, from Luther Allison to Boogie Woogie Red. The Pig has music every weekend, and often in mid-week.

The Del Rio has a great jazz set every Sunday evening at 5 p.m., but you have to be there early, since it's usually packed. Flood's features blues and other music most nights, as does the Golden Falcon, which also presents soul and rock bands. If you're into bluegrass, both the Pretzel Bell and Lum's occasionally have a local group.

Sad to say, there are no dance bars left in Ann Arbor at the moment. The only places to boogie are private parties and the occasional benefits at Waterman Gym or Carpenter Hall. (Watch for regular ones sponsored by the Friends of The Ann Arbor SUN.) The Scene occasionally has a live band, but its macho atmosphere tends to keep many away.

There is some music outside the bars. Daystar sponsors occasional major concerts at the University (with profits going back into several UM groups, like the Inter-Cooperative Council and Project Community). For a quieter atmosphere, the Ark Coffeehouse brings in some outstanding folk acts every weekend. And of course, in the summer, there are the free park concerts.

FILM is a major form of entertainment (did you know that Ann Arbor is a big center for film-making?). Besides the regular theatres, there are a number of non-profit groups showing films on campus for low prices. Cinema Guild, one of the oldest film societies in the country, concentrates on the golden oldies, including the silents like Charlie Chaplin and D. W. Griffith. The Ann Arbor Film Coop, Cinema II, and Mediatrics predominantly show better recent films, foreign and American. If you missed it over the summer, it may be back on campus this fall. (The Film Coop also occasionally runs classes on film making.)

New World Film Coop (whose headquarters are under the SUN's new office), has just put together a community theater. They show a combination of more recent favorites, and some of the best revolutionary reels in town. Their international series have brought in films from Cuba, Chile and other third world countries.

A variety of dance and theatre groups put on occasional performances. Many small collectives are working on creative dance and alternative theatre. Several better known groups that do more regular performances are the University dance students, and the University Players. One of the better features done by U theatre students are the Lab Theatres - a one-act play done each Wednesday and Thursday at 4 p.m. in the Arena Theatre, Frieze Building. These performances are free, and tend to be modern playwrights as well as some original material. Some of the best experimental theatre comes from the Residential College Players, who also do some original material along with more traditional pieces. Their plays are low-cost and some of the more radical ideas around tend to show up in their works. Ann Arbor has several amateur groups which do plays as well, like the Civic Theatre.

Of course, there are always the more classic forms of entertainment centering at the University, including the Musical Society, the Music School, and even the Bach Club, famous for its classical music and jelly donuts.

(For more on entertainment, check out the feature article on Ann Arbor culture, on pages 3 and 4 of this section.)