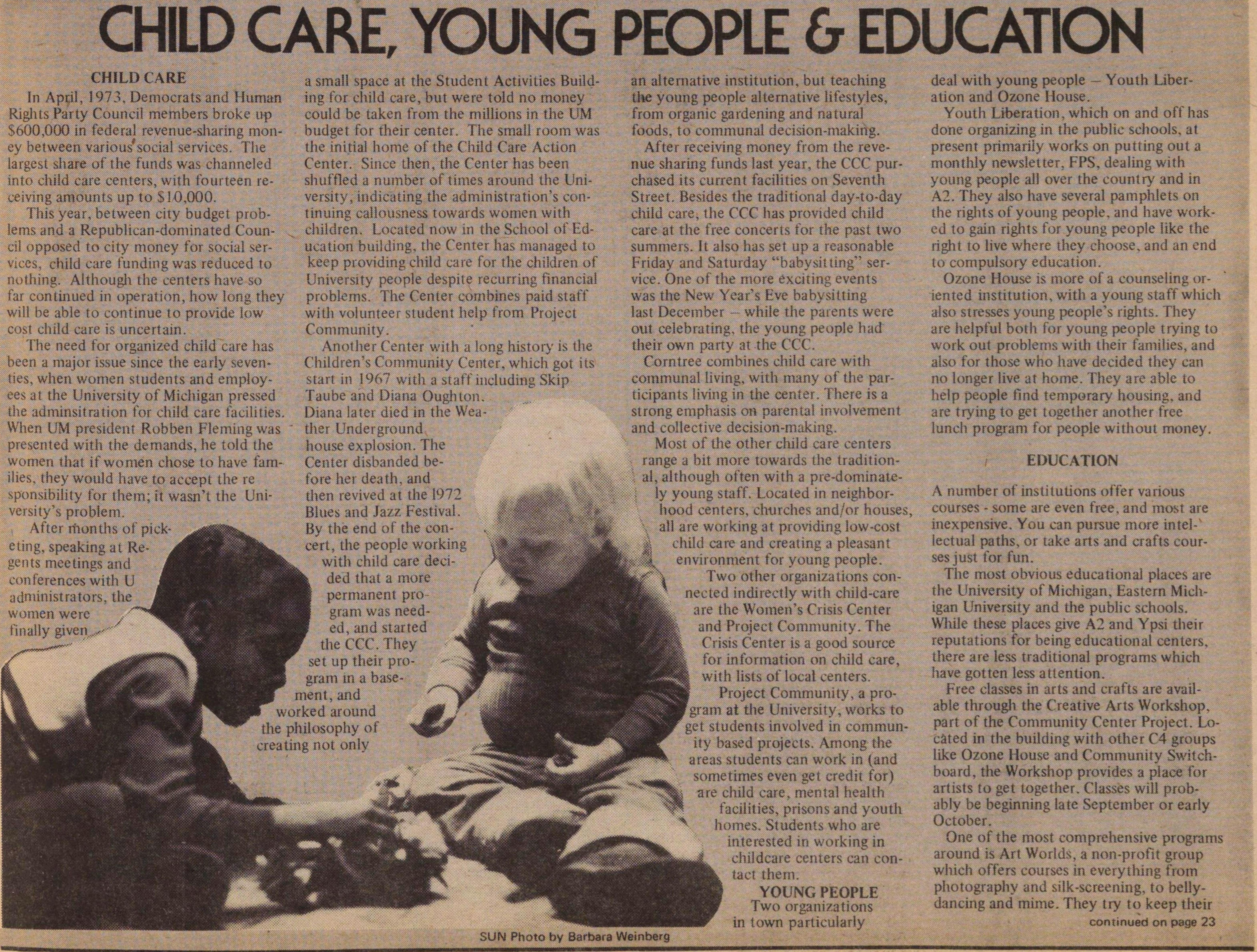 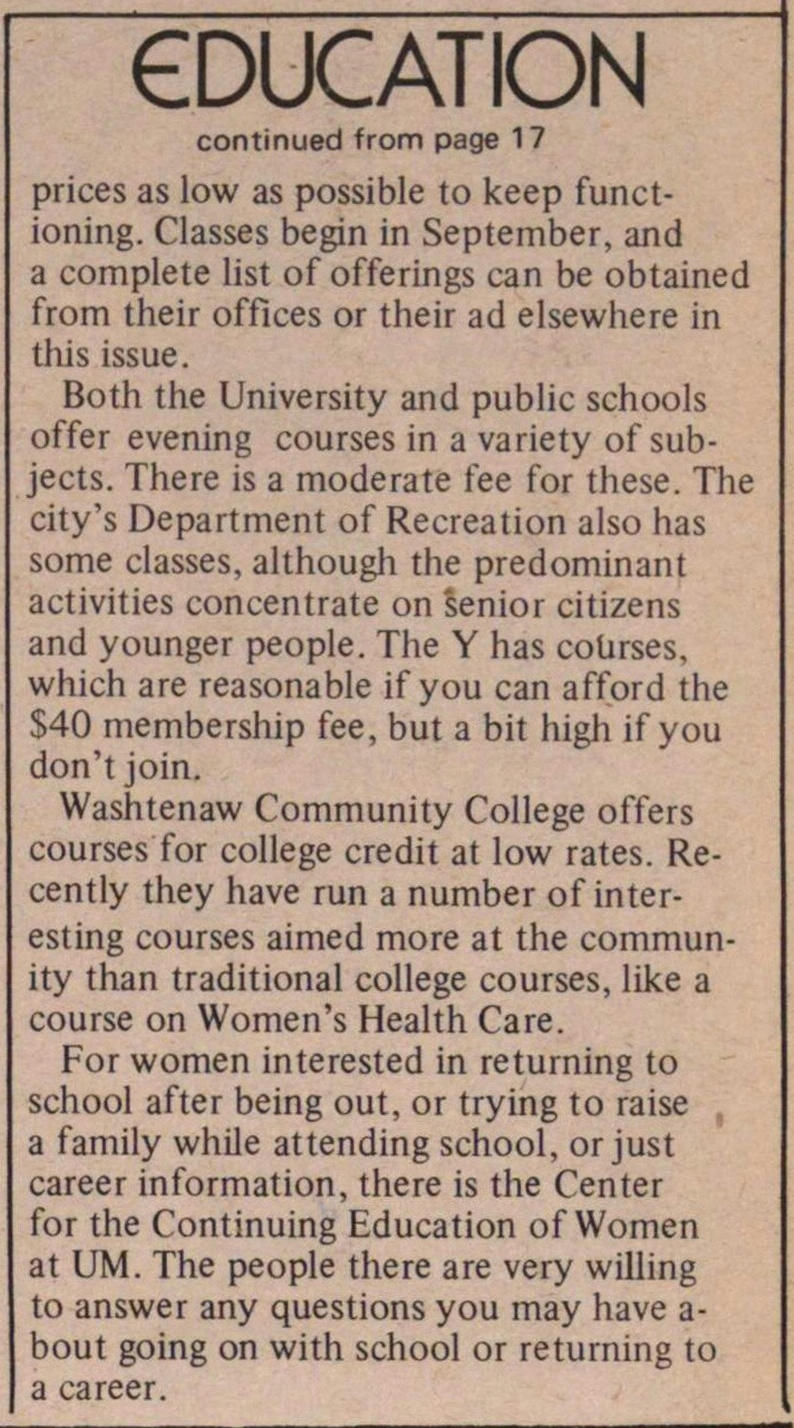 In April, 1973. Democrats and Human Rights Party Council members broke up $600,000 in federal revenue-sharing money between various social services. The largest share of the funds was channeled into child care centers, with fourteen receiving amounts up to $10,000.

This year, between city budget problems and a Republican-dominated Council opposed to city money for social services, child care funding was reduced to nothing. Although the centers have so far continued in operation, how long they will be able to continue to provide low cost child care is uncertain.

The need for organized child care has been a major issue since the early seventies, when women students and employees at the University of Michigan pressed the administration for child care facilities. When UM president Robben Fleming was presented with the demands, he told the women that if women chose to have families, they would have to accept the responsibility for them; it wasn't the University's problem.

After months of picketing. speaking at Regents meetings and conferences with U  administrators, the U women were finally given a small space at the Student Activities Building for child care, but were told no money could be taken from the millions in the UM budget for their center. The small room was the initial home of the Child Care Action Center. Since then, the Center has been shuffled a number of times around the University, indicating the administration's continuing callousness towards women with children. Located now in the School of Education building, the Center has managed to keep providing child care for the children of University people despite recurring financial problems. The Center combines paid staff with volunteer student help from Project Community.

Another Center with a long history is the Children's Community Center, which got its start in 1967 with a staff including Skip Taube and Diana Oughton. Diana later died in the Weather Underground house explosion. The Center disbanded before her death, and then revived at the 1972 Blues and Jazz Festival. By the end of the concert, the people working with child care decided that a more permanent program was needed, and started the CCC. They set up their program in a basement, and worked around the philosophy of creating not only an alternative institution, but teaching the young people alternative lifestyles, from organic gardening and natural foods, to communal decision-making.

After receiving money from the revenue sharing funds last year, the CCC purchased its current facilities on Seventh Street. Besides the traditional day-to-day child care, the CCC has provided child care at the free concerts for the past two summers. It also has set up a reasonable Friday and Saturday "babysitting" service. One of the more exciting events was the New Year's Eve babysitting last December while the parents were out celebrating, the young people had their own party at the CCC.

Corntree combines child care with communal living, with many of the participants living in the center. There is a strong emphasis on parental involvement and collective decision-making.

Most of the other child care centers range a bit more towards the traditional, although often with a pre-dominately young staff. Located in neighborhood centers, churches and/or houses, all are working at providing low-cost child care and creating a pleasant environment for young people.

Two other organizations connected indirectly with child-care are the Women's Crisis Center and Project Community. The Crisis Center is a good source for information on child care, with lists of local centers.

Project Community, a program at the University, works to get students involved in community based projects. Among the areas students can work in (and sometimes even get credit for) are child care, mental health facilities, prisons and youth homes. Students who are interested in working in childcare centers can contact them.

Youth Liberation, which on and off has done organizing in the public schools, at present primarily works on putting out a monthly newsletter, FPS, dealing with young people all over the country and in A2. They also have several pamphlets on the rights of young people, and have worked to gain rights for young people like the right to live where they choose. and an end to compulsory education.

Ozone House is more of a counseling oriented institution, with a young staff which also stresses young people's rights. They are helpful both for young people trying to work out problems with their families, and also for those who have decided they can no longer live at home. They are able to help people find temporary housing. and are trying to get together another free lunch program for people without money.

A number of institutions offer various courses - some are even free, and most are inexpensive. You can pursue more intellectual paths, or take arts and crafts courses just for fun.

The most obvious educational places are the University of Michigan, Eastern Michigan University and the public schools. While these places give A2 and Ypsi their reputations for being educational centers, there are less traditional programs which have gotten less attention.

Free classes in arts and crafts are available through the Creative Arts Workshop, part of the Community Center Project. Located in the building with other C4 groups like Ozone House and Community Switchboard, the Workshop provides a place for artists to get together. Classes will probably be beginning late September or early October.

One of the most comprehensive programs around is Art Worlds, a non-profit group which offers courses in everything from photography and silk-screening, to belly dancing and mime. They try to keep their

prices as low as possible to keep functioning. Classes begin in September, and a complete list of offerings can be obtained from their offices or their ad elsewhere in this issue.

Both the University and public schools offer evening courses in a variety of subjects. There is a moderate fee for these. The city's Department of Recreation also has some classes, although the predominant activities concentrate on senior citizens and younger people. The Y has courses, which are reasonable if you can afford the $40 membership fee, but a bit high if you don't join.

Washtenaw Community College offers courses for college credit at low rates. Recently they have run a number of interesting courses aimed more at the community than traditional college courses, like a course on Women's Health Care.

For women interested in returning to school after being out, or trying to raise a family while attending school, or just career information, there is the Center for the Continuing Education of Women at UM. The people there are very willing to answer any questions you may have about going on with school or returning to a career.