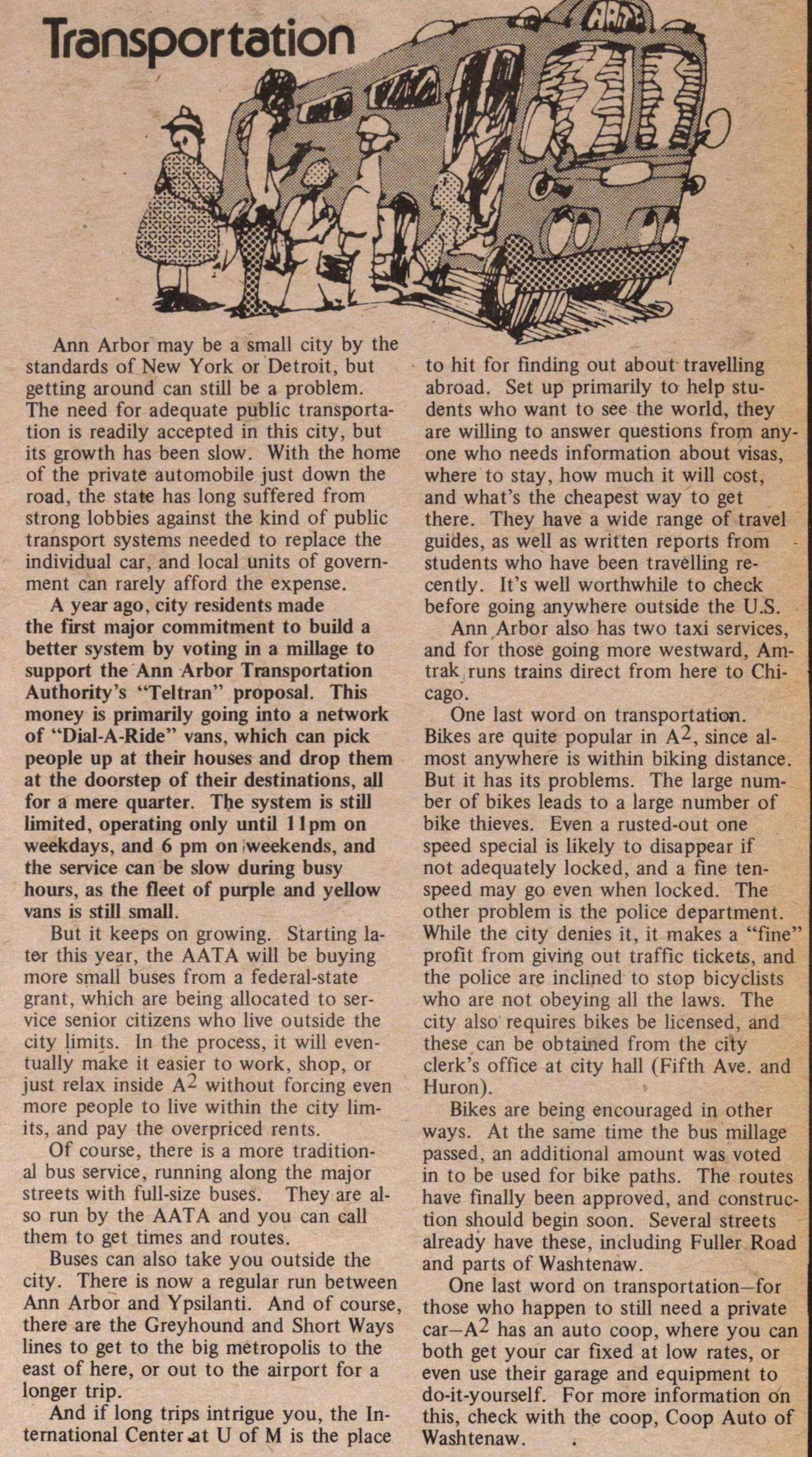 Ann Arbor may be a small city by the standards of New York or Detroit, but getting around can still be a problem. The need for adequate public transportation is readily accepted in this city, but its growth has been slow. With the home of the private automobile just down the road, the state has long suffered from strong lobbies against the kind of public transport systems needed to replace the individual car, and local units of government can rarely afford the expense.

A year ago, city residents made the first major commitment to build a better system by voting in a millage to support the Ann Arbor Transportation Authority's "Teltran" proposal. This money is primarily going into a network of "Dial-A-Ride" vans, which can pick people up at their houses and drop them at the doorstep of their destinations, all for a mere quarter. The system is still limited, operating only until 11 pm on weekdays, and 6 pm on weekends, and the service can be slow during busy hours, as the fleet of purple and yellow vans is still small.

But it keeps on growing. Starting later this year, the AATA will be buying more small buses from a federal-state grant, which are being allocated to service senior citizens who live outside the city limits. In the process, it will eventually make it easier to work, shop, or just relax inside A2 without forcing even more people to live within the city limits, and pay the overpriced rents.

Of course, there is a more traditional bus service, running along the major streets with full-size buses. They are also run by the AATA and you can call them to get times and routes.

Buses can also take you outside the city. There is now a regular run between Ann Arbor and Ypsilanti. And of course, there are the Greyhound and Short Ways lines to get to the big metropolis to the east of here, or out to the airport for a longer trip.

And if long trips intrigue you, the International Center at U of M is the place to hit for finding out about travelling abroad. Set up primarily to help students who want to see the world, they are willing to answer questions from anyone who needs information about visas, where to stay, how much it will cost, and what's the cheapest way to get there. They have a wide range of travel guides, as well as written reports from students who have been travelling recently. It's well worthwhile to check before going anywhere outside the U.S.

One last word on transportation. Bikes are quite popular in A2, since almost anywhere is within biking distance. But it has its problems. The large number of bikes leads to a large number of bike thieves. Even a rusted-out one speed special is likely to disappear if not adequately locked, and a fine ten speed may go even when locked. The other problem is the police department. While the city denies it, it makes a "fine" profit from giving out traffic tickets, and the police are inclined to stop bicyclists who are not obeying all the laws. The city also requires bikes be licensed, and these can be obtained from the city clerk's office at city hall (Fifth Ave. and Huron).

Bikes are being encouraged in other ways. At the same time the bus millage passed, an additional amount was voted in to be used for bike paths. The routes have finally been approved, and construction should begin soon. Several streets already have these, including Fuller Road and parts of Washtenaw.

One last word on transportation- for those who happen to still need a private car- A2 has an auto coop, where you can both get your car fixed at low rates, or even use their garage and equipment to do-it-yourself. For more information on this, check with the coop, Coop Auto of Washtenaw.