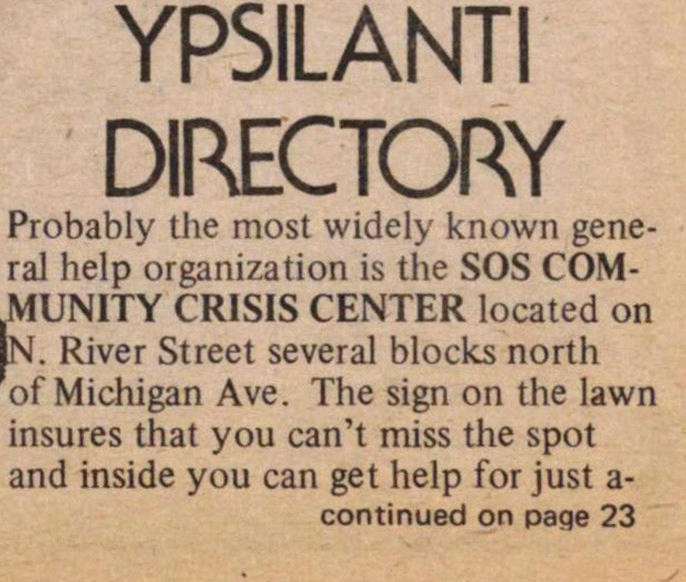 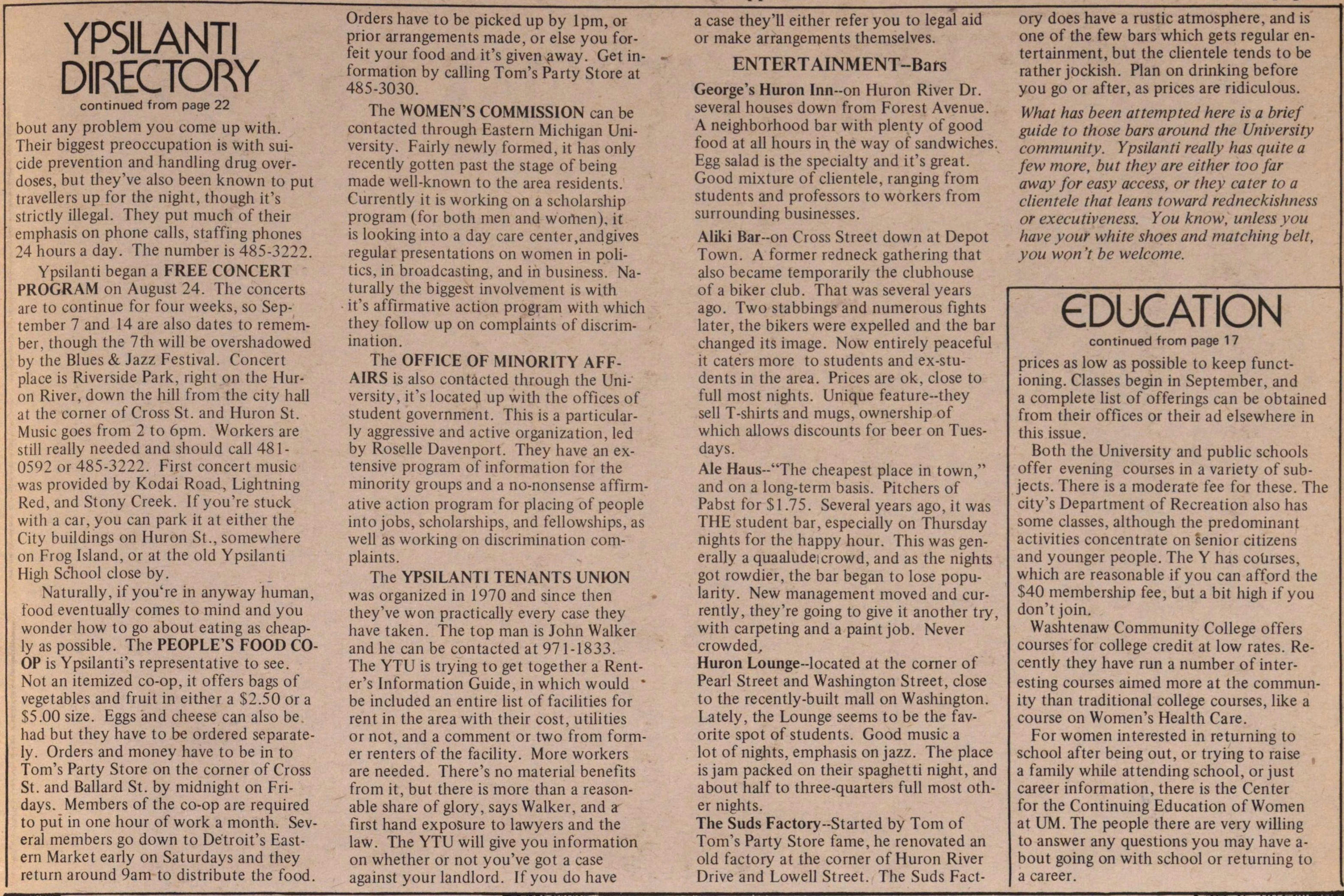 Probably the most widely known general help organization is the SOS COMMUNITY CRISIS CENTER located on N. River Street several blocks north of Michigan Ave. The sign on the lawn insures that you can't miss the spot and inside you can get help for just a

bout any problem you come up with. Their biggest preoccupation is with suicide prevention and handling drug overdoses, but üiey've also been known to put travelers up for the night, though it's strictly illegal. They put much of their emphasis on phone calls, staffing phones 24 hours a day. The number is 485-3222.

Ypsilanti began a FREE CONCERT PROGRAM on August 24. The concerts are to continue for four weeks, so September 7 and 14 are also dates to remember, though the 7th will be overshadowed by the Blues & Jazz Festival. Concert place is Riverside Park. right on the Huron River, down the hill from the city hall at the corner of Cross St. and Huron St. Music goes from 2 to 6pm. Workers are still really needed and should call 481-0592 or 485-3222. First concert music was provided by Kodai Road, Lightning Red, and Stony Creek. If you're stuck with a car, you can park it at either the City buildings on Huron St., somewhere on Frog Island, or at the old Ypsilanti High School close by.

Naturally, if you're in anyway human, food eventually comes to mind and you wonder how to go about eating as cheaply as possible. The PEOPLE'S FOOD COOP is Ypsilanti's representative to see. Not an itemized co-op, it offers bags of vegetables and fruit in either a S2.50 or a $5.00 size. Eggs and cheese can also be had but they have to be ordered separately. Orders and money have to be in to Tom's Party Store on the corner of Cross St. and Ballard St. by midnight on Fridays. Members of the co-op are required to put in one hour of work a month. Several members go down to Detroit's Eastern Market early on Saturdays and they return around 9am to distribute the food. Orders have to be picked up by 1 pm, or prior arrangements made, or else you forfeit your food and it's given #way. Get information by calling Tom's Party Store at 485-3030.

The WOMEN'S COMMISSION can be contacted through Eastern Michigan University. Fairly newly formed, it has only recently gotten past the stage of being made well-known to the area residents. Currently it is working on a scholarship program (for both men and women), it is looking into a day care center. and gives regular presentations on women in politics, in broadcasting, and in business. Naturally the biggest involvement is with it's affirmative action program with which they follow up on complaints of discrimination.

The OFFICE OF MINORITY AFFAIRS is also contacted through the University, it's located up with the offices of student government. This is a particularly aggressive and active organization, led by Roselle Davenport. They have an extensive program of information for the minority groups and a no-nonsense affirmative action program for placing of people into jobs, scholarships, and fellowships, as well as working on discrimination complaints.

The YPSILANTI TENANTS UNION was organized in 1970 and since then they've won practically every case they have taken. The top man is John Walker and he can be contacted at 971-1833. The YTU is trying to get together a Renter's Information Guide, in which would be included an entire list of facilities for rent in the area with their cost, utilities or not, and a comment or two from former renters of the facility. More workers are needed. There's no material benefits from it, but there is more than a reasonable share of glory, says Walker, and a first hand exposure to lawyers and the law. The YTU will give you information on whether or not you've got a case against your landlord. If you do have a case they'll either refer you to legal aid or make arrangements themselves.

George's Huron Inn--on Huron River Dr. several houses down from Forest Avenue. A neighborhood bar with plenty of good food at all hours in, the way of sandwiches. Egg salad is the specialty and it's great. Good mixture of clientele, ranging from students and professors to workers from surrounding businesses.

Aliki Bar--on Cross Street down at Depot Town. A former redneck gathering that also became temporarily the clubhouse of a biker club. That was several years ago. Two stabbings and numerous fights later, the bikers were expelled and the bar changed its image. Now entirely peaceful it caters more to students and ex-students in the area. Prices are ok, close to full most nights. Unique feature-they sell T-shirts and mugs, ownership of which allows discounts for beer on Tuesdays.

Ale Haus--"The cheapest place in town," and on a long-term basis. Pitchers of Pabst for $1 .75. Several years ago, it was THE student bar, especially on Thursday nights for the happy hour. This was generally a quaalude crowd, and as the nights got rowdier, the bar began to lose popularity. New management moved and currently, they're going to give it another try, with carpeting and a paint job. Never crowded,

Huron Lounge-located at the corner of Pearl Street and Washington Street, close to the recently-built mail on Washington. Lately, the Lounge seems to be the favorite spot of students. Good music a lot of nights, emphasis on jazz. The place is jam packed on their spaghetti night, and about half to three-quarters full most other nights.

The Suds Factory-Started by Tom of Tom's Party Store fame, he renovated an old factory at the corner of Huron River Drive and Lowell Street. The Suds factory does have a rustic atmosphere, and is one of the few bars which gets regular entertainment, but the clientele tends to be rather jockish. Plan on drinking before you go or after, as prices are ridiculous.

What has been attempted here is a brief guide to those bars around the University community. Ypsilanti really has quite a few more, but they are either too far away for easy access, or they cater to a clientele that leans toward redneckishness or executiveness. You know, unless you have your white shoes and matching belt, you won't be welcome.