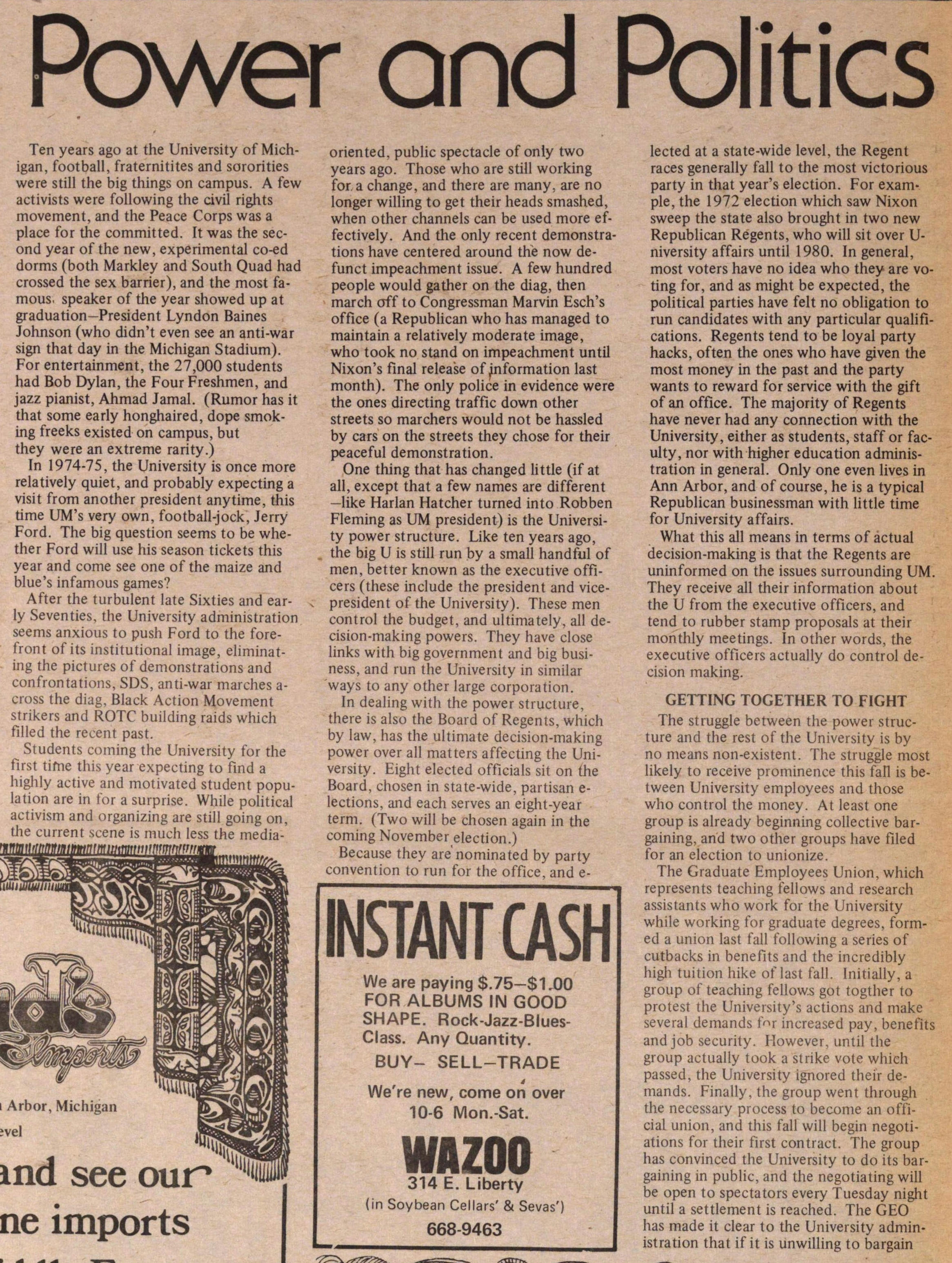 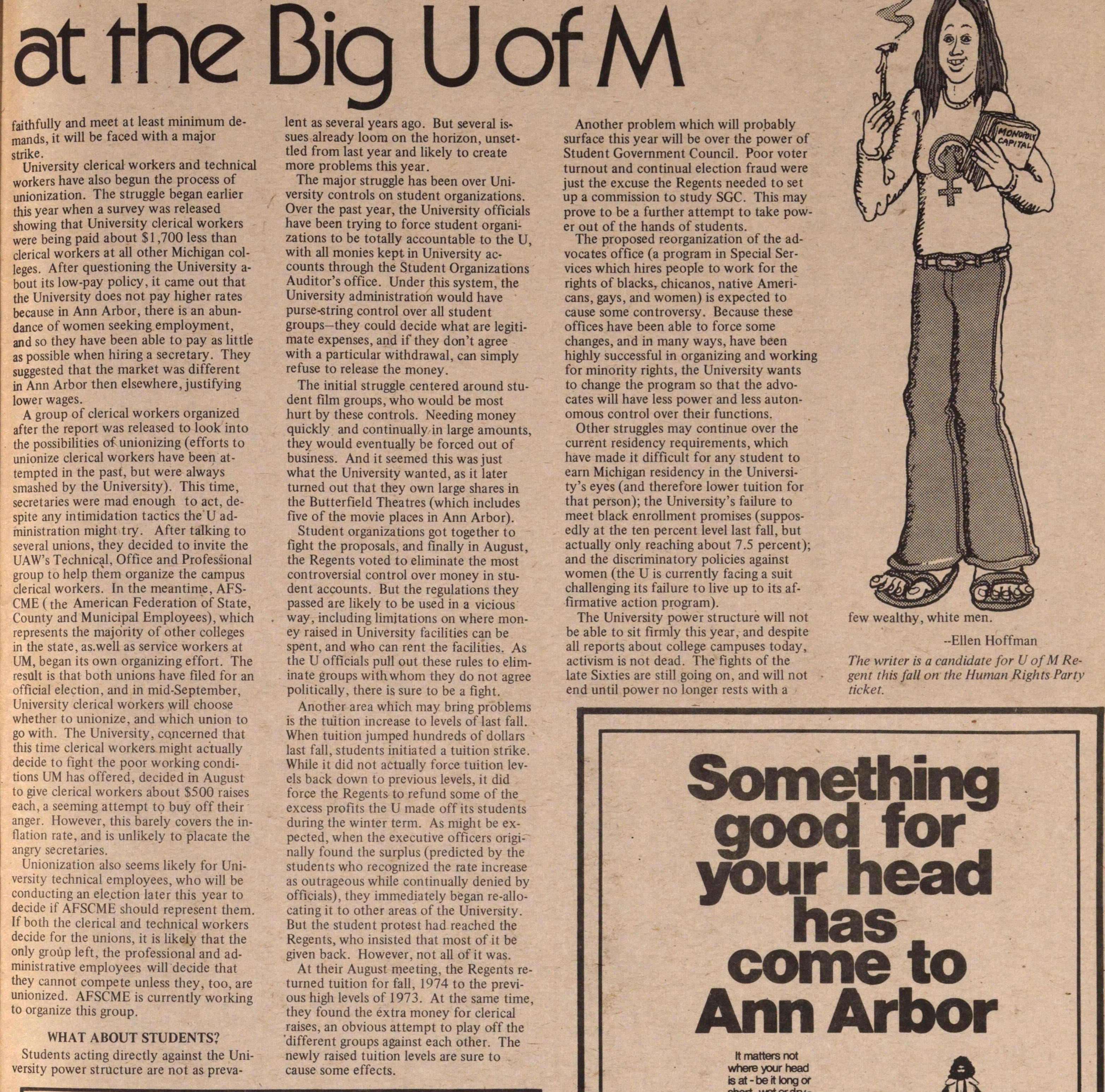 Ten years ago at the University of Michigan, football, fraternities and sororities were still the big things on campus. A few activists were following the civil rights movement, and the Peace Corps was a place for the committed. It was the second year of the new, experimental co-ed dorms (both Markley and South Quad had crossed the sex barrier), and the most famous. speaker of the year showed up at graduation-President Lyndon Baines Johnson (who didn't even see an anti-war sign that day in the Michigan Stadium). For entertainment, the 27,000 students had Bob Dylan, the Four Freshmen, and jazz pianist, Ahmad Jamal. (Rumor has it that some early longhaired, dope smoking freaks existed on campus, but they were an extreme rarity.)

In 1974-75, the University is once more relatively quiet, and probably expecting a visit from another president anytime, this time UM's very own, football-jock, Jerry Ford. The big question seems to be whether Ford will use his season tickets this year and come see one of the maize and blue's infamous games?

After the turbulent late Sixties and early Seventies, the University administration seems anxious to push Ford to the forefront of its institutional image, eliminating the pictures of demonstrations and confrontations, SDS, antiwar marches across the diag. Black Action Movement strikers and ROTC building raids which filled the recent past.

Students coming to the University for the first time this year expecting to find a highly active and motivated student population are in for a surprise. While politico! activism and organizing are still going on, the current scène is much less the media oriented, public spectacle of only two years ago. Those who are still working for a change, and there are many. are no longer willing to get their heads smashed, when other channels can be used more effectively. And the only recent demonstrations have centered around the now defunct impeachment issue. A few hundred people would gather on the diag, then march off to Congressman Marvin Esch's office (a Republican who has managed to maintain a relatively moderate image, who took no stand on impeachment until Nixon's final release of information last month). The only police in evidence were the ones directing traffic down other streets so marchers would not be hassled by cars on the streets they chose for their peaceful demonstration.

One thing that has changed little (if at all, except that a few names are different - like Harían Hatcher turned into Robben Fleming as UM president) is the University power structure. Like ten years ago, . the big U is still run by a small handful of men, better known as the executive officers (these include the president and vice; president of the University). These men control the budget, and ultimately, all decision-making powers. They have close links with big government and big business, and run the University in similar ways to any other large Corporation.

In dealing with the power structure, there is also the Board of Regents, which by law, has the ultimate decision-making power over all matters affecting the University. Eight elected officials sit on the Board, chosen in state-wide, partisan elections, and each serves an eight-year term. (Two will be chosen again in the coming November election.)

Because they are nominated by party convention to run for the office, and elected at a state-wide level, the Regent races generally fall to the most victorious party in that year's election. For example, the 1972 election which saw Nixon sweep the state also brought in two new Republican Regents, who will sit over University affairs until 1980. In general, most voters have no idea who they are voting for, and as might be expected, the political parties have felt no obligation to run candidates with any particular qualifications. Regents tend to be loyal party hacks, often the ones who have given the most money in the past and the party wants to reward for service with the gift of an office. The majority of Regents have never had any connection with the University, either as students, staff or faculty, nor with higher education administration in general. Only one even lives in Ann Arbor, and of course, he is a typical Republican businessman with little time for University affairs. What this all means in terms of actual decision-making is that the Regents are uninformed on the issues surrounding UM. They receive all their information about the U from the executive officers, and tend to rubber stamp proposals at their monthly meetings. In other words, the executive officers actually do control decision making.

The struggle between the power structure and the rest of the University is by no means non-existent. The struggle most likely to receive prominence this fall is between University employees and those who control the money. At least one group is already beginning collective bargaining, and two other groups have filed for an election to unionize.

The Graduate Employees Union, which represents teaching fellows and research assistants who work for the University while working for graduate degrees, formed a union last fall following a series of cutbacks in benefits and the incredibly high tuition hike of last fall. Initially, a group of teaching fellows got together to protest the University's actions and make several demands for increased pay, benefits and job security. However, until the group actually took a strike vote which passed, the University ignored their demands. Finally, the group went through the necessary process to become an official union, and this fall will begin negotiations for their first contract. The group has convinced the University to do its bargaining in public, and the negotiating will be open to spectators every Tuesday night until a settlement is reached. The GEO has made it clear to the University administration that if it is unwilling to bargain faithfully and meet at least minimum demands, it will be faced with a major strike.

A group of clerical workers organized after the report was released to look into the possibilities of unionizing (efforts to unionize clerical workers have been attempted in the past, but were always smashed by the University). This time, secretaries were mad enough to act, despite any intimidation tactics the UM administration might try. After talking to several unions, they decided to invite the UAW's Technical, Office and Professional group to help them organize the campus clerical workers. In the meantime, AFSCME ( the American Federation of State, County and Municipal Employees), which represents the majority of other colleges in the state, as.well as service workers at UM, began its own organizing effort. The result is that both unions have filed for an official election, and in mid-September, University clerical workers will choose whether to unionize, and which union to go with. The University, concerned that this time clerical workers might actually decide to fight the poor working conditions UM has offered, decided in August to give clerical workers about $500 raises each, a seeming attempt to buy off their anger. However, this barely covers the inflation rate, and is unlikely to placate the angry secretaries.

Unionization also seems likely for University technical employees, who will be conducting an election later this year to decide if AFSCME should represent them. If both the clerical and technical workers decide for the unions, it is likely that the only group left, the professional and administrative employees will decide that they cannot compete unless they, too, are unionized. AFSCME is currently working to organize this group.

Students acting directly against the University power structure are not as prevalent as several years ago. But several issues already loom on the horizon, unsettled from last year and likely to create more problems this year.

The major struggle has been over University controls on student organizations. Over the past year, the University officials have been trying to force student organizations to be totally accountable to the U, with all monies kept in University accounts through the Student Organizations Auditor's office. Under this system, the University administration would have purse-string control over all student groups-they could decide what are legitimate expenses, and if they don't agree with a particular withdrawal, can simply refuse to release the money.

The initial struggle centered around student film groups, who would be most hurt by these controls. Needing money quickly and continually in large amounts, they would eventually be forced out of business. And it seemed this was just what the University wanted, as it later turned out that they own large shares in the Butterfield Theatres (which includes five of the movie places in Ann Arbor).

Student organizations got together to fight the proposals, and finally in August, the Regents voted to eliminate the most controversial control over money in student accounts. But the regulations they passed are likely to be used in a vicious way, including limitations on where money raised in University facilities can be spent, and who can rent the facilities. As the U officials pull out these rules to eliminate groups with whom they do not agree politically, there is sure to be a fight.

Another area which may bring problems is the tuition increase to levels of last fall. When tuition jumped hundreds of dollars last fall, students initiated a tuition strike. While it did not actually force tuition levels back down to previous levels, it did force the Regents to refund some of the excess profits the U made off its students during the winter term. As might be expected, when the executive officers originally found the surplus (predicted by the students who recognized the rate increase as outrageous while continually denied by officials), they immediately began re-allocating it to other areas of the University. But the student protest had reached the Regents, who insisted that most of it be given back. However, not all of it was.

At their August meeting, the Regents returned tuition for fall, 1974 to the previous high levéis of 1973. At the same time, they found the extra money for clerical raises, an obvious attempt to play off the 'different groups against each other. The newly raised tuition levels are sure to cause some effects.

Another problem which will probably surface this year will be over the power of Student Government Council. Poor voter turnout and continual election fraud were just the excuse the Regents needed to set up a commission to study SGC. This may prove to be a further attempt to take power out of the hands of students.

The proposed reorganization of the advocates office (a program in Special Services which hires people to work for the rights of blacks, chicanos, native Americans, gays, and women) is expected to cause some controversy. Because these offices have been able to force some changes, and in many ways, have been highly successful in organizing and working for minority rights, the University wants to change the program so that the advocates will have less power and less autonomous control over their functions.

Other struggles may continue over the current residency requirements, which have made it difficult for any student to earn Michigan residency in the University's eyes (and therefore lower tuition for that person); the University's failure to meet black enrollment promises (supposedly at the ten percent level last f all, but actually only reaching about 7.5 percent); and the discriminatory policies against women (the U is currently facing a suit challenging its failure to live up to its affirmative action program).

The University power structure will not be able to sit firmly this year, and despite all reports about college campuses today, activism is not dead. The fights of the late Sixties are still going on, and will not - end until power no longer rests with a few wealthy, white men.

The writer is a candidate for U of M Regent this fall on the Human Rights Party ticket.