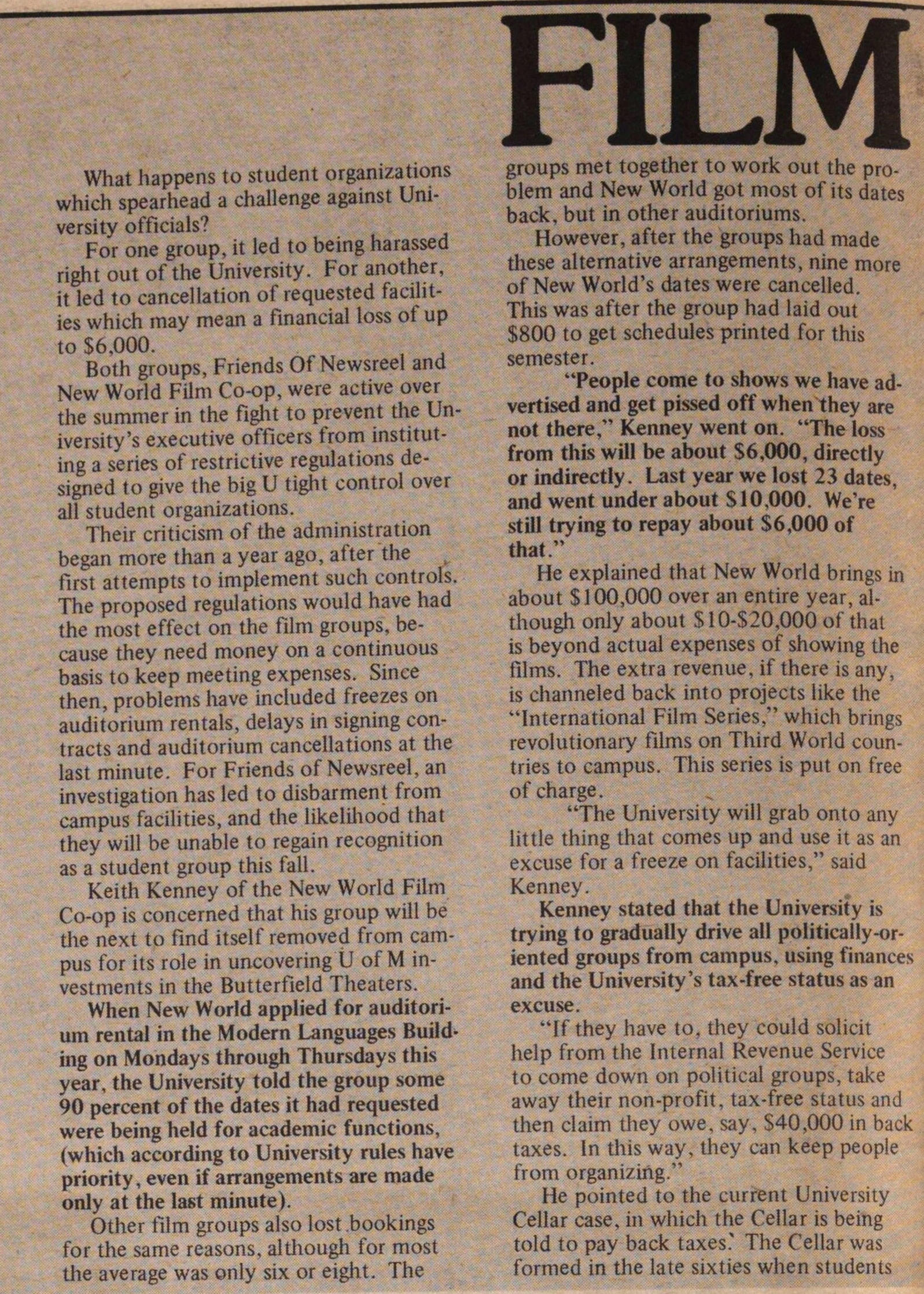 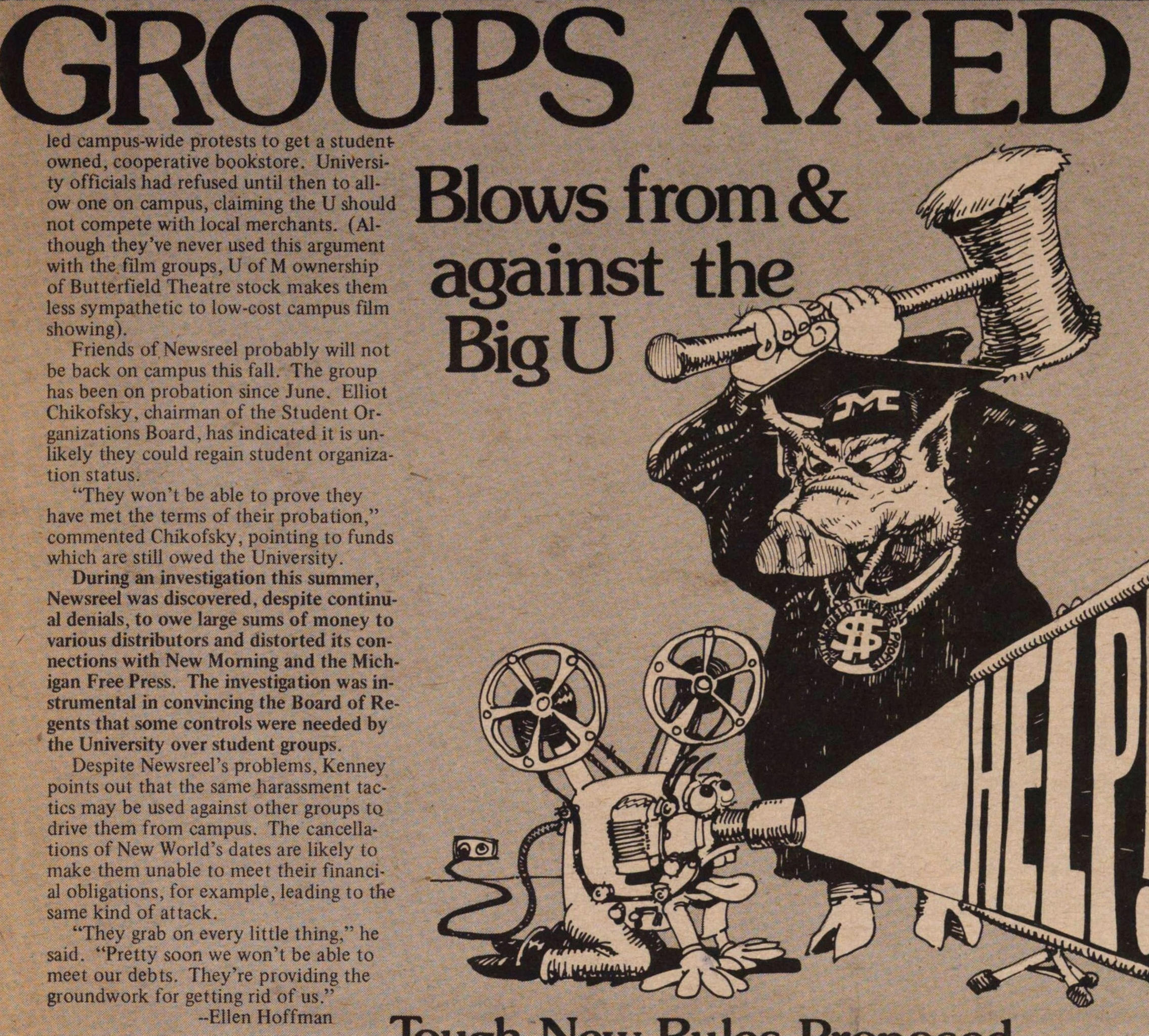 What happens to student organiza tions which spearhead a challenge against üniversity officials? For one group, it led to being harassed right out of the University. For another, it led to cancellation of requested facilities which may mean a financial loss of up to $6,000. Both groups, Friends Of Newsreei and New World Film Co-op, were active over the summer in the fïght to prevent the University's executive officers from instituting a series of restrictive regulations designed to give the big U tight control over all student organizations. Their criticism of the administration began more than a year ago, after the first attempts to implement such controls. The proposed regulations would have had the most effect on the film groups, because they need money on a continuous basis to keep meeting expenses. Since then, problems have included freezes on auditorium rentáis, delays in signing contracts and auditorium cancellations at the last minute. For Friends of Newsreei, an investigation has led to disbarment from campus facilities, and the likelihood that they will be unable to regain recognition as a student group this fall. Keith Kenney of the New World Film Co-op is concerned that his group will be the next to find itself removed from campus for its role in uncovering LJ of M investments in the Butterfield Theaters. When New World applied for auditorium rental in the Modern Languages Building on Mondays through Thursdays this year, the University told the group some 90 percent of the dates it had requested were being held for academie functions, (which according to University niles have priority , even if arrangements are made only at the last minute). Other film groups also lost bookings for the same reasons, although for most the average was only six or eight. The groups met together to work out the problem and New World got most of its dates back, but in other auditoriums. However, after the groups had made these alternative arrangements, nine more of New World's dates were cancelled. This was after the group had laid out $800 to get schedules printed for this semester. "People come to shows we have advertised and get pissed off when they are not there," Kenney went on. "The loss from this will be about $6,000, directly or indirectly. Last year we lost 23 dates, and went under about $10,000. We're still trying to repay about $6,000 of that." He explained that New World brings in about $100,000 over an entire year, although only about $10-$20,000 of that is beyond actual expenses of showing the films. The extra revenue, if there is any, is channeled back into projects like the 'international Film Series," which brings revolutionary films on Third World countries to campus. This series is put on free of charge. "The University will grab onto any little thing that comes up and use it as an excuse for a freeze on facüities," said Kenney. Kenney stated that the University is trying to gradually drive all politically-oriented groups from campus, using finances and the University's tax-free status as an excuse. 'if they have to, they could solicit help from the Internal Revenue Service to come down on politica! groups, take away their non-profit, tax-free status and then claim they owe, say, S40,000 in back taxes. In this way, they can keep people from organiziftg." He pointed to the current University Cellar case, in which the Cellar is being told to pay back taxes." The Cellar was formed in the late sixties when students lea campus-wiae protests to get a stuaentowned, cooperative bookstore. _ ty officials had refused until then to allow one on campus, claiming the U should not compete with local merchants. (Although they've never used this argument with the film groups, U of M ownership of Butterfield Theatre stock makes them less sympathetic to low-cost campus film showing). Friends of Newsreel probably will not be back on campus this fall. The group has been on probation since June. Elliot Chikofsky, chairman of the Student Organizations Board, has indicated it is unlikely they could regain student organization status. "They won't be able to prove they have met the terms of their probation," commented Chikofsky, pointing to funds which are still owed the University. During art investigation this summer, Newsreel was discovered, despite continual denials, to owe large sums of money to various distributors and distorted its connections with New Morning and the Michigan Free Press. The investigation was instrumental in convincing the Board of Regents that some controls were needed by the University over student groups. Despite Newsreel's problems, Kenney points out that the same harassment tactics may be used against other groups to_ drive them f rom campus. The cancellations of New World's dates are likely to make them unable to meet their financial obligations, for example, leading to the same kind of attack. "They grab on every little thing," he said. "Pretty soon we won't be able to meet our debts. They're providing the eroundwork for gettine rid of us."