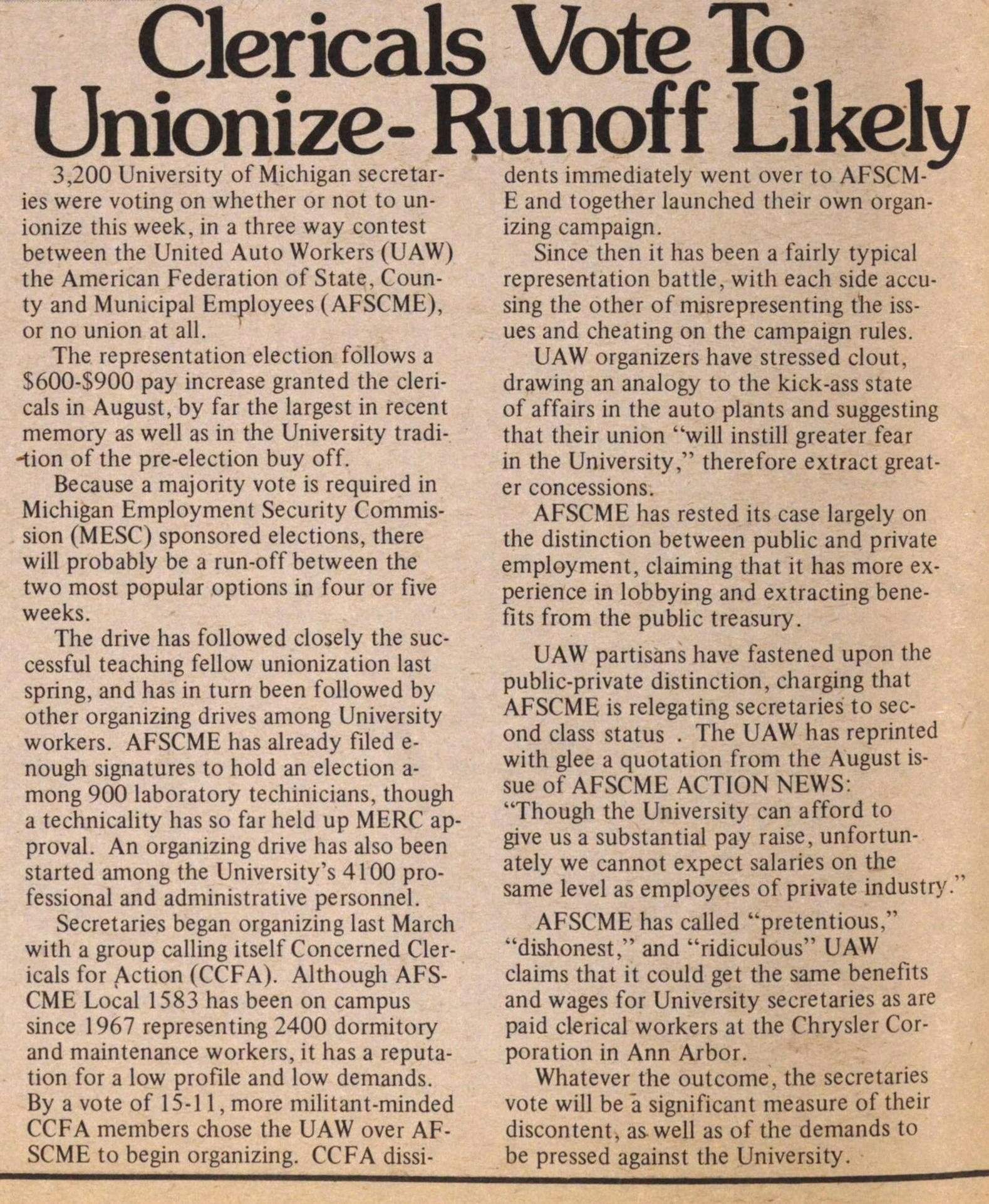 3,200 University of Michigan secretaries were voting on whether or not to unionize this week, in a three way contest between the United Auto Workers (UAW), the American Federation of State, County and Municipal Employees (AFSCME), or no union at all.

The representation election follows a $600 - $900 pay increase granted the clericals in August, by far the largest in recent memory as well as in the University tradition of the pre-election buy off.

Because a majority vote is required in Michigan Employment Security Commission (MESC) sponsored elections, there will probably be a run-off between the two most popular options in four or five weeks.

The drive has followed closely the successful teaching fellow unionization last spring, and has in turn been followed by other organizing drives among University workers. AFSCME has already filed enough signatures to hold an election among 900 laboratory technicians, though a technicality has so far held up MESC approval. An organizing drive has also been started among the University's 4100 professional and administrative personnel.

Secretaries began organizing last March with a group calling itself Concerned Clericals for Action (CCFA). Although AFSCME Local 1583 has been on campus since 1967 representing 2400 dormitory and maintenance workers, it has a reputation for a low profile and low demands. By a vote of 15-11, more militant-minded CCFA members chose the UAS over AFSCME to begin organizing. CCFA dissidents immediately went over to AFSCME and together launched their own organizing campaign.

since then it has been a fairly typical representation battle, with each side accusing the other of misrepresenting the issues and cheating on the campaign rules.

UAS organizers have stressed clout, drawing an analogy to the kick-ass state of affairs in the auto plants and suggesting that their union "will instill greater fear in the University," therefore extract greater concessions.

AFSCME has rested its case largely on the distinction between public and private employment, claiming that it has more experience lobbying and extracting benefits from the public treasury.

UAW partisans have fastened upon the public-private distinction, charging that AFSCME is relegating secretaries to second class status. The UAW has reprinted with glee a quotation from the August issue of AFSCME ACTION NEWS: "Though the University can afford to give us a substantial pay raise, unfortunately we cannot expect salaries on the same level as employees of private industry."

AFSCME has called "pretentious," "dishonest," and "ridiculous" UAW claims it that it could get the same benefits and wages for University secretaries as are paid clerical workers at the Chrysler Corporation in Ann Arbor.

Whatever the outcome, the secretaries vote will be a significant measure of their discontent, as well as of the demands to be pressed against the University.