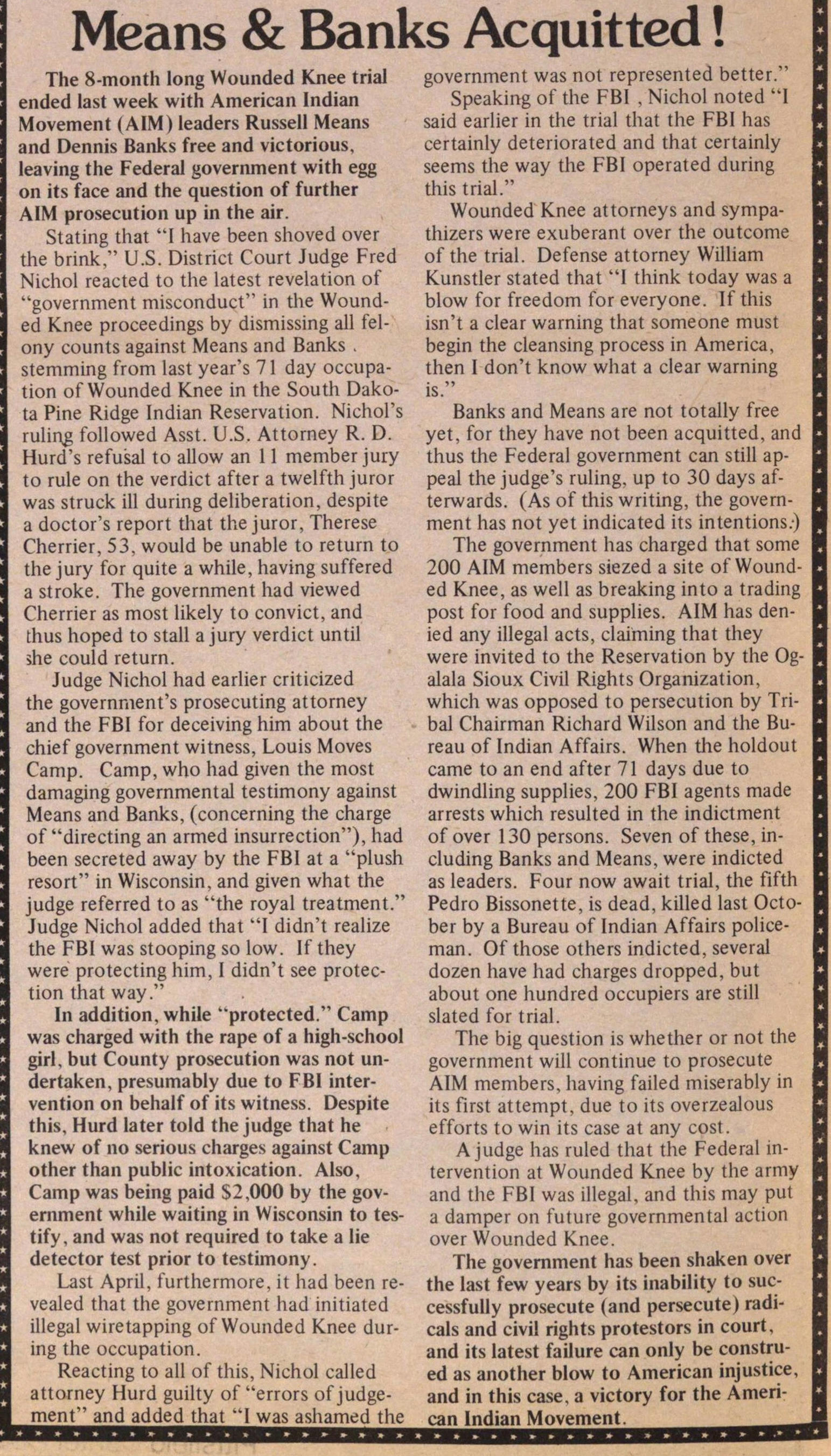 The 8-month long Wounded Knee trial ended last week with American Indian Movement (AIM) leaders Russell Means and Dennis Banks free and victorious, leaving the Federal government with egg on its face and the question of further AIM prosecution up in the air.

Stating that "I have been shoved over I the brink," U.S. District Court Judge Fred Nichol reacted to the latest revelation of "government misconduct" in the Wounded Knee proceedings by dismissing all felony counts against Means and Banks stemming from last year's 71 day occupation of Wounded Knee in the South Dakota Pine Ridge Indian Reservation. Nichol's ruling followed Asst. U.S. Attorney R. D. Hurd's refusal to allow an 11 member jury to rule on the verdict after a twelfth juror was struck ill during deliberation, despite a doctor's report that the juror, Therese Cherrier, 53, would be unable to return to the jury for quite a while, having suffered a stroke. The government had viewed Cherrier as most likely to convict, and thus hoped to stall a jury verdict until she could return.

Judge Nichol had earlier criticized the government's prosecuting attorney and the FBI for deceiving him about the chief government witness, Louis Moves Camp. Camp, who had given the most damaging governmental testimony against Means and Banks, (concerning the charge of "directing an armed insurrection"), had been secreted away by the FBI at a "plush resort" in Wisconsin, and given what the judge referred to as "the royal treatment." Judge Nichol added that "I didn't realize the FBI was stooping so low. If they were protecting him, I didn't see protection that way."

In addition, while "protected" Camp was charged with the rape of a high-school girl, but County prosecution was not undertaken, presumably due to FBI intervention on behalf of its witness. Despite this, Hurd later told the judge that he knew of no serious charges against Camp other than public intoxication. Also, Camp was being paid $2,000 by the government while waiting in Wisconsin to testify, and was not required to take a lie detector test prior to testimony.

Last April, furthermore, it had been revealed that the government had initiated illegal wiretapping of Wounded Knee during the occupation.

Reacting to all of this, Nichol called attorney Hurd guilty of "errors of judgement" and added that "I was ashamed the government was not represented better."

Speaking of the FBI, Nichol noted "I said earlier in the trial that the FBI has certainly deteriorated and that certainly seems the way the FBI operated during this trial."

Wounded Knee attorneys and sympathizers were exuberant over the outcome of the trial. Defense attorney William Kunstler stated that "I think today was a blow for freedom for everyone. If this isn't a clear warning that someone must begin the cleansing process in America, then I don't know what a clear warning is."

Banks and Means are not totally free yet, for they have not been acquitted, and thus the Federal government can still appeal the judge's ruling, up to 30 days afterwards. (As of this writing, the government has not yet indicated its intentions.)

The government has charged that some 200 AIM members seized a site of Wounded Knee, as well as breaking into a trading post for food and supplies. AIM has denied any illegal acts, claiming that they were invited to the Reservation by the Ogalala Sioux Civil Rights Organization, which was opposed to persecution by Tribal Chairman Richard Wilson and the Bureau of Indian Affairs. When the holdout came to an end after 71 days due to dwindling supplies, 200 FBI agents made arrests which resulted in the indictment of over 130 persons. Seven of these, including Banks and Means, were indicted as leaders. Four now await trial, the fifth Pedro Bissonette, is dead, killed last October by a Bureau of Indian Affairs policeman. Of those others indicted, several dozen have had charges dropped, but about one hundred occupiers are still slated for trial.

The big question is whether or not the government will continue to prosecute AIM members, having failed miserably in its first attempt, due to its overzealous efforts to win its case at any cost.

A judge has ruled that the Federal intervention at Wounded Knee by the army and the FBI was illegal, and this may put a damper on future governmental action over Wounded Knee.

The government has been shaken over the last few years by its inability to successfully prosecute (and persecute) radicals and civil rights protestors in court, and its latest failure can only be construed as another blow to American injustice, and in this case, a victory for the American Indian Movement.