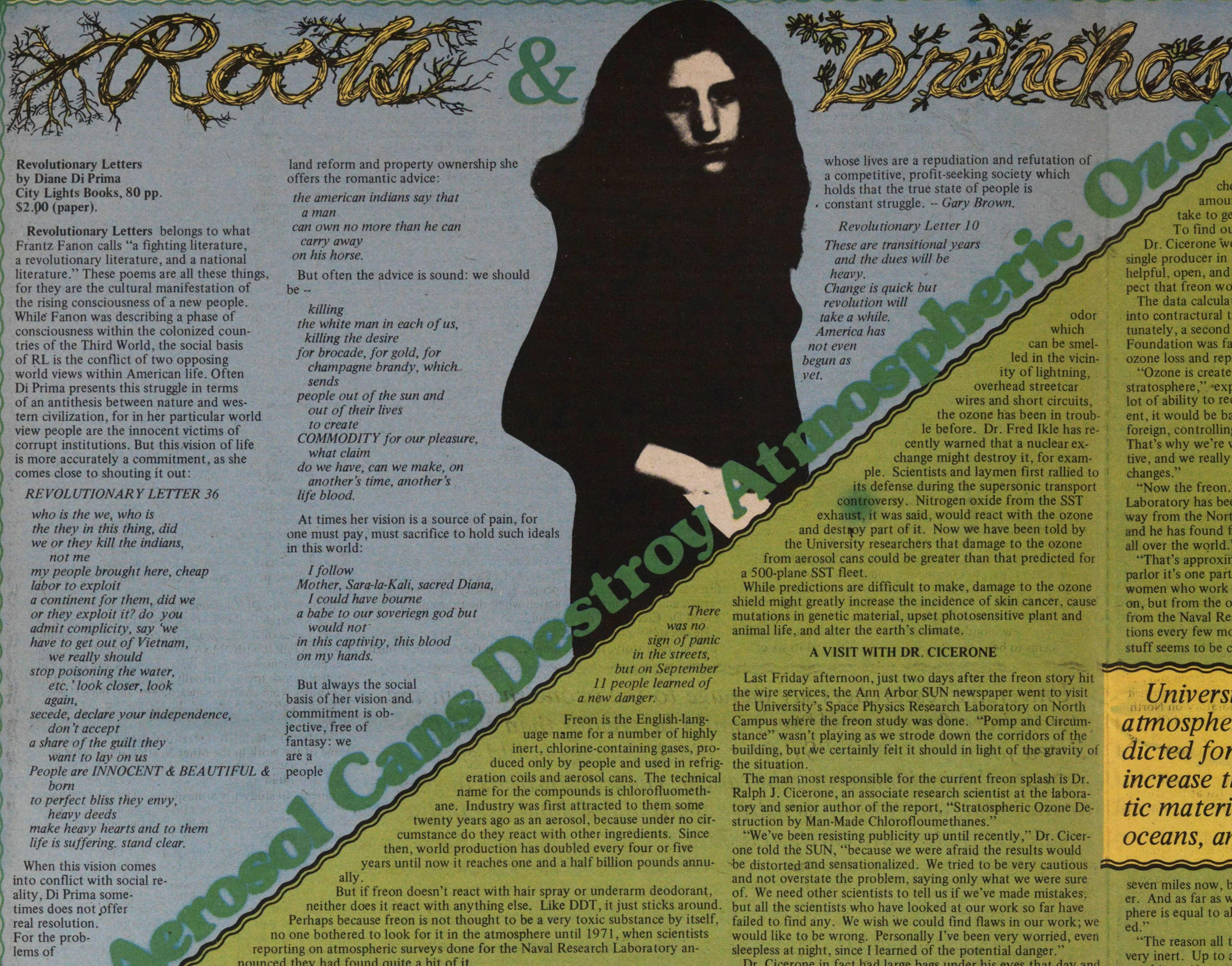 Revolutionary Letters by Diane Di Prima City Lights Books, 80 pp. $2. PO (paper). Revolutionary Letters belongs to what Frantz Fanón calis "a fighting literature, a revolutionary literature, and a national literature." These poems are all these things, for they are the cultural manifestation of the rising consciousness of a new people. While' Fanon was describing a phase of consciousness within the colonized countries of the Third World, the social basis of RL is the conflict of two opposing world views within American life. Often Di Prima presents this struggle in terms of an antithesis between nature and western civilization, for in her particular world view people are the innocent victims of corrupt institutions. But this visión of life is more accurately a commitment, as she comes close to shouting it out: REVOLUTIONAR Y LETTER 36 who is the we, who is the they in this thing, did we or they kil! the indians, not me my people brought here, cheap labor to exploit a continent for them, did we or they exploit it? do you admit complicity, say 'we have to get out of Vietnam, we really should stop poisoning the water, etc. ' look closer, look again, secede, declare your independence, don 't accept a share of the guilt they want to lay on us People are INNOCENT & BE A UTIFUL & bom to perfect bliss they envy, heavy deeds make heavy hearts and to them Ufe is sufferine stand clear When this visión comes into conflict with social realitv Pii Prima :rmp. f times does no't j real resolution. t' For the prob) lems of land reform and property ownership she offers the romantic advice: j the american indians say that aman can own no more than he can carry away on his horse. But often the advice is sound: we should be killing the white man in each ofus, killing the desire for brocade, for gold, for champagne brandy, which sends people out of the sun and out of their Uves to créate COMMODITY for our pleasure, what claim o we Aove, can we tnake, on another 's time, another 's Ufe blood. At times her visión is a source of pain, for one must pay, must sacrifïce to hold such ideáis in this world: I follow Mother, Sara-la-Kali, sacred Diana, I could have boume a babe to our soveriegn god but would not' in this captivity, this blood on my hands. But always the social basis of her visión and commitment is oi jective, free of fantasv: we are a people whose lives are a repudiation and refutation o a competitive, profit-seeking society which holds that the true state of people is i constant struggle. -- Gary Brown. Revoluüonary Letter 10 These are transitional years and the dues will be heavy. Change is quick but revoluticm wil I take a while. A menea has not even begun as vet.