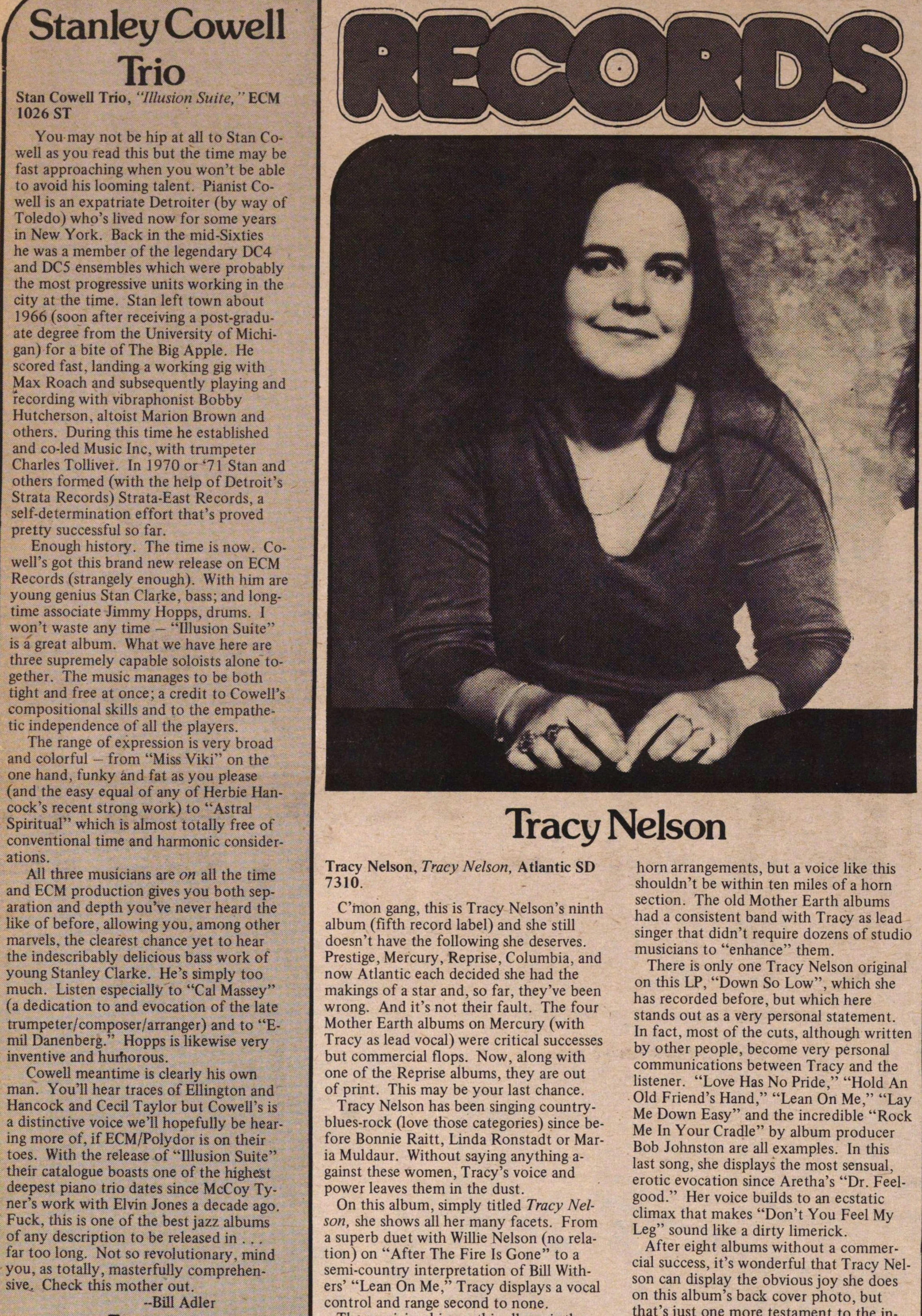 Stan Cowell Trio, "lllusion Suite, " ECM 1026 ST You may not be hip at all to Stan Cowell as you read this but the time may be fast approaching when you won't be able to avoid his looming talent. Pianist Cowell is an expatríate Detroiter (by way of Toledo) who's lived now for some years in New York. Back in the mid-Sixties he was a member of the legendary DC4 and DC5 ensembles which were probably the most progressive units working in the city at the time. Stan left town about 1966 (soon after receiving a post-graduate degree from the University of Michigan) for a bite of The Big Apple. He scored fast, landing a working gig with Max Roach and subsequently playing and recording with vibraphonist Bobby Hutcherson, altoist Marión Brown and others. During this time he established and co-led Music Inc, with trumpeter Charles Tolliver. In 1970 or '71 Stan and others formed (with the help of Detroit's Strata Records) Strata-East Records, a self-determination effort that's proved pretty successful so far. Enough history. The time is now. Cowell's got this brand new release on ECM Records (strangely enough). With him are young genius Stan Clarke, bass; and longtime associate Jimmy Hopps, drums. I won't waste any time - "lllusion Suite" is a great album. What we have here are three supremely capable soloists alone together. The music manages to be both tiglit and free at once; a credit to CowelFs compositional skills and to the empathetic independence of all the players. The range of expression is very broad and colorful - from "Miss Viki" on the one hand, funky and fat as you please (and the easy equal of any of Herbie Hancock 's recent strong work) to "Astral Spiritual" which is almost totally free of conventional time and harmonie considerations. All three musicians are on all the time and ECM production gives you both separation and depth you've never heard the like of before, allowing you, among other marvels, the clearest chance yet to hear the indescribably delicious bass work of young Stanley Clarke. He 's simply too much. Listen especially to "Cal Massey" (a dedication to and evocation of the late trumpetercomposerarranger) and to "Emil Danenberg." Hopps is likewise very inventive and hurhorous. Cowell meantime is clearly his own man. You'll hear traces of Ellington and Hancock and Cecil Taylor but Cowell's is a distinctive voice we'll hopefully be hearing more of, if ECMPolydor is on their toes. With the release of "lllusion Suite" their catalogue boasts one of the highest deepest piano trio dates since McCoy Tyner's work with Elvin Jones a decade ago. Fuck, this is one of the best jazz albums of any description to be released in ... far too long. Not so revolutionary, mind you, as totally, rnasterfully comprehensiva Check this mother out.