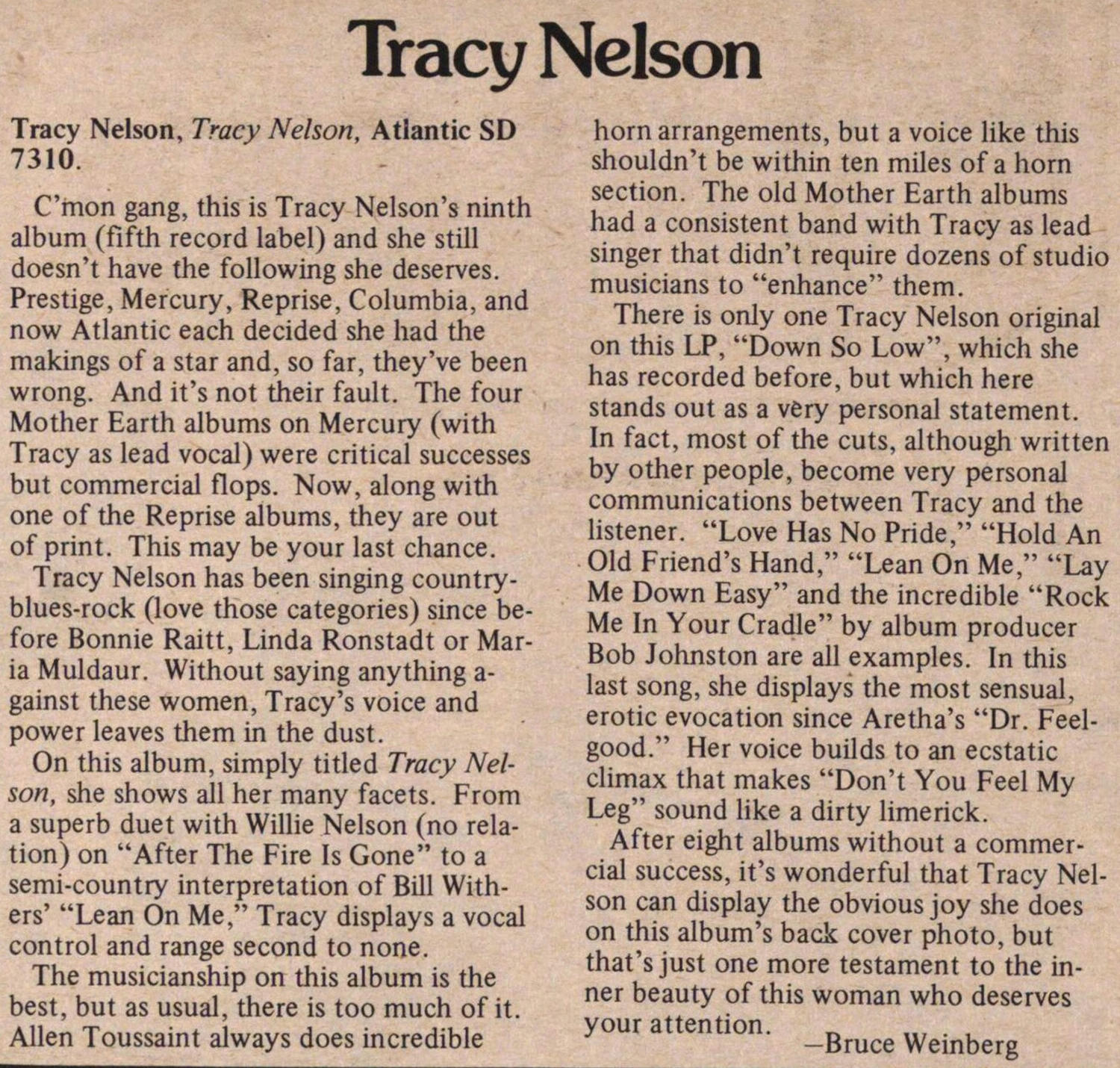 Tracy Nelson, Tracy Nelson, Atlantic SD 7310. C'mon gang, this is Tracy Nelson's ninth album (fifth record label) and she still doesn't have the following she deserves. Prestige, Mercury, Reprise, Columbia, and now Atlantic each decided she had the makings of a star and, so far, they've been wrong. And it's not their fault. The four Mother Earth albums on Mercury (with Tracy as lead vocal) were critical successes but commercial flops. Now, along with one of the Reprise albums, they are out of print. This may be your last chance. Tracy Nelson has been singing countryblues-rock (love those categories) since before Bonnie Raitt, Linda Ronstadt or Maria Muldaur. Without saying anything against these women, Tracy's voice and power leaves them in the dust. On this album, simply titled Tracy Nelson, she shows all her many facets. From a superb duet with Willie Nelson (no relation) on "After The Fire Is Gone" to a semi-country interpretation of Bill Withers' "Lean On Me," Tracy displays a vocal control and range second to none. The musicianship on this album is the best, but as usual, there is too much of it. Allen Toussaint always does incredible hom arrangements, but a voice like this shouldn't be within ten miles of a horn section. The old Mother Earth albums had a consistent band with Tracy as lead singer that didn't require dozens of studio musicians to "enhance" them. There is only one Tracy Nelson original on this LP, "Down So Low", which she has recorded before, but which here stands out as a very personal statement. In fact, most of the cuts, although written by other people, become very personal Communications between Tracy and the listener. "Love Has No Pride," "Hold An Old Friend's Hand," "Lean On Me," "Lay Me Down Easy" and the incredible "Rock Me In Your Cradle" by album producer Bob Johnston are all examples. In this last song, she displays the most sensual, erotic evocation since Aretha's "Dr. Feelgood." Her voice builds to an ecstatic climax that makes "Don't You Feel My Leg" sound like a dirty limerick. After eight albums without a commercial success, it's wonderful that Tracy Nelson can display the obvious joy she does on this album's back cover photo, but that's just one more testament to the inner beauty of this woman who deserves your attention.