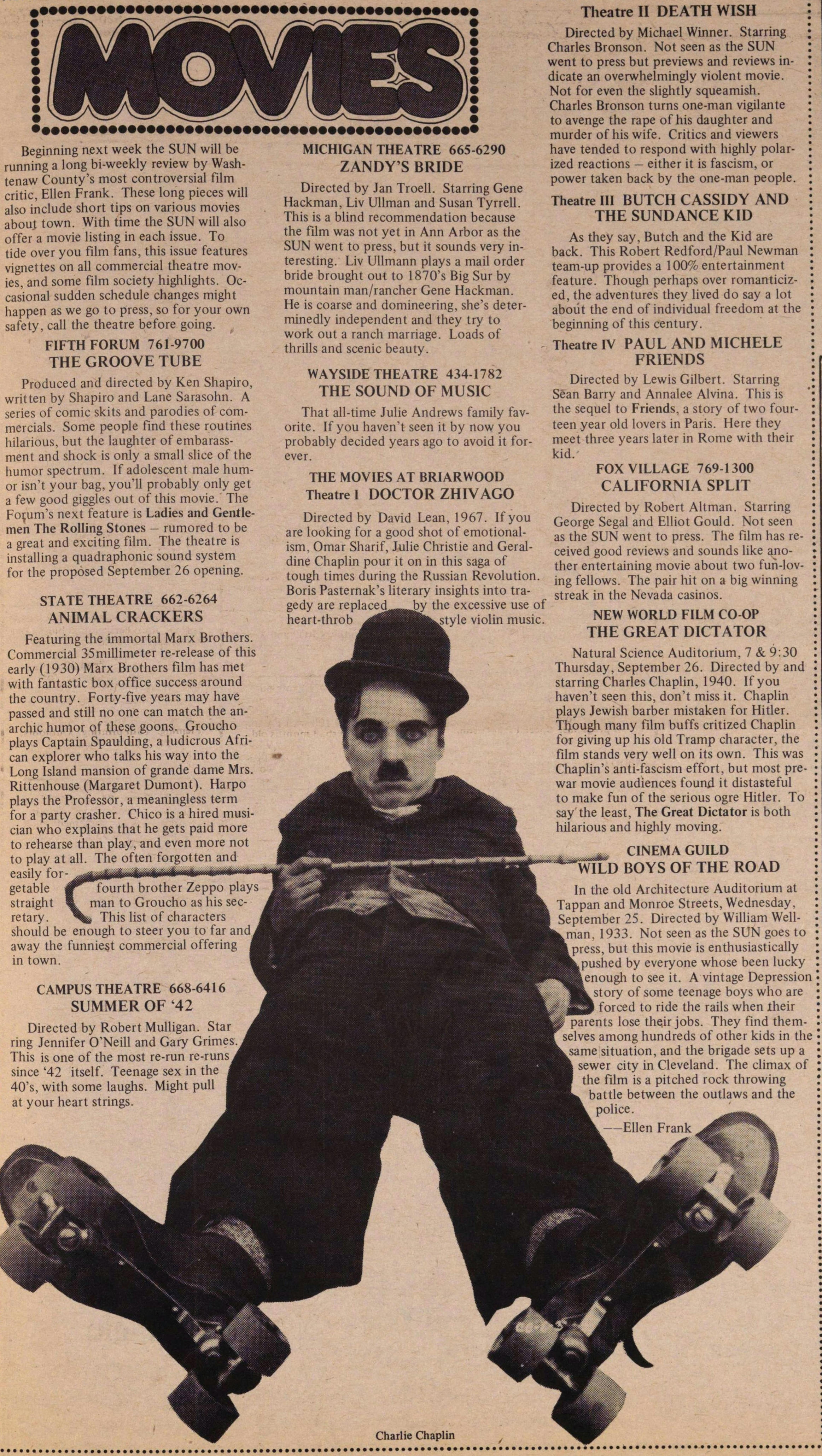 Beginning next week the SUN will be running a long bi-weekly review by Washtenaw County's most controversial film critic, Ellen Frank. These long pieces will also include short tips on various movies about town. With time the SUN will also offer a movie listing in each issue. To tide over you film fans, this issue features vignettes on all commercial theatre movies, and some film society highlights. Occasional sudden schedule changes might happen as we go to press, so for your own safety, call the theatre before going.

FIFTH FORUM 761-9700 THE GROOVE TUBE Produced and directed by Ken Shapiro, written by Shapiro and Lane Sarasohn. A series of comic skits and parodies of commercials. Some people find these routines hilarious, but the laughter of embarrassment and shock is only a small slice of the humor spectrum. If adolescent male humor isn't your bag, you'll probably only get a few good giggles out of this movie. The Forum's next feature is Ladies and Gentlemen The Rolling Stones - rumored to be a great and exciting film. The theatre is installing a quadraphonic sound system for the proposed September 26 opening.

STATE THEATRE 662-6264 ANIMAL CRACKERS Featuring the immortal Marx Brothers. Commercial 35 millimeter re-release of this early (1930) Marx Brothers film has met with fantastic box office success around the country. Forty-five years may have passed and still no one can match the anarchic humor of these goons. Groucho plays Captain Spaulding, a ludicrous African explorer who talks his way into the Long Island mansion of grande dame Mrs. Rittenhouse (Margaret Dumont). Harpo plays the Professor, a meaningless term for a party crasher. Chico is a hired musician who explains that he gets paid more to rehearse than play, and even more not to play at all. The often forgotten and easily forgettable fourth brother Zeppo plays straight man to Groucho as his secretary. This list of characters should be enough to steer you to far and away the funniest commercial offering in town.

CAMPUS THEATRE 668-6416 SUMMER OF '42 Directed by Robert Mulligan. Starring Jennifer O'Neill and Gary Grimes This is one of the most re-run re-runs since '42 itself. Teenage sex in the i 40's, with some laughs. Might pull at your heart strings.

MICHIGAN THEATRE 665-6290 ZANDY'S BRIDE Directed by Jan Troell. Starring Gene Hackman, Liv Ullman and Susan Tyrrell. This is a blind recommendation because the film was not yet in Ann Arbor as the SUN went to press, but it sounds very interesting. Liv Ullmann plays a mail order bride brought out to 1870's Big Sur by mountain man/rancher Gene Hackman. He is coarse and domineering, she's determinedly independent and they try to work out a ranch marriage. Loads of thrills and scenic beauty.

WAYSIDE THEATRE 434-1782 THE SOUND OF MUSIC That all-time Julie Andrews family favorite. If you haven't seen it by now you probably decided years ago to avoid it forever.

THE MOVIES AT BRIARWOOD  Theatre I DOCTOR ZHIVAGO Directed by David Lean, 1967. If you are looking for a good shot of emotionalism, Omar Sharif, Julie Christie and Geraldine Chaplin pour it on in this saga of tough times during the Russian Revolution. Boris Pasternak's literary insights into tragedy are replaced by the excessive use of heart-throb style violin music.   Theatre II DEATH WISH Directed by Michael Winner. Starring Charles Bronson. Not seen as the SUN went to press but previews and reviews indicate an overwhelmingly violent movie. Not for even the slightly squeamish. Charles Bronson turns one-man vigilante to avenge the rape of his daughter and murder of his wife. Critics and viewers have tended to respond with highly polarized reactions - either it is fascism, or power taken back by the one-man people.   Theatre III BUTCH CASSIDY AND THE SUNDANCE KID As they say, Butch and the Kid are back. This Robert Redford/Paul Newman team-up provides a 100% entertainment feature. Though perhaps over romanticized, the adventures they lived do say a lot about the end of individual freedom at the beginning of this century.   Theatre IV PAUL AND MICHELE FRIENDS Directed by Lewis Gilbert. Starring Sean Barry and Annalee Alvina. This is the sequel to Friends, a story of two fourteen year old lovers in Paris. Here they meet three years later in Rome with their kid.

FOX VILLAGE 769-1300 CALIFORNIA SPLIT Directed by Robert Altman. Starring George Segal and Elliot Gould. Not seen as the SUN went to press. The film has received good reviews and sounds like another entertaining movie about two fun-loving fellows. The pair hit on a big winning streak in the Nevada casinos.

NEW WORLD FILM COOP  THE GREAT DICTATOR Natural Science Auditorium, 7 & 9:30 Thursday, September 26. Directed by and starring Charles Chaplin, 1940. If you haven't seen this, don't miss it. Chaplin plays Jewish barber mistaken for Hitler. Though many film buffs criticized Chaplin for giving up his old Tramp character, the film stands very well on its own. This was Chaplin's anti-fascism effort, but most pre-war movie audiences found it distasteful to make fun of the serious ogre Hitler. To say the least, The Great Dictator is both hilarious and highly moving.

CINEMA GUILD WILD BOYS OF THE ROAD In the old Architecture Auditorium at Tappan and Monroe Streets, Wednesday, September 25. Directed by William Wellman, 1933. Not seen as the SUN goes to press, but this movie is enthusiastically pushed by everyone whose been lucky enough to see it. A vintage Depression story of some teenage boys who are forced to ride the rails when their parents lose their jobs. They find themselves among hundreds of other kids in the same situation, and the brigade sets up a sewer city in Cleveland. The climax of the film is a pitched rock throwing battle between the outlaws and the police.  --Ellen Frank