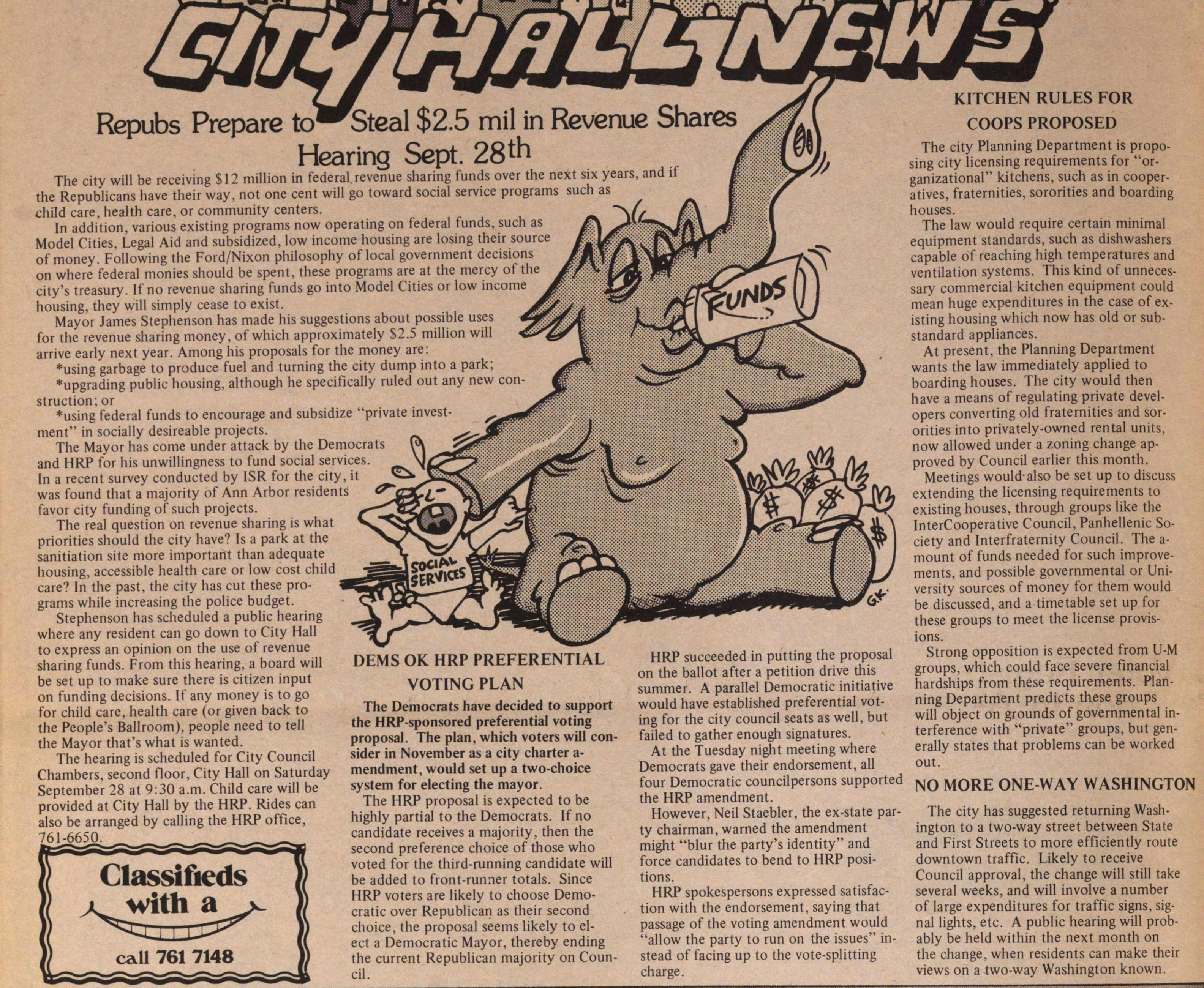 The city will be receiving $12 million in federal. revenue sharing funds over the next six years, and if the Republicans have their way, not one cent will go toward social service programs such as child care, health care, or community centers.

In addition, various existing programs now operating on federal funds, such as Model Cities, Legal Aid and subsidized, low income housing are losing their source of money. Following the Ford/Nixon philosophy of local government decisions on where federal monies should be spent, these programs are at the mercy of the city's treasury. If no revenue sharing funds go into Model Cities or low income housing, they will simply cease to exist.        Mayor James Stephenson has made his suggestions about possible uses  for the revenue sharing money, of which approximately $2.5 million will arrive early next year. Among his proposals for the money are:

*using garbage to produce fuel and turning the city dump into a park;

*upgrading public housing, although he specifically ruled out any new construction; or

The Mayor has come under attack by the Democrats and HRP for his unwillingness to fund social services. In a recent survey conducted by ISR for the city, it was found that a majority of Ann Arbor residents favor city funding of such projects.

The real question on revenue sharing is what priorities should the city have? Is a park at the sanitiation site more important than adequate housing, accessible health care or low cost child care? In the past, the city has cut these programs while increasing the police budget.

Stephenson has scheduled a public hearing where any resident can go down to City Hall to express an opinion on the use of revenue sharing funds. From this hearing, a board will be set up to make sure there is citizen input on funding decisions. If any money is to go for child care, health care (or given back to the People's Ballroom), people need to tell the Mayor that's what is wanted.

The hearing is scheduled for City Council Chambers, second floor, City Hall on Saturday September 28 at 9:30 a.m. Child care will be provided at City Hall by the HRP. Rides can also be arranged by calling the HRP office, 761-6650.

The Democrats have decided to support the HRP-sponsored preferential voting proposal. The plan, which voters will consider in November as a city charter amendment, would set up a two-choice system for electing the mayor.

The HRP proposal is expected to be highly partial to the Democrats. If no candidate receives a majority, then the second preference choice of those who voted for the third-running candidate will be added to front-runner totals. Since HRP voters are likely to choose Democrat over Republican as their second choice, the proposal seems likely to elect a Democratic Mayor, thereby ending the current Republican majority on Council.         HRP succeeded in putting the proposal on the ballot after a petition drive this summer. A parallel Democratic initiative would have established preferential voting for the city council seats as well, but failed to gather enough signatures.

At the Tuesday night meeting where Democrats gave their endorsement, all four Democratic councilpersons supported the HRP amendment.

However, Neil Staebler, the ex-state party chairman, warned the amendment might "blur the party's identity" and force candidates to bend to HRP positions.

HRP spokespersons expressed satisfaction with the endorsement, saying that passage of the voting amendment would "allow the party to run on the issues" instead of facing up to the vote-splitting charge.

The city Planning Department is proposing city licensing requirements for "organizational" kitchens, such as in cooperatives, fraternities, sororities and boarding houses.

The law would require certain minimal equipment standards, such as dishwashers capable of reaching high temperatures and ventilation systems. This kind of unnecessary commercial kitchen equipment could mean huge expenditures in the case of existing housing which now has old or substandard appliances.

At present, the Planning Department wants the law immediately applied to boarding houses. The city would then have a means of regulating private developers converting old fraternities and sororities into privately-owned rental units, now allowed under a zoning change approved by Council earlier this month.

Meetings also be set up to discuss extending the licensing requirements to existing houses, through groups like the InterCooperative Council, Panhellenic Society and Interfraternity Council. The amount of funds needed for such improvements, and possible governmental or University sources of money for them would be discussed, and a timetable set up for these groups to meet the license provisions. Strong opposition is expected from U-M groups, which could face severe financial hardships from these requirements. Planning Department predicts these groups will object on grounds of governmental interference with "private" groups, but generally states that problems can be worked out.

The city has suggested returning Washington to a two-way street between State and First Streets to more efficiently route downtown traffic. Likely to receive Council approval, the change will still take several weeks, and will involve a number of large expenditures for traffic signs, signal lights, etc. A public hearing will probably be held within the next month on the change, when residents can make their views on a two-way Washington known.