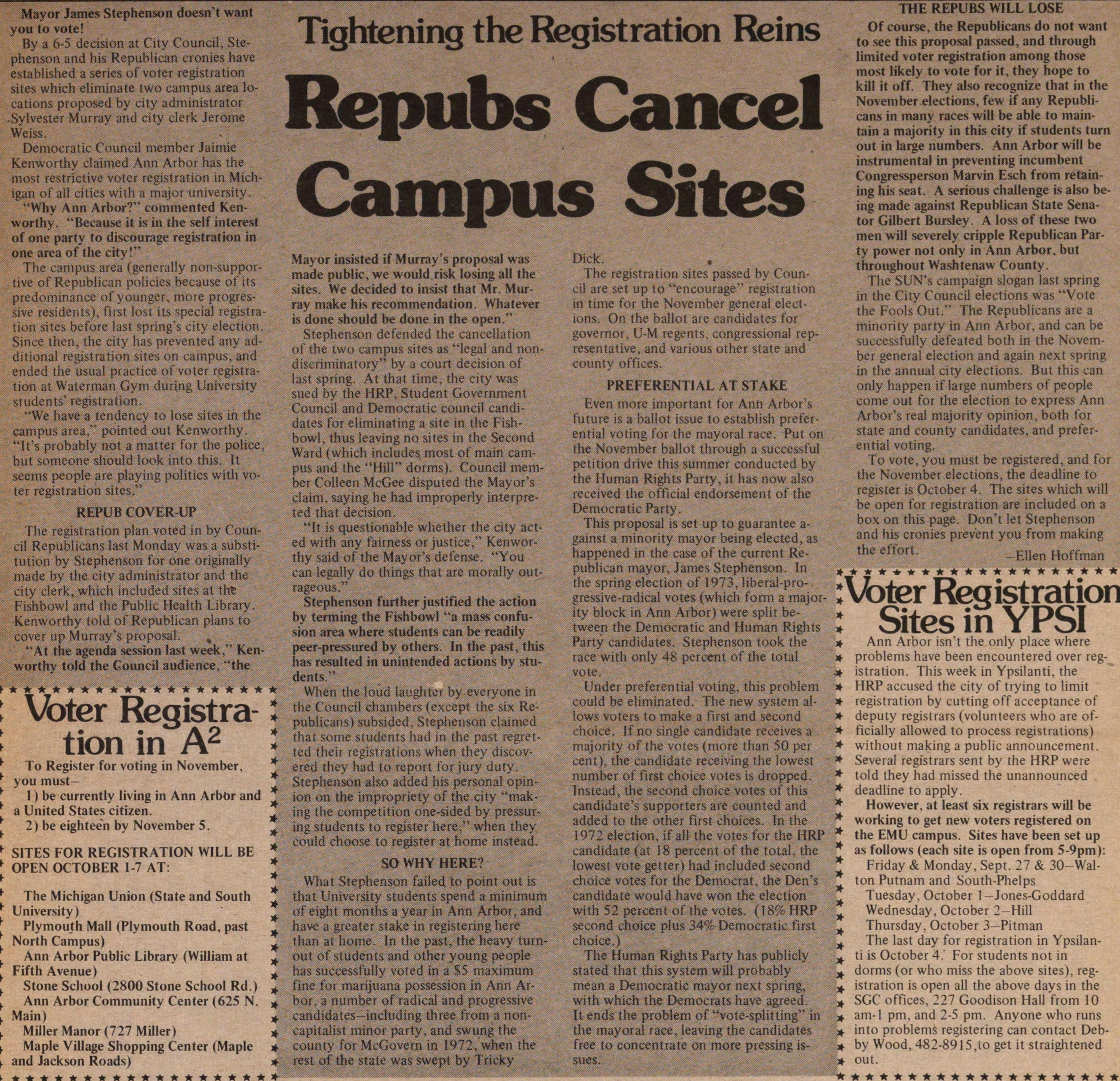 By a 6-5 decision at City Council, Stephenson and his Republican cronies have established a series of voter registration sites which eliminate two campus area locations proposed by city administrator Sylvester Murray and city clerk Jerome Weiss.

Democratic Council member Jaimie Kenworthy claimed Ann Arbor has the most restrictive voter registration in Michigan of all cities with a major university.

"Why Ann Arbor?" commented Kenworthy. "Because it is in the self interest of one party to discourage registration in one area of the city!'"

The campus area (generally non-supportive of Republican policies because of its predominance of younger, more progressive residents), first lost its special registration sites before last spring's city election. Since then, the city has prevented any additional registration sites on campus, and ended the usual practice of voter registration at Waterman Gym during University students' registration.

"We have a tendency to lose sites in the campus area," pointed out Kenworthy. "It's probably not a matter for the police, but someone should look into this. It seems people are playing politics with voter registration sites."

The registration plan voted in by Council Republicans last Monday was a substitution by Stephenson for one originally made by the city administrator and the city clerk, which included sites at the Fishbowl and the Public Health Library. Kenworthy told of Republican plans to cover up Murray's proposal.

"At the agenda session last week," Kenworthy told the Council audience, "'the Mayor insisted if Murray's proposal was made public, we would risk losing all the sites. We decided to insist that Mr. Murray make his recommendation. Whatever is done should be done in the open."

Stephenson defended the cancellation of the two campus sites as "legal and nondiscriminatory" by a court decision of last spring. At that time, the city was sued by the HRP, Student Government Council and Democratic council candidates for eliminating a site in the Fishbowl, thus leaving no sites in the Second Ward (which includes most of main campus and the "Hill" dorms). Council member Colleen McGee disputed the Mayor's claim, saying he had improperly interpreted that decision.

"It is questionable whether the city acted with any fairness or justice," Kenworthy said of the Mayor's defense. "You can legally do things that are morally outrageous."

Stephenson further justified the action by terming the Fishbowl "a mass confusion area where students can be readily peer-pressured by others. In the past, this has resulted in unintended actions by students."

When the loud laughter by everyone in the Council chambers (except the six Republicans) subsided, Stephenson claimed that some students had in the past regretted their registrations when they discovered they had to report for jury duty. Stephenson also added his personal opinion on the impropriety of the city "making the competition one-sided by pressuring students to register here," when they could choose to register at home instead.

What Stephenson failed to point out is that University students spend a minimum of eight months a year in Ann Arbor, and have a greater stake in registering here than at home. In the past, the heavy turnout of students and other young people has successfully voted in a $5 maximum fine for marijuana possession in Ann Arbor, a number of radical and progressive candidates-including three from a non-capitalist minor party, and swung the county for McGovern in 1972, when the rest of the state was swept by Tricky Dick.

The registration sites passed by Council are set up to "encourage" registration in time for the November general elections. On the ballot are candidates for governor, U-M regents, congressional representative, and various other state and county offices.

Even more important for Ann Arbor's future is a ballot issue to establish preferential voting for the mayoral race. Put on the November ballot through a successful petition drive this summer conducted by the Human Rights Party, it has now also received the official endorsement of the Democratic Party.

This proposal is set up to guarantee against a minority mayor being elected, as happened in the case of the current Republican mayor, James Stephenson. In the spring election of 1973, liberal-progressive-radical votes (which form a majority block in Ann Arbor) were split be tween the Democratic and Human Rights Party candidates. Stephenson took the race with only 48 percent of the total vote.

The Human Rights Party has publicly stated that this system will probably , mean a Democratic mayor next spring, with which the Democrats have agreed. It ends the problem of "vote-splitting" in the mayoral race, leaving the candidates free to concentrate on more pressing issues.

THE REPUBS WILL LOSE

Of course, the Republicans do not want to see this proposal passed. and through limited voter registration among those most likely to vote for it, they hope to kill it off. They also recognize that in the November elections, few if any Republicans in many races will be able to maintain a majority in this city if students turn out in large numbers. Ann Arbor will be instrumental in preventing incumbent Congressperson Marvin Esch from retaining his seat. A serious challenge is also being made against Republican State Senator Gilbert Bursley. A loss of these two men will severely cripple Republican Party power not only in Ann Arbor. but throughout Washtenaw County.

The SUN's campaign slogan last spring in the City Council elections was "Vote the Fools Out." The Republicans are a minority party in Ann Arbor, and can be successfully defeated both in the November general election and again next spring in the annual city elections. But this can only happen if large numbers of people come out for the election to express Ann Arbor's real majority opinion, both for state and county candidates, and preferential voting.

To vote, you must be registered, and for the November elections, the deadline to register is October 4. The sites which will be open for registration are included on a box on this page. Don't let Stephenson and his cronies prevent you from making the effort.