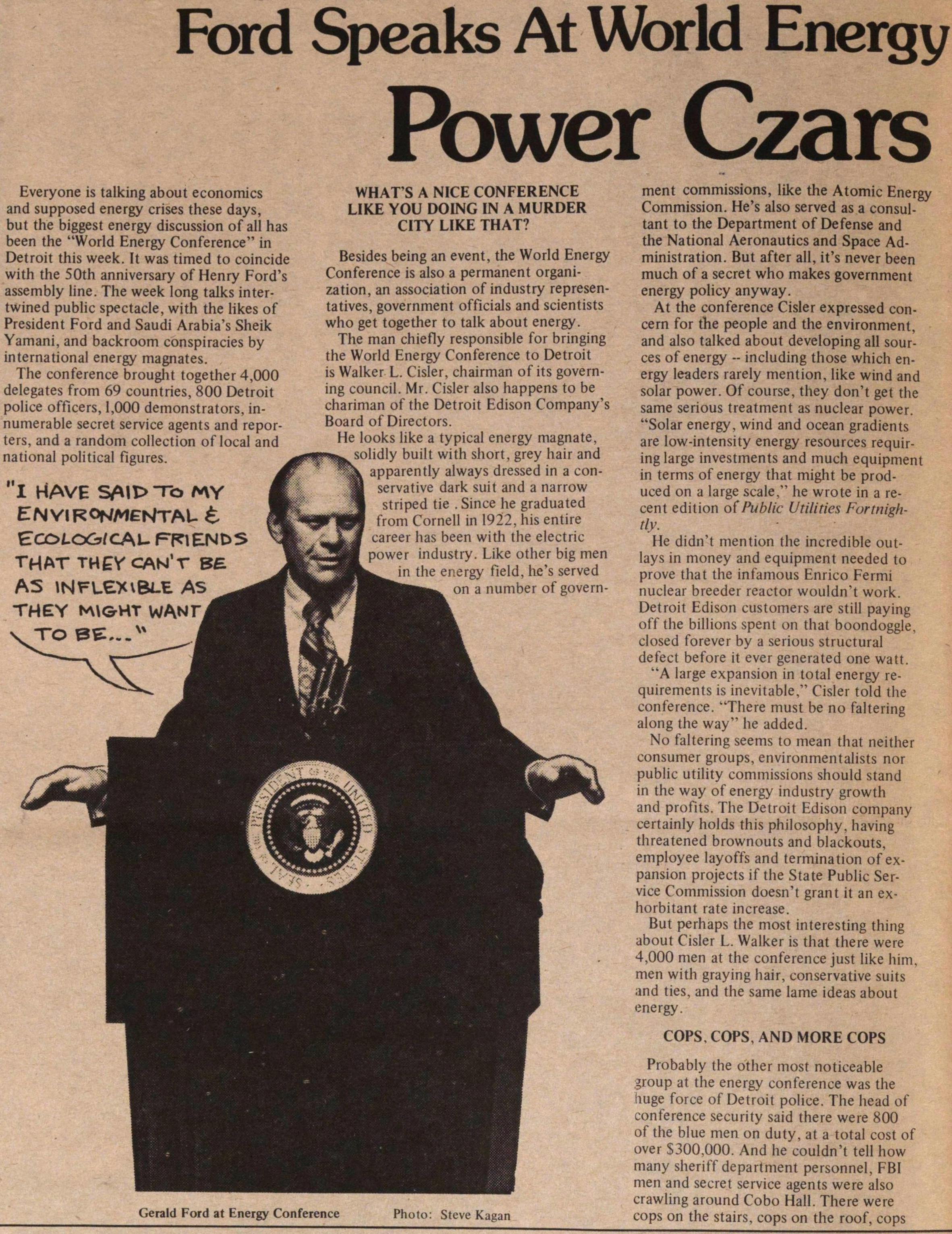 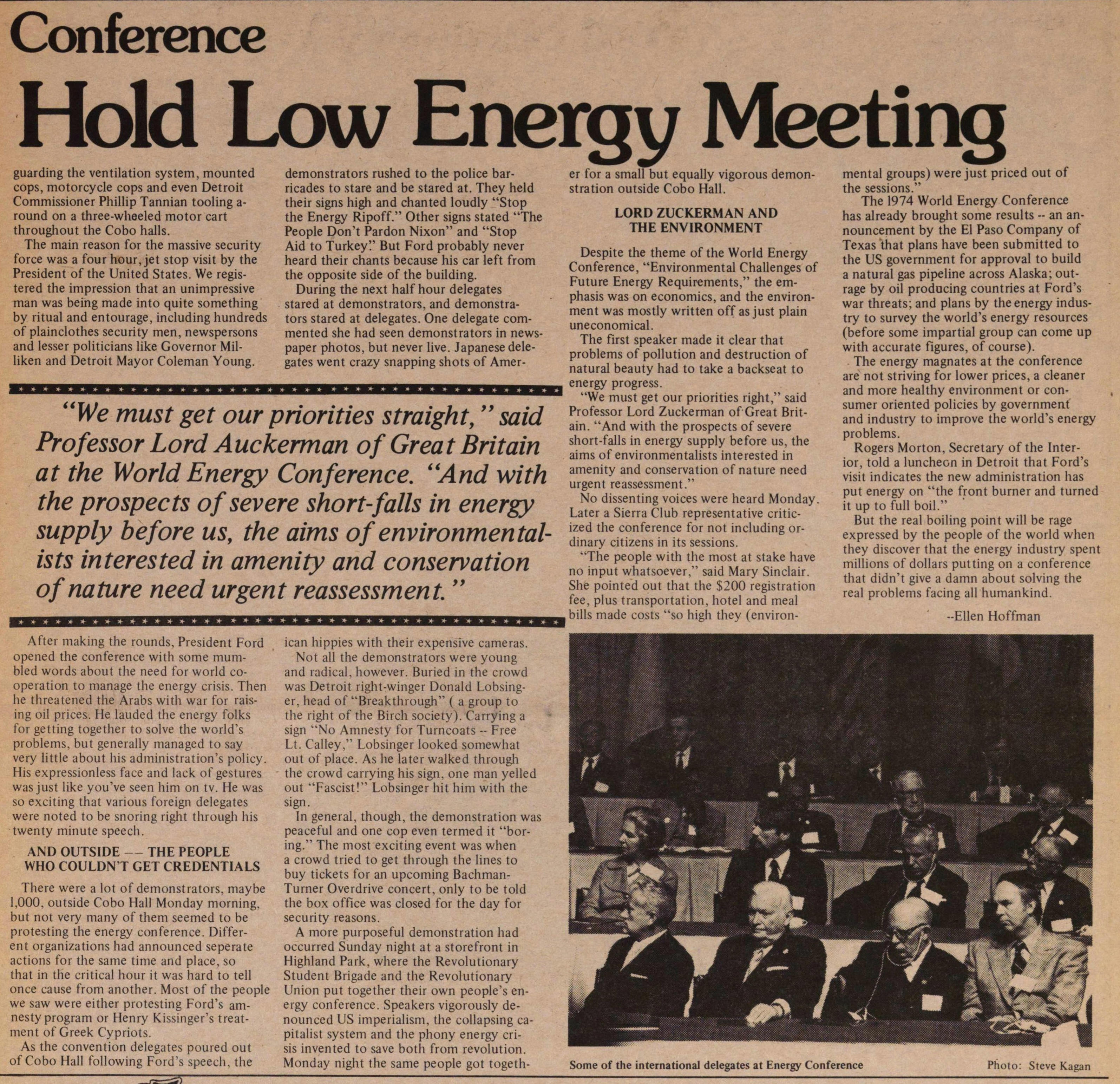 Everyone is talking about economics and supposed energy crises these days, but the biggest energy discussion of all has been the "World Energy Conference" in Detroit this week. It was timed to coincide with the 50th anniversary of Henry Ford's assembly line. The week long talks intertwined public spectacle, with the likes of President Ford and Saudi Arabia's Sheik Yamani, and backroom conspiracies by international energy magnates.

Besides being an event, the World Energy Conference is also a permanent organization, an association of industry representatives, government officials and scientists who get together to talk about energy.

The man chiefly responsible for bringing the World Energy Conference to Detroit is Walker L. Cisler, chairman of its governing council. Mr. Cisler also happens to be chairman of the Detroit Edison Company's Board of Directors.

He looks like a typical energy magnate, solidly built with short, grey hair and apparently always dressed in a servative dark suit and a narrow striped tie. Since he graduated from Cornell in 1922, his entire career has been with the electric power industry. Like other big men in the energy field, he's served on a number of government commissions, like the Atomic Energy Commission. He's also served as a consultant to the Department of Defense and the National Aeronautics and Space Administration. But after all, it's never been much of a secret who makes government energy policy anyway.

At the conference Cisler expressed concern for the people and the environment, and also talked about developing all sources of energy -- including those which energy leaders rarely mention, like wind and solar power. Of course, they don't get the same serious treatment as nuclear power. "Solar energy, wind and ocean gradients are low-intensity energy resources requiring large investments and much equipment in terms of energy that might be produced on a large scale," he wrote in a recent edition of Public Utilities Fortnightly.

He didn't mention the incredible outlays in money and equipment needed to prove that the infamous Enrico Fermi nuclear breeder reactor wouldn't work. Detroit Edison customers are still paying off the billions spent on that boondoggle, closed forever by a serious structural defect before it ever generated one watt.

"A large expansion in total energy requirements is inevitable," Cisler told the conference. "There must be no faltering along the way" he added.

No faltering seems to mean that neither consumer groups, environmentalists nor public utility commissions should stand in the way of energy industry growth and profits. The Detroit Edison company certainly holds this philosophy, having threatened brownouts and blackouts, employee layoffs and termination of expansion projects if the State Public Service Commission doesn't grant it an exorbitant rate increase.

But perhaps the most interesting thing about Cisler L. Walker is that there were 4,000 men at the conference just like him. men with graying hair, conservative suits and ties, and the same lame ideas about energy.

Probably the other most noticeable group at the energy conference was the huge force of Detroit police. The head of conference security said there were 800 of the blue men on duty, at a total cost of over $300,000. And he couldn't tell how many sheriff department personnel, FBI men and secret service agents were also crawling around Cobo Hall. There were cops on the stairs, cops on the roof, cops guarding the ventilation system, mounted cops, motorcycle cops and even Detroit Commissioner Phillip Tannian tooling around on a three-wheeled motor cart throughout the Cobo halls.

The main reason for the massive security force was a four hour, jet stop visit by the President of the United States. We registered the impression that an unimpressive man was being made into quite something by ritual and entourage, including hundreds of plainclothes security men, newspersons and lesser politicians like Governor Milliken and Detroit Mayor Coleman Young.

After making the rounds. President Ford opened the conference with some mumbled words about the need for world cooperation to manage the energy crisis. Then he threatened the Arabs with war for raising oil prices. He lauded the energy folks for getting together to solve the world's problems, but generally managed to say very little about his administration's policy. His expressionless face and lack of gestures was just like you've seen him on tv. He was so exciting that various foreign delegates were noted to be snoring right through his twenty minute speech.

AND OUTSIDE - THE PEOPLE WHO COULDNT GET CREDENTIALS

There were a lot of demonstrators, maybe 1.000. outside Cobo Hall Monday morning, but not very many of them seemed to be protesting the energy conference. Different organizations had announced separate actions for the same time and place, so that in the critical hour it was hard to tell one cause from another. Most of the people we saw were either protesting Ford's amnesty program or Henry Kissinger's treatment of Greek Cypriots.

As the convention delegates poured out of Cobo Hall following Ford's speech, the demonstrators rushed to the police barricades to stare and be stared at. They held their signs high and chanted loudly "Stop the Energy Ripoff." Other signs stated "The People Don't Pardon Nixon" and "Stop Aid to Turkey". But Ford probably never heard their chants because his car left from the opposite side of the building.

Not all the demonstrators were young and radical, however. Buried in the crowd was Detroit right-winger Donald Lobsinger, head of "Breakthrough" (a group to the right of the Birch society). Carrying a sign "No Amnesty for Turncoats -- Free Lt. Calley," Lobsinger looked somewhat out of place. As he later walked through the crowd carrying his sign, one man yelled out "Fascist!" Lobsinger hit him with the sign.

In general, though, the demonstration was peaceful and one cop even termed it "boring." The most exciting event was when a crowd tried to get through the lines to buy tickets for an upcoming Bachman-Turner Overdrive concert, only to be told the box office was closed for the day for security reasons.

A more purposeful demonstration had occurred Sunday night at a storefront in Highland Park, where the Revolutionary Student Brigade and the Revolutionary Union put together their own people's energy conference. Speakers vigorously denounced US imperialism, the collapsing capitalist system and the phony energy crisis invented to save both from revolution. Monday night the same people got together for a small but equally vigorous demonstration outside Cobo Hall.

LORD ZUCKERMAN AND THE ENVIRONMENT

Despite the theme of the World Energy Conference, "Environmental Challenges of Future Energy Requirements," the emphasis was on economics, and the environment was mostly written off as just plain uneconomical.

The first speaker made it clear that problems of pollution and destruction of natural beauty had to take a backseat to energy progress.

"We must get our priorities right," said Professor Lord Zuckerman of Great Britain. "And with the prospects of severe short-falls in energy supply before us, the aims of environmentalists interested in amenity and conservation of nature need urgent reassessment."

No dissenting voices were heard Monday. Later a Sierra Club representative criticized the conference for not including ordinary citizens in its sessions.

"The people with the most at stake have no input whatsoever," said Mary Sinclair. She pointed out that the $200 registration fee, plus transportation, hotel and meal bills made costs "so high they (environmental groups) were just priced out of the sessions."

The 1974 World Energy Conference has already brought some results -- an announcement by the El Paso Company of Texas that plans have been submitted to the US government for approval to build a natural gas pipeline across Alaska; outrage by oil producing countries at Ford's war threats; and plans by the energy industry to survey the world's energy resources (before some impartial group can come up with accurate figures, of course).

The energy magnates at the conference are not striving for lower prices, a cleaner and more healthy environment or consumer oriented policies by government and industry to improve the world's energy problems.

Rogers Morton, Secretary of the Interior, told a luncheon in Detroit that Ford's visit indicates the new administration has put energy on "the front burner and turned it up to full boil."

But the real boiling point will be rage expressed by the people of the world when they discover that the energy industry spent millions of dollars putting on a conference that didn't give a damn about solving the real problems facing all humankind.