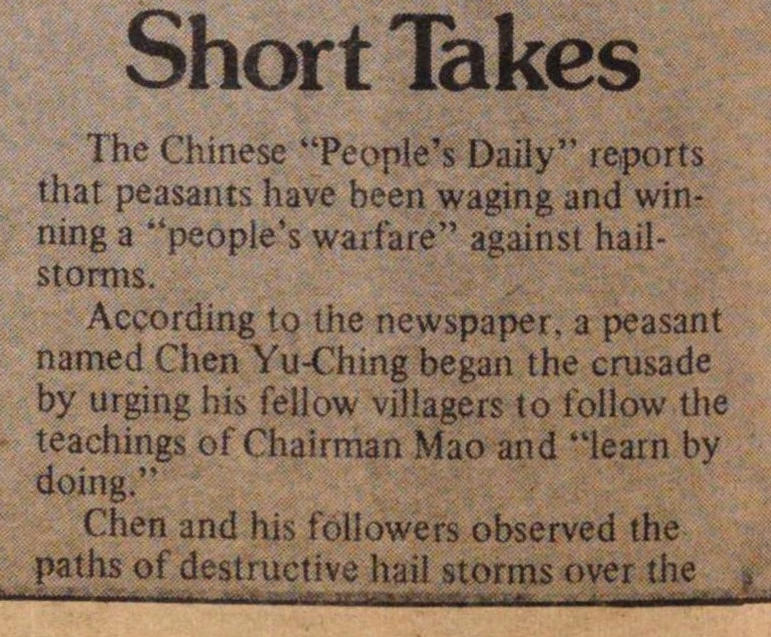 The Chinese "People's Daily" reports that peasants have been waging and winning a "people's warfare" against hailstorms.

According to the newspaper. a peasant named Chen Yu-Ching began the crusade by urging his fellow villagers to follow the teachings of Chairman Mao and "learn by doing."

Chen and his followers observed the paths of destructive hail storms over the mountains, then went to the mountain peaks to meet the storms head on. The army of peasants, armed with 50 homemade rocket launchers and 127 chemical-firing guns, blasted away at the clouds.

The "People's Daily" says the warfare worked wonders - and that now 2300 peasants periodically fire more than 4000 anti-hail weapons at clouds to save crops. The newspaper credits the war against hail with helping to double China's grain output since 1969.

The People's Revolutionary Army in Argentina has collected almost $90 million from kidnapping corporate executives in the past year. It has reached the point where the guerrillas now frequently do nothing more than call up a company and say : "It's your turn to contribute." The guerrillas say they are donating some of the money to help similar movements in Latin America . Up to $8 million has reportedly been donated to resistance groups in Chile and Uruguay. --Zodiac

While the average life expectancy of most Americans has increased in recent decades, the life expectancy of black Americans is growing shorter. The Michigan Office of Health and Medical Affairs reports that today a 15 year-old black male will make it, on the average, only to age 64. Ten years ago a 15 year-old black male could have expected to live to age 68.