Prairie Fire "you Don't Need A Weatherman To Know Which Way The Wind Blows." 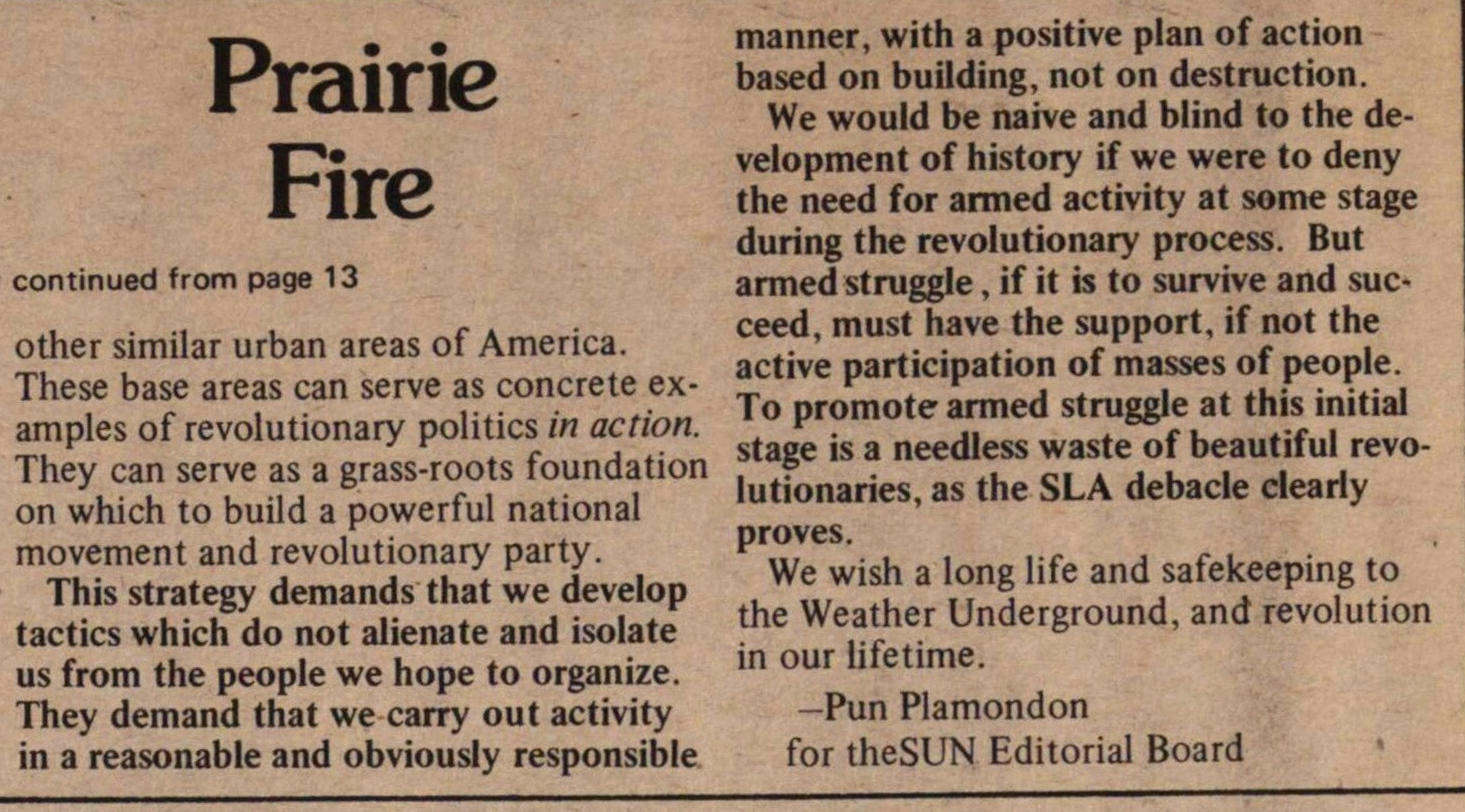 Since 1969 the Weather Underground has survived, hidden in the bowels of Babylon. They have been hunted by the FBI, the CIA and no one knows how many counter-insurgency teams and secret police intelligence units. In August of this year, the Weather Underground published Prairie Fire, their latest political statement and ideology.

Besides analyzing the current national and international situation, Prairie Fire presents a plan for action. The SUN finds the Weather Underground analysis of imperialism's downfall basically correct, as most people in the world would. Their analysis of the real and phony energy crisis, the circus government, the significance of the Vietnamese struggle and their impression of American history are all useful. Their views on sexism, racism, neocolonialism, monopoly capital and the role of women in revolution are easy to follow and would be useful reading for most people.

Unfortunately the Weather Underground's plan for action is devoid of realistic thinking and practical politics needed to rally support. The Weather Underground believes the time ripe for armed guerilla actions in this country. However, their program is rooted in the romanticism and abstractions of the student movement. It will not win the endorsement of the masses of people, political organizations engaged in mass work, or realistic thinkers.

Like the "student movement," Prairie Fire is short concrete direction, long on slogans and pep talks. "Go to the People," "Organize the People," and other leftist slogans sound like meaningless twaddle from an organization which unnecessarily went underground and isolated itself from people's daily lives.

The Weather Underground developed out of a three-way split at the 1968 National Convention of the Students for a Democratic Society (SDS).

The Weatherman faction was the most militant, had the greatest numbers as well as most of the SDS national leadership. The Progressive Labor Party was the second largest and was made up mostly of dogmatic type, old line/new leftists. Finally there was the Revolutionary Youth Movement, which later split into "RYM I and II."

Following the convention, the Weatherpeople held a War Council in Flint where they made plans to go underground. Their last above-ground action was the "Days of Rage" in Chicago, October 1969, where they smashed windows and fought the "pigs." Since then they have claimed responsibility for some 18 bombings, whose targets have included such symbols of exploitation as the headquarters of United Fruit and ITT, the Pentagon and the U.S. Capitol. The Weather Underground also busted (temporarily) Tim Leary out of prison, has issued various communiques and political statements, and has now published a book. From the very beginning, however, their acts of trashing and terrorism have been relatively ineffectual. Without an organized, aboveground political movement to back up and define their actions, the underground's bombings, etc., have been used against the anti-imperalist forces in the U.S. to portray us in the media as ridiculous, idealistic, violent, and without a single virtue. At best their acts have had a small effect on the day to day struggle of the people, at worse they have set it back. In general they are mere gestures.

To typify this situation, when Prairie fire was released it was accompanied by stories in the mass media which headlined that the Weatherpeople had "claimed credit for 18 bombings and violent acts." Of course the media made no mention of their accurate analysis of America's world position contained in the book, simply focusing on the violence, thereby keeping the public from getting to the useful ideas in Prairie Fire.

The title for Prairie Fire is taken from an essay written by Mao Tse-Tung in January, 1930. His essay, "A Single Spark Can Start a Prairie Fire" refuted the pessimistic and apathetic views held by various segments of the Chinese Communist Party in particular and the revolutionary movement in general. Mao begins his essay by saying, "Some comrades in our Party still do not know how to appraise the current situation correctly and how to settle the attendant question of what action to take. Regrettably, the Weather Underground too has failed to answer the attendant question of what action to take.

In the introduction Bernadine Dohrn, Billy Ayers, Jeff Jones, Celia Sojurn, speaking for the Weather Underground, announce Prairie Fire as "-- a strategy for anti-imperalism and revolution inside the imperial U.S." Later they go on to say: "Our movement urgently needs a concrete analysis of the particular conditions of our time and place. We need strategy. We need o battle for a correct ideology and win people over. In this way we create the conditions for the development of a successful revolutionary movement and party." Which is all very true.

However, in the opening section of the book, under the section titled "The Banner of Che," the Weather Underground picks the wrong strategy. They write, "We are a guerilla organization. Our intention is to disrupt the empire... to incapacitate it... Our intention is to engage the enemy... to wear away at him, to harass him, to isolate him... Our intention is to encourage the people... to provoke leaps in confidence and consciousness, to stir the imagination... Revolutionary war will be complicated and protracted. It includes mass struggle and clandestine struggle, peaceful and violent, political and economic, cultural and military, where all forms are developed in harmony with the armed struggle."

The Weather Underground and other abstract radicals grasp the "image" of Che and other great revolutionaries, but fail to grasp the essence of these people and their teachings. Che, writing in the "General Principals of Guerilla Warfare" said, "Where a government has come into power through some form of popular vote, fraudulent or note, and maintains at least an appearance of constitutional legality, the guerilla outbreak cannot be promoted, since the possibilities of peaceful struggle have not yet been exhausted." But the Weather Underground goes directly counter to Che's principal, and they do it under his banner while shouting his name.

Prairie Fire advocates guerilla warfare, or armed struggle, at a time when there isn't mass support for such action. There is no revolutionary party, not even a powerful or highly visible mass movement. The enemy still maintains the facade (albeit a diminishing one) of constitutionality and legality to the vast majority of people. Such a plan is adventurisitic, kamikaze and based on a fantastic view of where America is really at. It can only lead more people "underground," -- i.e. removed and isolated from the development of mass consciousness through the concrete, everyday organizing activities which much precede armed activity.

WHAT IS TO BE DONE?

Since its beginnings as a politically activist newspaper, the SUN has been pursuing a program which calls for organizing primarily on the local level. Our efforts have been devoted to building a strong local alternative community, one that is capable with time of developing community control of the local and county political aparatus. We urge a plan that calls for the establishment of working alternative institutions which provide for the basic needs of people, while concretely educating them to the contradictions of the present system. We work, as well, to take over and transform existing institutions which have a significant bearing on our daily lives.

We believe a strong political, economic and cultural revolutionary base can be created in Ann Arbor and other similar urban areas of America. These base areas can serve as concrete examples of revolutionary politics in action. They can serve as a grass-roots foundation on which to build a powerful national movement and revolutionary party.

This strategy demands that we develop tactics which do no alienate and isolate us from the people we hope to organize. They demand that we carry out activity in a reasonable and obviously responsible manner, with a positive plan of action based on building, not destruction.

We would be naive and blind to the development of history if we were to deny the need for armed activity at some stage during the revolutionary process. But armed struggle, if it is to survive and succeed, must have the support, if not the active participation of masses of people. To promote armed struggle at this initial stage is a needless waste of beautiful revolutionaries, as the SLA debacle clearly proves.

We wish a long life and safekeeping to the Weather Underground, and the revolution in our lifetime.

for the SUN Editorial Board