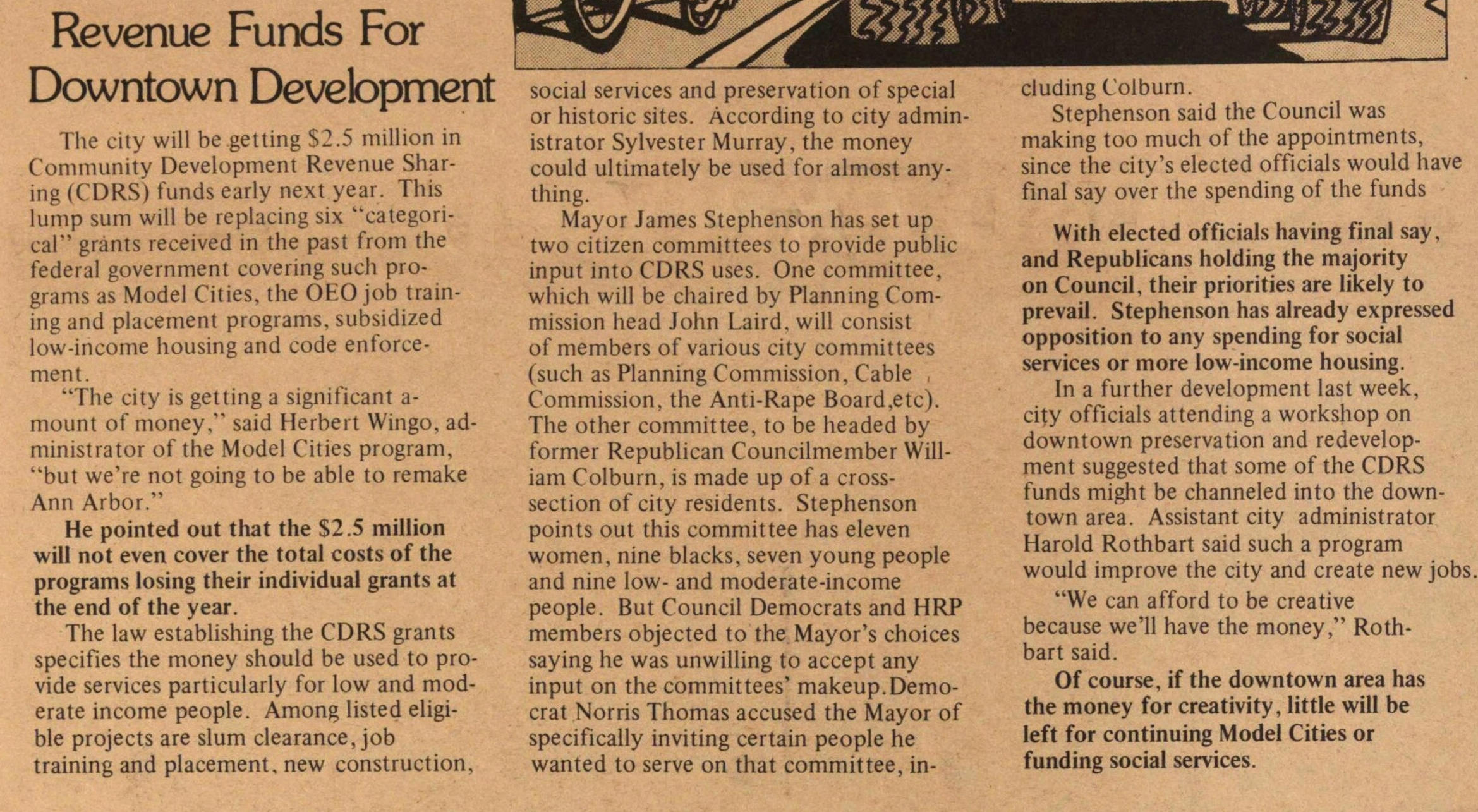 The city will be getting S2.5 million in Community Development Revenue Sharing (CDRS) funds early next year. This lump sum will be replacing six "categórica!" grants received in the past from the federal govemment covering such programs as Model Cities. the OEO job training and placement programs, subsidized low-income housing and code enforcement. "The city is getting a significant amount of money," said Herbei t Wingo, administrator of the Model Cities program. "but we're not going to be able to remake Ann Arbor." He pointed out that the S2.5 million will not even cover the total costs of the programs losing their individual grants at the end of the year. The law establishing the CDRS grants specifies the money should be used to provide services particularly for low and moderate income people. Among listed eligible projects are slum clearance, job training and placement, new construction. social services and preservation of special or historie sites. According to city administrator Sylvester Murray, the money could ultimately be used for almost anything. Mayor James Stephenson has set up two citizen committees to provide public input into CDRS uses. One committee, which will be chaired by Planning Commission head John Laird, will consist of members of various city committees (such as Planning Commission, Cable , Commission, the Anti-Rape Board,etc). The other committee, to be headed by former Republican Councilmember William Colburn, is made up of a crosssection of city residents. Stephenson points out this committee has eleven women, nine blacks, seven young people and nine and moderate-income people. But Council Democrats and HRP members objected to the Mayor's choices saying he was unwilling to accept any input on the committees' makeup.Democrat Norris Thomas accused the Mayor of specifically inviting certain people he wanted to serve on that committee, cludingColburn. Stephenson said the Council was making too much of the appointments, since the city's elected officials would have final say over the spending of the funds With elected officials having final say, and Republicans holding the majority on Council, their priorities are likely to prevail. Stephenson has already expressed opposition to any spending for social services or more low-income housing. In a further development last week, city officials attending a workshop on downtown preservation and redevelopment suggested that some of the CDRS funds might be channeled into the downtown area. Assistant city administrator Harold Rothbart said such a program would improve the city and créate new jobs. "We can afford to be creative because we'll have the money," Rothbart said. Of course, if the downtown área has the money for creativity, little will be left for continuing Model Cities or funding social services.