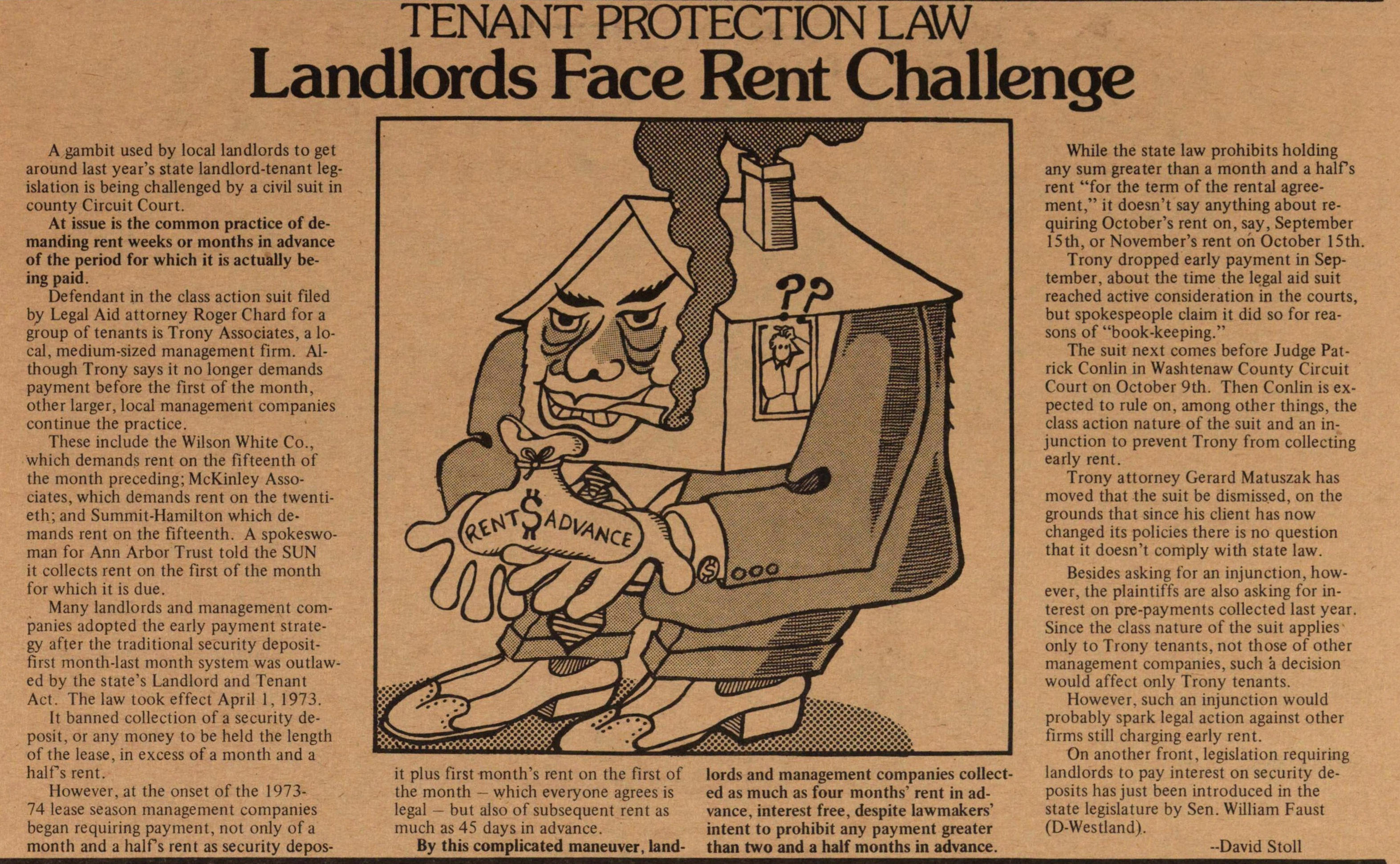 A gambit used by local landlords to get around last year's state landlord-tenant legislation is being challenged by a civil suit in county Circuit Court. At issue is the common practice of demanding rent weeks or months in advance of the period for which it is actuallv being paid. Defendant in the class action suit filed by Legal Aid attorney Roger Chard for a group of tenants is Trony Associates, a local, medium-sized management firm. Although Trony says it no longer demands payment before the first of the montli, other larger, local management companies continue the practice. These include the Wilson White Co., which demands rent on the fifteenth of the month preceding; McKinley Associates, which demands rent on the twentieth; and Summit-Hamilton which demands rent on the fifteenth. A spokeswoman for Ann Arbor Trust told the SUN it collects rent on the first of the month for which it is due. Many landlords and management companies adopted the early payment strategy after the traditional security depositfirst month-last month system was outlawed by the state's Landlord and Tenant Act. The law took effect April 1 , 1973. It banned collection of a security deposit, or any money to be held the length of the lease, in excess of a month and a halfs rent. However, at the onset of the 197374 lease season management companies began requiring payment, not only of a month and a halfs rent as security it plus first month's rent on the first of the month - which everyone agrees is legal - but also of subsequent rent as much as 45 days in advance. By this complicated maneuver, lords and management companies collected as much as four months' rent in advance, interest free, despite lawmakers' intent to prohibit any payment greater than two and a half months in advance. While the state Iaw prohibits holding any sum greater than a month and a halfs rent "for the term of the rental agreement," it doesn't say anything about requiring October's rent on, say, September 15th, or November's rent oh October 15th. Trony dropped early payment in September, about the time the legal aid suit reached active consideration in the courts, but spokespeople claim it did so for reasons of "book -keeping." The suit next comes before Judge Patriek Conlin in Washtenaw County Circuit Court on October 9th. Then Conlin is expected to rule on, among other things, the class action nature of the suit and an injunction to prevent Trony from collecting early rent. Trony attorney Gerard Matuszak has moved that the suit be dismissed, on the grounds that since his cliënt has now changed its policies there is no question that it doesn't comply with state Iaw. Besides asking for an injunction, however, the plaintiffs are also asking for interest on pre-payments collected last year. Since the class nature of the suit applies only to Trony tenants, not those of other management companies, such á decisión would affect only Trony tenants. However. such an injunction would probably spark legal action against other firms still charging early rent. On another front, legislation requiring landlords to pay interest on security deposits has just been introduced in the state legislature by Sen. William Faust (D-Westland),