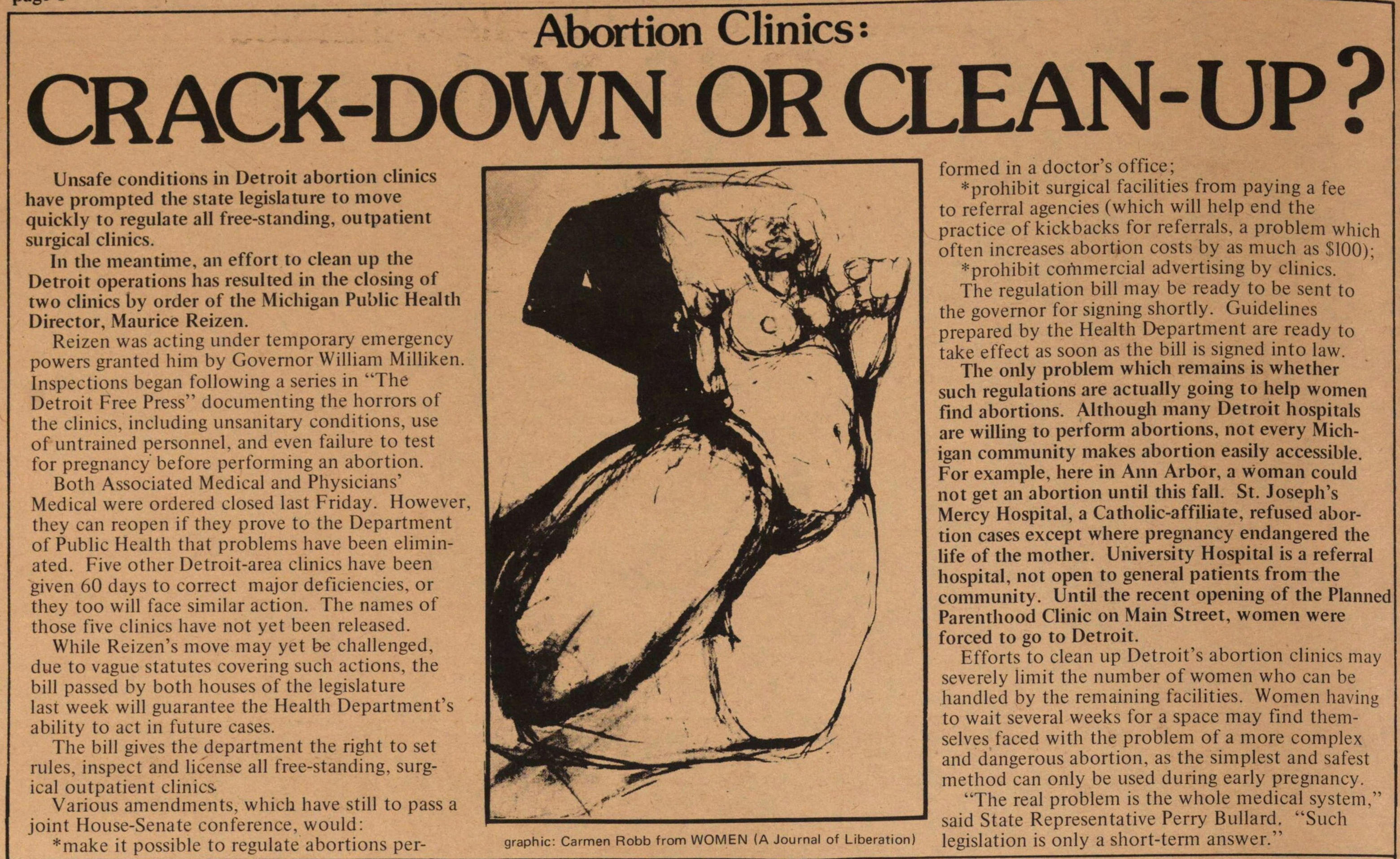 Unsafe conditions in Detroit abortion clinics have prompted the state legisla ture to move quickly to regúlate all free-standing, outpatient surgical clinics. In the meantinie, an effort to clean up the Detroit operations has resulted in the closing of two clinics by order of the Michigan Public Health Director, Maurice Reizen. Reizen was acting under temporary emergency powers granted him by Governor William Milliken. Inspections began following a series in "The Detroit Free Press" documenting the horrors of the clinics. including unsanitary conditions, use of untrained personnel. and even failure to test tbr pregnancy before performing an abortion. Both Associated Medical and Physicians' Medical were ordered closed last Friday. However, they can reopen if they prove to the Department of Public Health that problems have been eliminated. Five other Detroit-area clinics have been given 60 days to correct major deficiencies, or they too will face similar action. The names of those five clinics have not yet been released. While Reizen's move may yet be challenged, due to vague statutes covering such actions, the bill passed by both houses of the legislature last week will guarantee the Health Department's ability to act in future cases. The bill gives the department the right to set rules, inspect and license all free-standing, surgical outpatient clinics Various amendinents, which have still to pass a joint House-Senate conference, would: make it possible to regúlate abortions formed in a doctor's office; prohibit surgical facilities from paying a fee to referral agencies (which will help end the practice of kickbacks for referrals, a problem which often increases abortion costs by as much as S100); prohibit commercial advertising by clinics. The regulation bilí may be ready to be sent to the governor for signing shortly. Guidelines prepared by the Health Department are ready to take effect as soon as the bill is signed into law. The only problem which remains is whether such regulations are actually going to help women find abortions. Althougli many Detroit hospitals are willing to perform abortions, not every Michigan community makes abortion easily accessible. For example, here in Ann Arbor, a w ornan could not get an abortion until this fall. St. Joseph's Mercy Hospital, a Catholic-affiliate, refused abortion cases except where pregnancy endangered the life of the mother. University Hospital is a referral hospital, not open to general patients from the community. Until the recent opening of the Planned Parenthood Clinic on Main Street, women were forced to go to Detroit. Efforts to clean up Detroit's abortion clinics may severely limit the number of women who can be handled by the remaining facilities. Women having to wait several weeks for a space may find themselves faced with the problem of a more complex and dangerous abortion. as the simplest and safest method can only be used during early pregnancy. "The real problem is the whole medical systeni." said State Representative Perry Bullard. "Such legislation is only a short-term answer."