God Dwells Within You Baba Muktananda 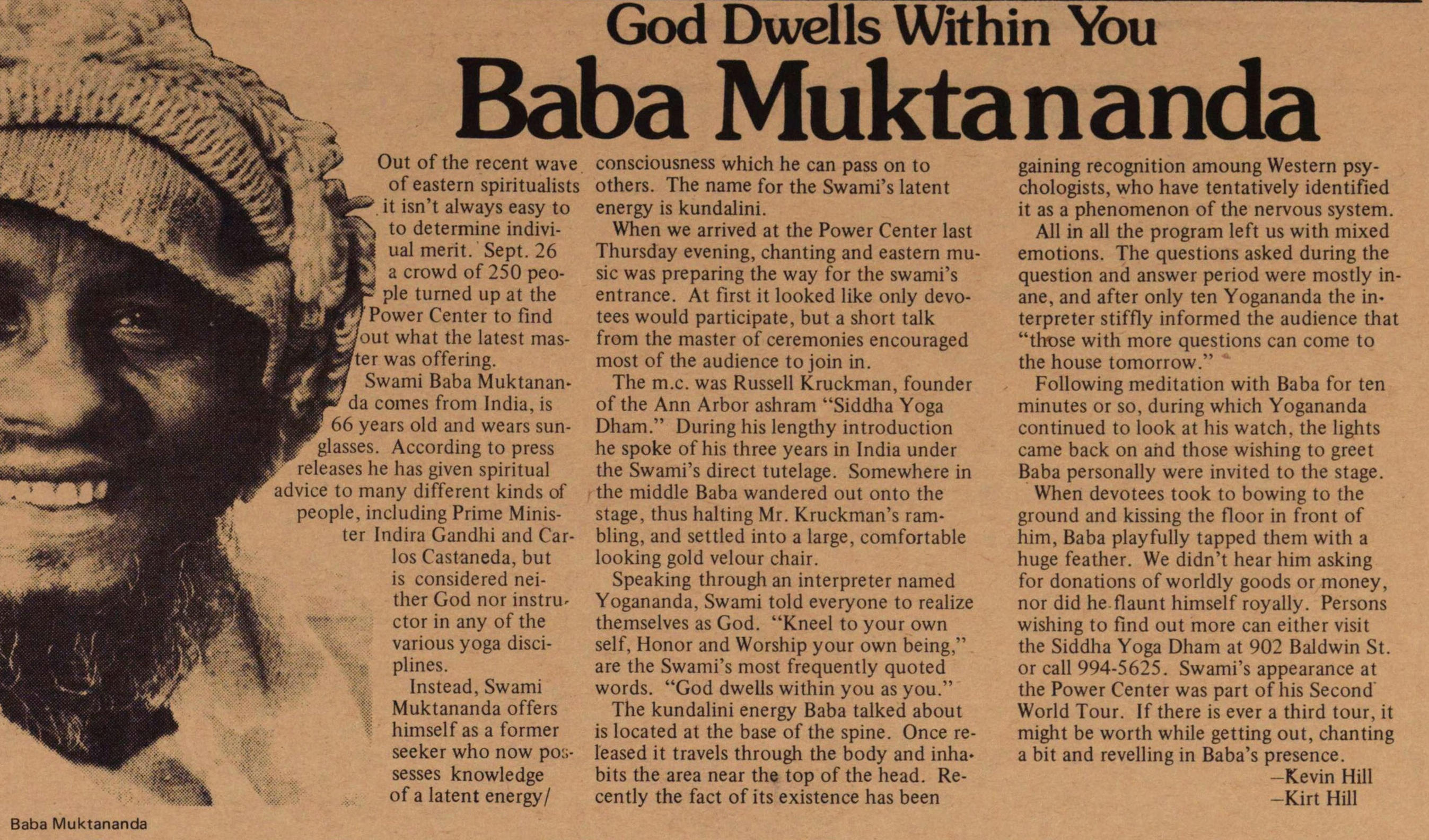 Out of the recent wave of eastern spiritualists . it isn't always easy to to determine j ual merit. Sept. 26 j a crowd of 250 people turnecl up at the Power Center to find out what the latest master was offering. maf Swami Baba MuktananW da comes from India, is 66 years old and wears Jf glasses. According to press releases he lias given spiritual advice to many different kinds of people, including Prime ter Indira Gandhi and Carlos Castañeda, but is considered neither God nor instructor in any of the various yoga disciplines. Instead, Swami Muktananda offers himself as a former seeker who now po:;sesses knowledge of a latent energy consciousness which he can pass on to others. The name for the Swami's latent energy is kundalini. When we arrived at the Power Center last Thursday evening, chanting and eastern music was preparing the way for the swami's entrance. At first it looked like only devotees would particípate, but a short talk from the master of ceremonies encouraged most of the audience to join in. The m.c. was Russell Kruckman, founder of the Ann Arbor ashram "Siddha Yoga Dham." During his lengthy introduction he spoke of his three years in India under the Swami's direct tutelage. Somewhere in the middle Baba wandered out onto the stage, thus halting Mr. Kruckman's rambling, and settled into a large, comfortable looking gold velour chair. Speaking through an interpreter named Yogananda, Swami told everyone to realize themselves as God. "Kneel to your own self, Honor and Worship your own being," are the Swami's most frequently quoted words. "God dwells within you as you." The kundalini energy Baba talked about is located at the base of the spine. Once released it travels through the body and inhabits the area near the top of the head. Recently the fact of its existence has been gaining recognition amoung Western psychologists, who have tentatively identified it as a phenomenon of the nervous system. All in all the program left us with mixed emotions. The questions asked during the question and answer period were mostly inane, and after only ten Yogananda the interpreter stiffly informed the audience that "those with more questions can come to the house tomorrow." Following meditation with Baba for ten minutes or so, during which Yogananda continued to look at his watch, the lights carne back on and those wishing to greet Baba personally were invited to the stage. When devotees took to bowing to the ground and kissing the floor in front of him, Baba playfully tapped them with a huge feather. We didn't hear him asking for donations of worldly goods or money, nor did he flaunt himself royally. Persons wishing to find out more can either visit the Siddha Yoga Dham at 902 Baldwin St. or cali 994-5625. Swami's appearance at the Power Center was part of his Second World Tour. If there is ever a third tour, it might be worth while getting out, chanting a bit and revelling in Baba's presence.