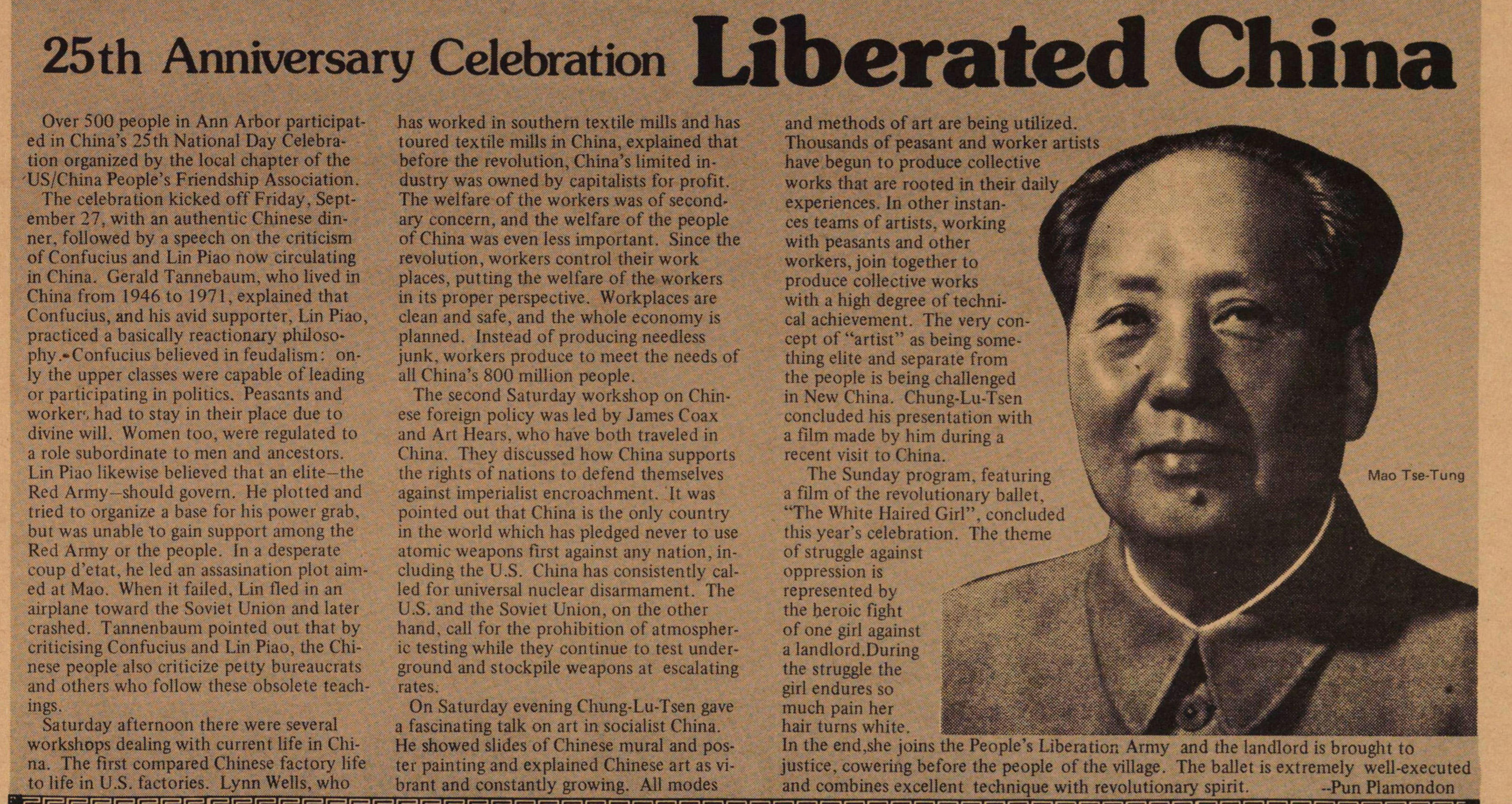 Over 500 people in Ann Arbor participated in China's 25th National Day Celebration organized by the local chapter of the US/China People's Friendship Association.

The celebration kicked off Friday, September 27, with an authentic Chinese dinner, followed by a speech on the criticism of Confucius and Lin Piao now circulating in China. Gerald Tannebaum, who lived in China from 1946 to 1971, explained that Confucius, and his avid supporter, Lin Piao, practiced a basically reactionary philosophy-Confucius believed in feudalism: only the upper classes were capable of leading or participating in politics. Peasants and workers had to stay in their place due to divine will. Women too, were regulated to a role subordinate to men and ancestors. Lin Piao likewise believed that an elite- the Red Army- should govern. He plotted and tried to organize a base for his power grab, but was unable to gain support among the Red Army or the people. In a desperate coup d'etat, he led an assassination plot aimed at Mao. When it failed, Lin fled in an airplane toward the Soviet Union and later crashed. Tannenbaum pointed out that by criticising Confucius and Lin Piao, the Chinese people also criticize petty bureaucrats and others who follow these obsolete teachings.

Saturday afternoon there were several workshops dealing with current life in China. The first compared Chinese factory life to life in U.S. factories. Lynn Wells, who has worked in southern textile mills and has toured textile mills in China, explained that before the revolution, China's limited industry was owned by capitalists for profit. The welfare of the workers was of secondary concern, and the welfare of the people of China was even less important. Since the revolution, workers control their work places, putting the welfare of the workers in its proper perspective. Workplaces are clean and safe, and the whole economy is planned. Instead of producing needless junk, workers produce to meet the needs of all China's 800 million people.

The second Saturday workshop on Chinese foreign policy was led by James Coax and Art Hears, who have both traveled in China. They discussed how China supports the rights of nations to defend themselves against imperialist encroachment. It was pointed out that China is the only country in the world which has pledged never to use atomic weapons first against any nation, including the U.S. China has consistently called for universal nuclear disarmament. The U.S. and the Soviet Union, on the other hand, call for the prohibition of atmospheric testing while they continue to test underground and stockpile weapons at escalating rates.

On Saturday evening Chung-Lu-Tsen gave a fascinating talk on art in socialist China. He showed slides of Chinese mural and poster painting and explained Chinese art as vibrant and constantly growing. All modes and methods of art are being utilized. Thousands of peasant and worker artists have begun to produce collective works that are rooted in their daily experiences. In other instances teams of artists, working with peasants and other workers, join together to produce collective works with a high degree of technical achievement. The very concept of "artist" as being something elite and separate from the people is being challenged in New China. Chung-Lu-Tsen concluded his presentation with a film made by him during a recent visit to China.

The Sunday program, featuring a film of the revolutionary ballet, "The White Haired Girl", concluded this year's celebration. The theme of struggle against oppression is represented by the heroic fight of one girl against a landlord. During the struggle the girl endures so much pain her hair turns white. In the end, she joins the People's Liberation Army and the landlord is brought to justice, cowering before the people of the village. The ballet is extremely well-executed and combines excellent technique with revolutionary spirit.