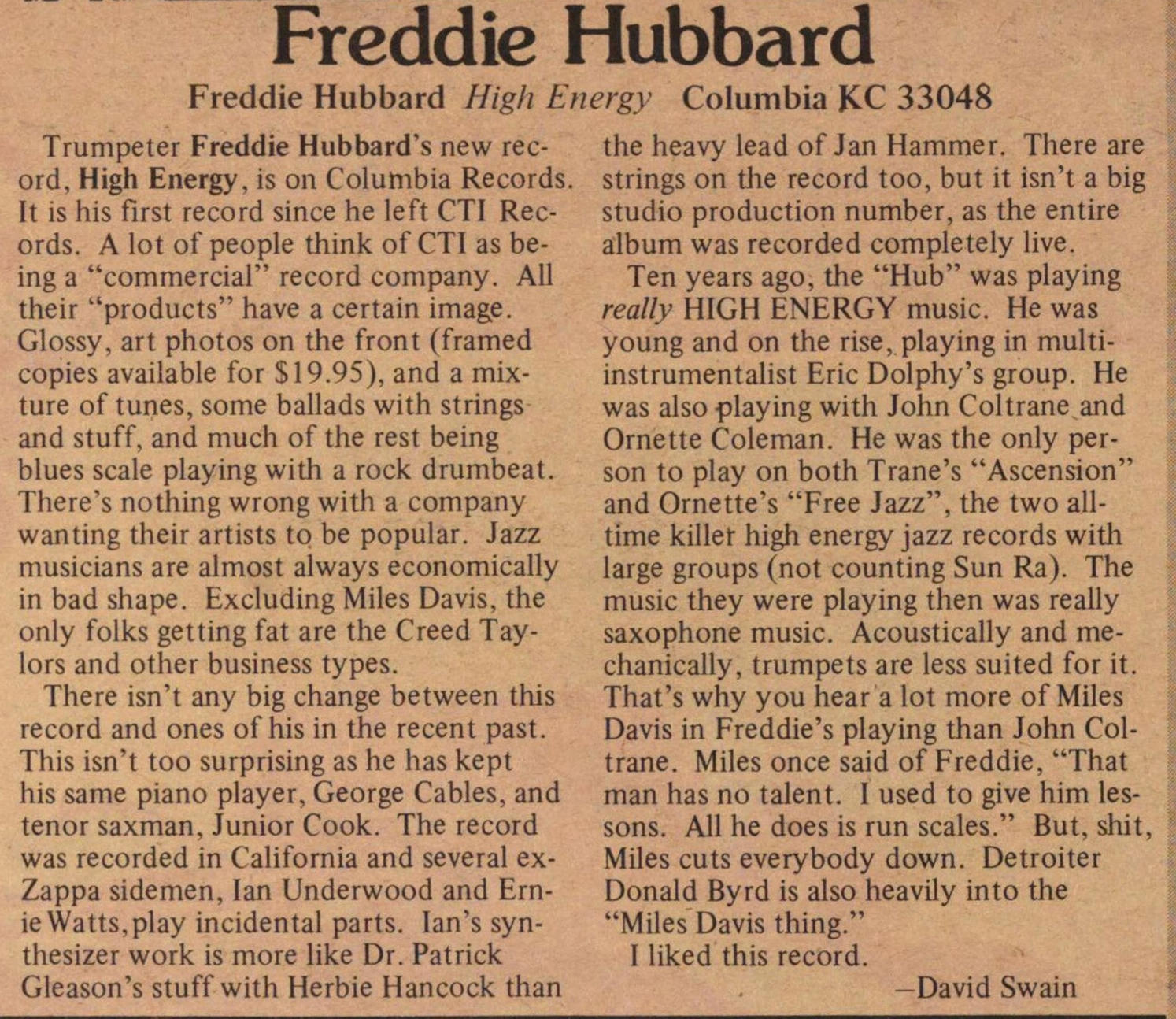 Trumpeter Freddie Hubbard's new record. High Energy, is on Columbia Records. It is his first record since he left CTI Records. A lot of people think of CTI as being a "commercial" record company. All their "products" have a certain image. Glossy, art photos on the front (framed copies available for SI 9.95), and a mixture of tunes, some ballads with strings and stuff, and much of the rest being blues scale playing with a rock drumbeat. There's nothing wrong with a company wanting their artists tq be popular. Jazz musicians are almost always economically in bad shape. Excluding Miles Davis, the only folks getting fat are the Creed Taylors and other business types. There isn't any big change between this record and ones of his in the recent past. This isn't too surprising as he has kept his same piano player, George Cables, and tenor saxman, Junior Cook. The record was recorded in California and several exZappa sidemen, Ian Underwood and Ernie Watts, play incidental parts. Ian's synthesizer work is more like Dr. Patrick Gleason's stuff with Herbie Hancock than the heavy lead of Jan Hammer. There are strings on the record too, but it isn't a big studio production number, as the entire album was recorded completely live. Ten years ago, the "Hub" was playing really HIGH ENERGY music. He was young and on the rise, playing in multiinstrumentalist Eric Dolphy's group. He was also playing with John Coltrane and Ornette Coleman. He was the only person to play on both Trane's "Ascensión" and Ornette's "Free Jazz", the two alltime killer high energy jazz records with large groups (not counting Sun Ra). The music they were playing then was really saxophone music. Acoustically and mechanically, trumpets are less suited for it. That's why you hear a lot more of Miles Davis in Freddie's playing than John Coltrane. Miles once said of Freddie, "That man has no talent. I used to give him lessons. All he does is run scales." But, shit, Miles cuts everybody down. Detroiter Donald Byrd is also heavily into the "Miles Davis thing." I liked this record.