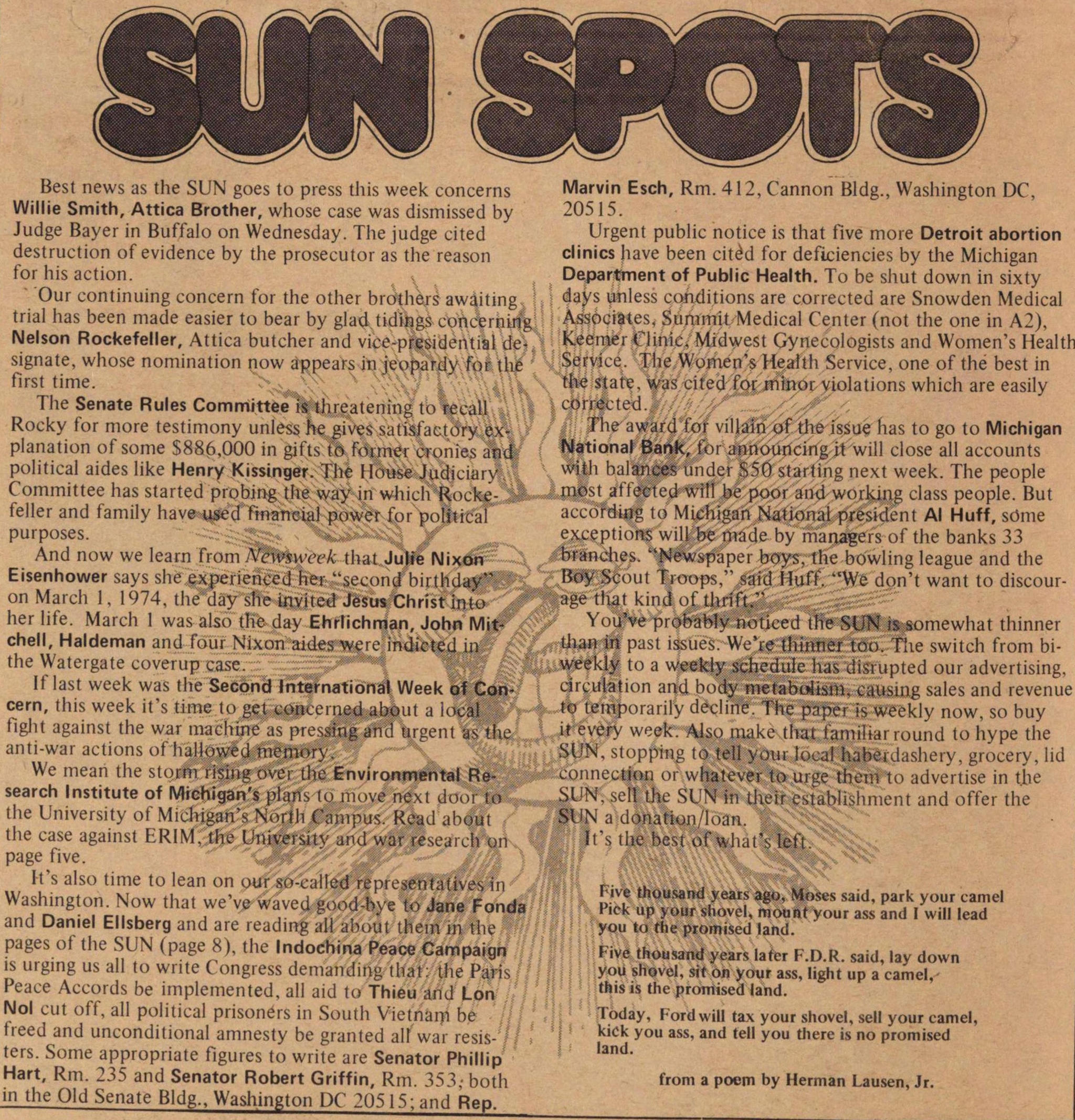 Besl news as the SUN goes to press this week concerns WMlie Smith, Attica Brother, whose case was dismissed by Judge Bayer in Buffalo on Wednesday. The judge cited destruction of evidence by the prosecutor as the reason for hisaction. Our continuing concern for the other brötheis awáiting trial has been made easier to bear by glad tidings eoncerning Nelson Rockefeller, Attica butcher and vice-pijisideiuial de., signate, whose nomination now appears in ieopardv for thé firsttime. ' ..VK The Senate Rules Committee is threatening tb recall ,, % Rocky for more testimony unless he Lives satisfactory explanation of some $886,000 in gifts to förmer cronies and political aides like Henry Kissinger. The House Judiciary . Committee has started probing llie way in whicli Rockefeller and family haveysed financia! power for political purposes. 52sS -jiwisö Jf And now we learn from Ncvnwcek that Julfe Nixon Eisenhower says she experienced her "second birthday" on March 1 , 1974, the day she invitet! Jesús Christinto her life. March 1 was also the day Ehrtichman, John Mitchell, Haldeman and four Nixon aides "we re inéictetl in the Watergate coverup case. If last week was the Second International Week of Concern, this week it's time to ge,t concerned about a ocal figlit against the war machine as pressing and urgent as the anti-war actions of hallowèd memor . We mean the storm rij'mgover the Environmental Research Institute of Michigan's plans to move next door to the University of Michigan's North Campus. Read about the case against ERIM, the University and war research on page five. h's also time to lean on our so-calted represenlatives in Washington. Now that we've waved good-bye to Jane Fonda and Daniel Ellsberg and are reading all about them in the pages of the SUN (page 8), the Indochina Peace Campaign is urging us all to write Congress demanding that: the Paris Peace Accords be implemented, all aid to Thieu and Lon Nol cut off, all political prisonérs in South Vietnam be freed and unconditional amnesty be granted air war résisters. Some appropriate figures to write are Senator Phillip Hart, Rm. 235 and Senator Robert Griffin, Rm. both in the Old Senate Bldg., Washington PC 205 15; and Rep. Marvin Esch, Rm. 412,Cannon Bldg., Washington DC 20515. Urgent public notice is that five more Detroit abortion clinics have been citèd for deficiencies by the Michigan Department of Public Health. To be shut down in sixty days unless conditions are corrected are Snowden Medical Associates. Summit Medical Center (not the one in A2). Keemei Clinic, Midwest Gynecologists and Women's Health Service. The Women's Heafth Service, one of thé best in the state, was ciled for minor violations which are easily corrected. The award for villaln of Üie issue lias to go to Michigan National Bank, for announcing it will close all accounts with balances under $50 starting next week. The people most atïected wifl be poor and werking class people. But accordiag to Michigan National president Al Huff, söme exceptions willbe made by managers of the banks 33 branclies. "Nèwspaper boys, the bowling league and the Btfy Scout Troops," said Huff. "Wè don't want to discourage that kind of tlirift.". You've probaWy noticed thVSUN is somewhat thinner üia in past issues. We're thinner too. T'ie switch from bi. weekly to a weefcly schedule has disrupted our advertising, circulation and body metaboiism, causing sales and revenue to temporarily decline. The paper s weekly now, so buy if every week. Also niake that familiar round to hype the SUN, stopping to teil your local haberdashery, grocery, lid connectíon or vvhatever to urge them to advertise in t.he SUN. setl the SUN in their establishment and offer the SUN a donathaiIoan. iif Five thousand years ago, Moses said, park your camel l'ick up your shovel, rnount your ass and I will lead you to the promised land. five thousand years lafer F.D.R. said, lay down you shovel, sit on your ass, light up a camel, - this is the proniised land. Today, Ford will tax your shovel, sell your camel, kick you ass, and teil you tliere is no promised land. from a poem by Herman Lausen, Jr.