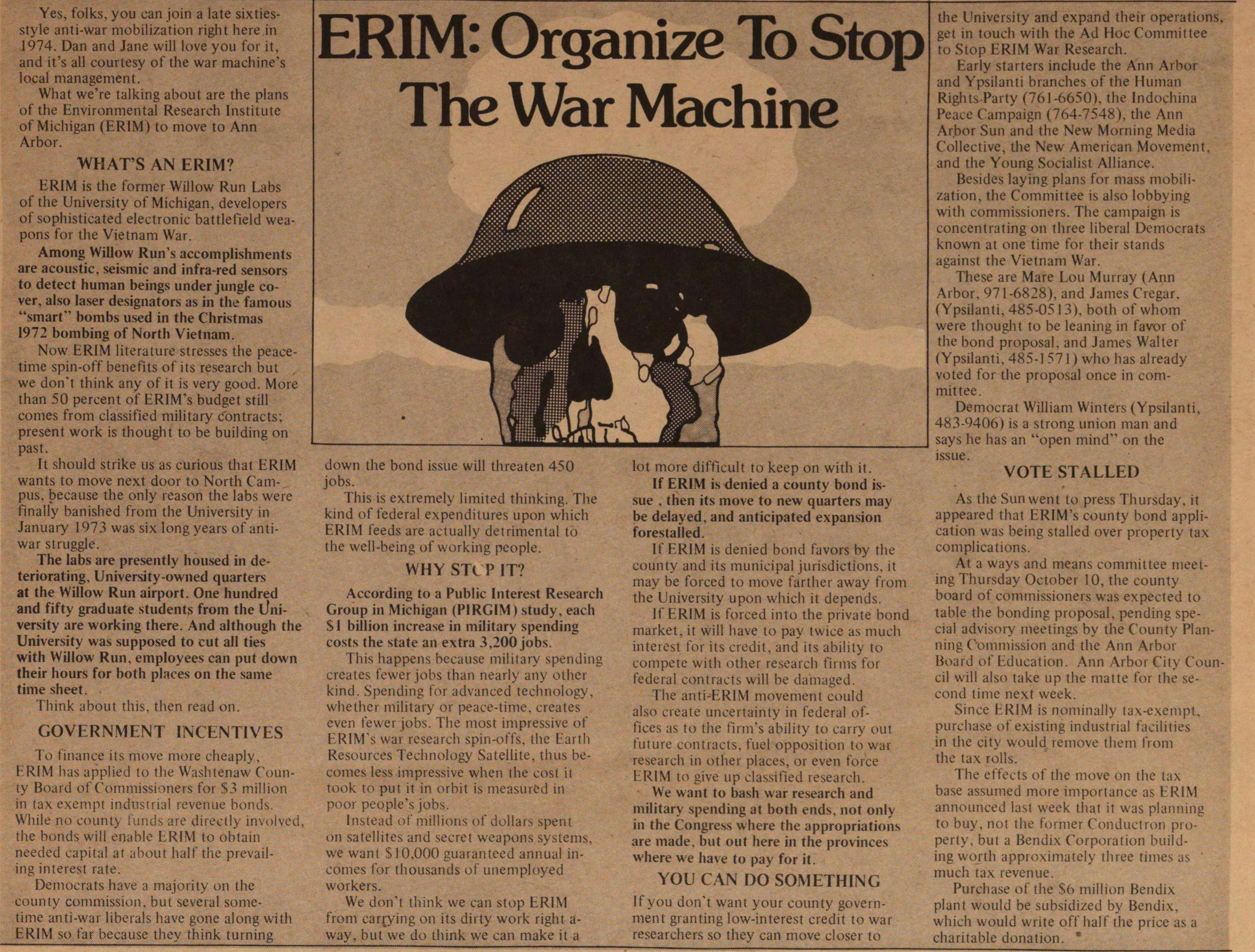 Yes, foiks, you can join a late sixtiesstyle anti-war mobilization right here ín 1 974. Dan and Jane wil] love you for it. and it's all courtesy of the war machine's local management. What we're talking about are the plans of the Environmental Research Institute of Michigan (ERIM) to move to Ann Arbor. "WHAT'S AN ERIM? ERIM is the former Willow Run Labs of the University of Michigan, developers of sophisticated electronic battlefield weapons for the Vietnam War. Among WiUow Run's accomplishments are acoustic, seismic and infra-red sensors to detect human beings under jungle cover, also laser designators as in the famous "smart" bombs used in the Christmas 1972 bombing of North Vietnam. Now ERIM literature stresses the peacetime spin-off benefits of its research hut we don't think any of il is very goud. More than 50 percent of ERlM's budget still comes from classified military ciontracts; present work is thought to be building on past. ït should strike us as curious thut ERIM wants to move next door to North Campus, because the only reason the labs were finally banished from the University in January 1973 was six long years of antiwar struggle. The labs are presently housed in deteriorating, University -owned quarters at the Willow Run airport. One hundred and fifty gradúate students from the University are working there. And although the University was supposed to cut all ties with Wülow Run, employees can put down their hours for both places on the same time sheet. Think aboui this, then read on. GOVERNMENT INCENTIVES To finance its move more cheaply, ERIM lias appiied to the Washtenaw County Board ot Commissioners for $3 million in (a exempl industrial revenue honds. VVhile nu county funds are direct I v involved, the bonds will enable ERIM to obtam needed capital at about half the prevailing interes! rak'. Democrats have ;i majority on the county commission, hui severa! sometinie anti-war liberáis have gone along wilh ERIM so far because they think turning down the bond issue will threaten 450 jobs. This is extremely limited thinking. Tlie kind of federal expenditures upon which ERIM i'eeds are actualiy detrimental to the well-being of working pcople. WHYSTVPIT? According to a Public Interest Research Group in Michigan (PIRGIM) study, each Si billion increase in military spending costs the state an extra 3,200 jobs. This happens bceause military spending creutes fewerjobs than nearly any other kind. Spending lor advanced technology, whethcr military or peace-time. creates even fewei jobs. The most impressive of I RIM's war research spin-otïs. ihc Earth Resources Technology Satellite, thus becomes less impressive when the cos) ii took to put it in orbit is measurêd in poor people's jobs. Instead of millions of dollars spent on satellites and secret weapons systems, we want SIO.ÜOO guaranteed annual incomes lor thousands of unemployed workers. We don't think we can stop ERIM from caqying on its dirty work rigiit away, but we do think we can make it a lot more difficult to keep on with it. If E: RIVI is denied a county bund issue , then its move to new quarters may be delayed, and anticipated expansión forestalled. It" ERIM is denied bond favors by the county and ils municipal jurisdictíons, it may be torced to move fsrther away from the University upon which it depends. If ERIM is forced into the private bond market, it will have to pay twice as much interest for its credit, and ils ability to compete with other research flnns for federal contracts will be damaged. The anti-HRIM movement could also créate uncertainty in federal offices as to the tlnn's ability to carry out future contracts, fuej opposition to war research in other places, or even torce ERIM to give up classified research. ■ We want to bash war research and military spendingat both ends. nol only n the Congress vvhere the appropriations are made. hut out here in the provinces where we have to pay for it. YOU CAN DO SOMETHING If you don't want your county government granting low-interest credit to war researchere so they can move closer to the University and expand their operations. get in touch with the Ad Hoc ('ommittee lo Stop ERIM War Research. Kariy starters include the Ann Arbor and Ypsilanti branches of the Human Rights Party (761-6650), the Indochina Peace Campaign (764-7548). the Ann Arbor Sun and the New Morning Media ('ollecttve, the New American Movement. and the Young Socialist Alliance. Besides laying plans for mass mobilization, the Committee is also lobbying with commissioners. The campaign is concentrating on three liberal Demócrata known at one time for their stands against the Vietnam War. These are Mare Lou Murray (Ann Arbor. 97 1 -6828), and James Cregar, (Ypsilanti, 485-05 13), both of whom were thouglit to be leaning in favor of the bond proposal, and James Walter (Ypsilanti, 485-1571 ) who has already voted for the proposal once in committee. Democrat William Winters (Ypsilanti, 483-9406) is a strong tinion man and says he has an "open mind" on the issue. VOTE STALLED As the Sun went to press Thursday, it appeared that ERIM's county bond application was being stalled over property ta complications. At a ways and means committee meeting Thursday October 10, the county board ot commissioners was expected to table the bonding proposal, pending special advisory meetings by the County Planning Commission and the Ann Arbor Board ot' Education. Ann Arbor City Council will also take up the matte for the second time next week. Since hRIM is nominally tax-exempt. purchase of existing industrial facitities in the city would remove tliem from the tax rolls. The effects of the move on the tax base assumed more importance as l RIM announced last week that it was planning to buy, nol the Tonner Conductron property. hut a Bendix Corporation building worth approximately three times as much tax revenue. Purchase of the $6 miliion Bendix plant would be subsidized by Bendix. which would write off half the price as a charitable donation.