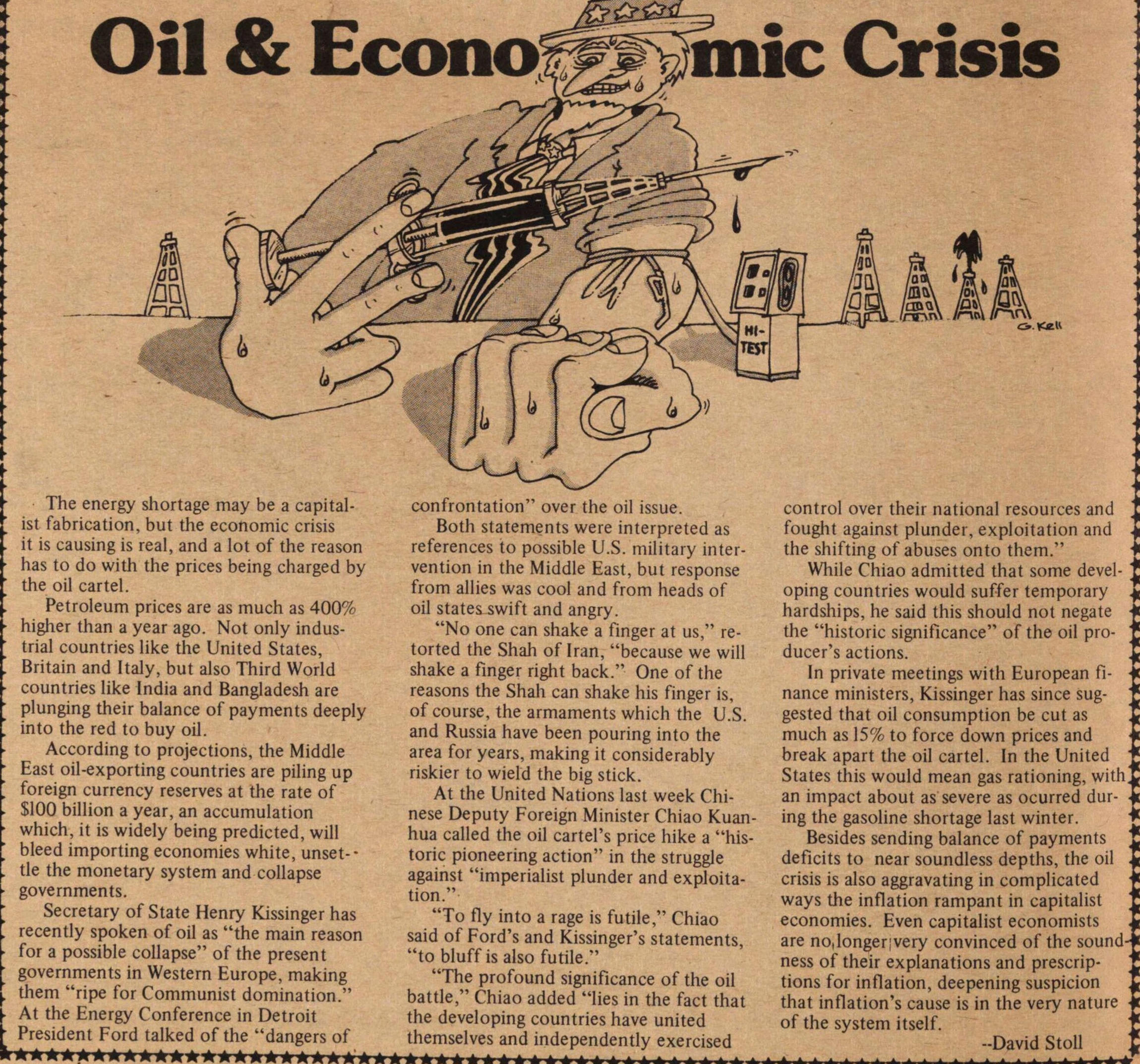 The energy shortage may be a capitalist fabrication, but the economic crisis it is causing is real, and a lot of the reason has to do with the prices being charged by the oil cartel.

Petroleum prices are as much as 400% higher than a year ago. Not only industrial countries like the United States, Britain and Italy, but also Third World countries like India and Bangladesh are plunging their balance of payments deeply into the red to buy oil.

According to projections, the Middle East oil-exporting countries are piling up foreign currency reserves at the rate of $100 billion a year, an accumulation which, it is widely being predicted, will bleed importing economies white, unsettle the monetary system and collapse governments.

Secretary of State Henry Kissinger has recently spoken of oil as "the main reason for a possible collapse" of the present governments in Western Europe, making them "ripe for Communist domination." At the Energy Conference in Detroit President Ford talked of the "dangers of confrontation" over the oil issue.

Both statements were interpreted as references to possible U.S. military intervention in the Middle East, but response from allies was cool and from heads of oil states swift and angry.

"No one can shake a finger at us," retorted the Shah of Iran, "because we will shake a finger right back." One of the reasons the Shah can shake his finger is, of course, the armaments which the U.S. and Russia have been pouring into the area for years, making it considerably riskier to wield the big stick.

"To fly into a rage is futile," Chiao said of Ford's and Kissinger's statements, "to bluff is also futile."

"The profound signifïcance of the oil battle," Chiao added "lies in the fact that the developing countries have united themselves and independently exercised control over their national resources and fought against plunder, exploitation and the shifting of abuses onto them."

While Chiao admitted that some developing countries would suffer temporary hardships, he said this should not negate the "historic significance" of the oil producer's actions.

In private meetings with European finance ministers, Kissinger has since suggested that oil consumption be cut as much as 15% to force down prices and break apart the oil cartel. In the United States this would mean gas rationing, with an impact about as severe as ocurred during the gasoline shortage last winter.

Besides sending balance of payments deficits to near soundless depths, the oil crisis is also aggravating in complicated ways the inflation rampant in capitalist economies. Even capitalist economists are no longer very convinced of the soundness of their explanations and prescriptions for inflation, deepening suspicion that inflation's cause is in the very nature of the system itself.