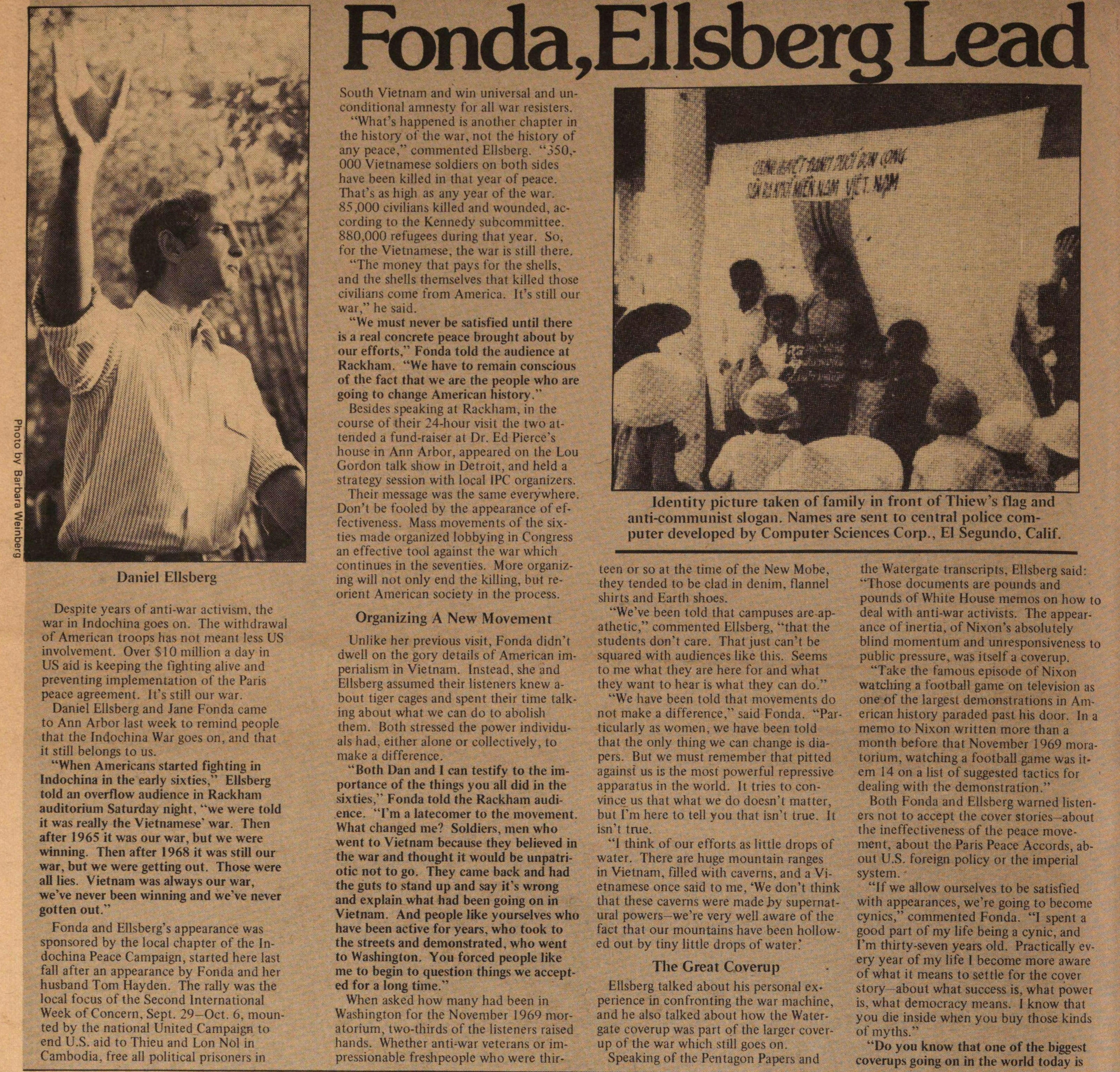 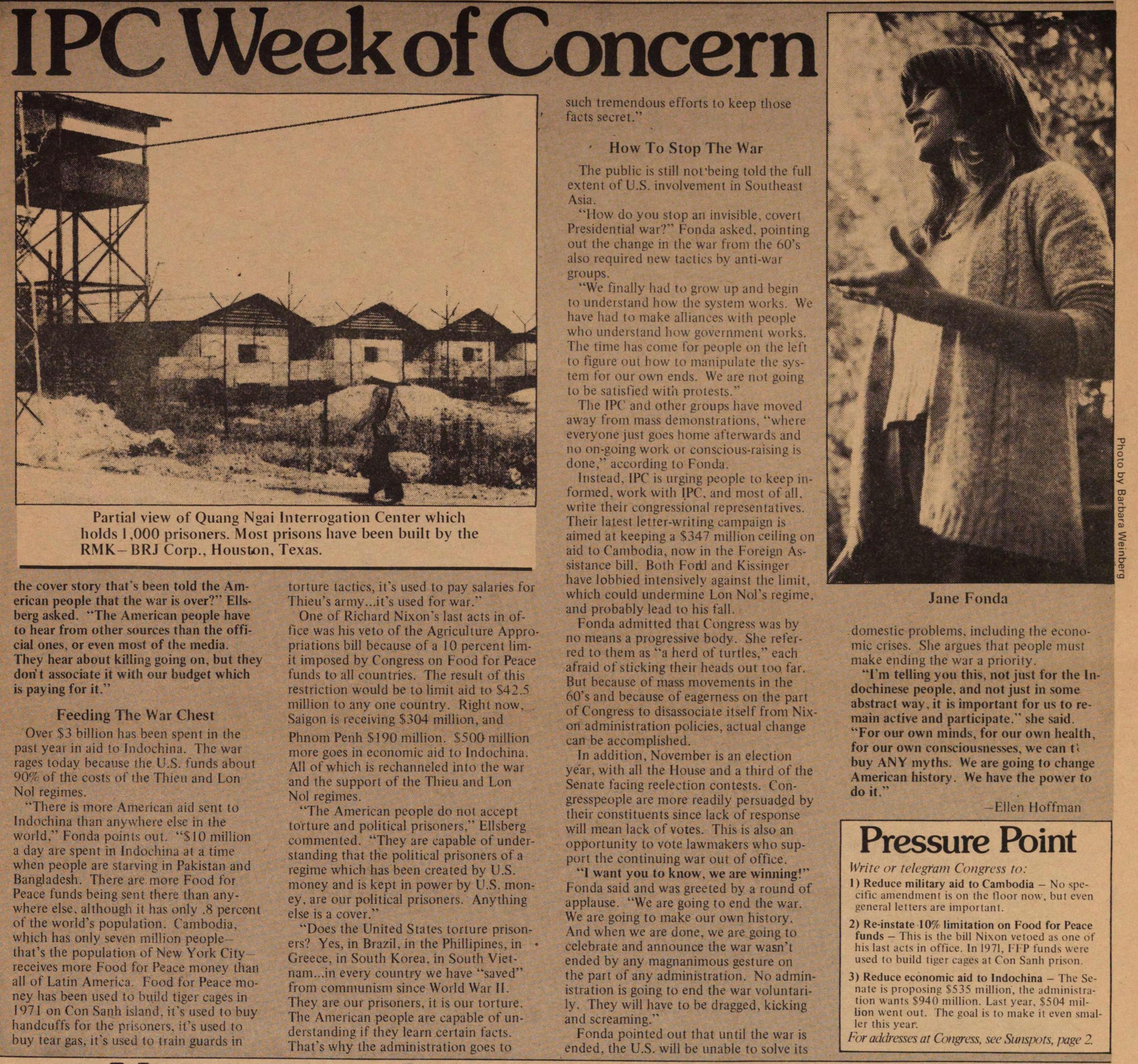 Despite years of anti-war activism, the war in Indochina goes on. The withdrawal of American troops has not meant less US involvement. Over $10 million a day in US aid is keeping the fighting alive and preventing implementation of the Paris peace agreement. It's still our war.

Daniel Ellsberg and Jane Fonda came to Ann Arbor last week to remind people that the Indochina War goes on, and that it still belongs to us.

"When Americans started fighting in Indochina in the early sixties," Ellsberg told an overflow audience in Rackham auditorium Saturday night, "we were told it was really the Vietnamese' war. Then after 1965 it was our war, but we were winning. Then after 1968 it was still our war, but we were getting out. Those were all lies. Vietnam was always our war, we've never been winning and we've never gotten out."

Fonda and Ellsberg's appearance was sponsored by the local chapter of the Indochina Peace Campaign, started here last fall after an appearance by Fonda and her husband Tom Hayden. The rally was the local focus of the Second International Week of Concern, Sept. 29-Oct. 6, mounted by the national United Campaign to end U.S. aid to Thieu and Lon Nol in Cambodia, free all political prisoners in South Vietnam and win universal and unconditional amnesty for all war resisters.

"What's happened is another chapter in the history of the war, not the history of any peace," commented Ellsberg. "350,000 Vietnamese soldiers on both sides have been killed in that year of peace. That's as high as any year of the war. 85,000 civilians killed and wounded, according to the Kennedy subcommittee 880,000 refugees during that year. So, for the Vietnamese, the war is still there.

"The money that pays for the shells, and the shells themselves that killed those civilians come from America. It's still our war," he said.

"We must never be satisfied until there is a real concrete peace brought about by our efforts," Fonda told the audience at Rackham. "We have to remain conscious of the fact that we are the people who are going to change American history."

Besides speaking at Rackham, in the course of their 24-hour visit the two attended a fund-raiser at Dr. Ed Pierce's house in Ann Arbor, appeared on the Lou Gordon talk show in Detroit, and held a strategy session with local IPC organizers.

Their message was the same everywhere. Don't be fooled by the appearance of effectiveness. Mass movements of the sixties made organized lobbying in Congress an effective tool against the war which continues in the seventies. More organizing will not only end the killing, but reorient American society in the process.

Unlike her previous visit, Fonda didn't dwell on the gory details of American imperialism in Vietnam. Instead, she and Ellsberg assumed their listeners knew about tiger cages and spent their time talking about what we can do to abolish them. Both stressed the power individuals had, either alone or collectively, to make a difference.

"Both Dan and I can testify to the importance of the things you all did in the sixties," Fonda told the Rackham audience. "I'm a latecomer to the movement. What changed me? Soldiers, men who went to Vietnam because they believed in the war and thought it would be unpatriotic not to go. They came back and had the guts to stand up and say it's wrong and explain what had been going on in Vietnam. And people like yourselves who have been active for years, who took to the streets and demonstrated, who went to Washington. You forced people like me to begin to question things we accepted for a long time."

When asked how many had been in Washington for the November 1969 moratorium, two-thirds of the listeners raised hands. Whether anti-war veterans or impressionable freshpeople who were thirteen or so at the time of the New Mobe, they tended to be clad in denim, flannel shirts and Earth shoes.

"We've been told that campuses are apathetic," commented Ellsberg, "that the students don't care. That just can't be squared with audiences like this. Seems to me what they are here for and what they want to hear is what they can do."

"We have been told that movements do not make a difference," said Fonda. "Particularly as women, we have been told that the only thing we can change is diapers. But we must remember that pitted against us is the most powerful repressive apparatus in the world. It tries to convince us that what we do doesn't matter, but I'm here to tell you that isn't true. It isn't true.

"I think of our efforts as little drops of water. There are huge mountain ranges in Vietnam, filled with caverns, and a Vietnamese once said to me, 'We don't think that these caverns were made by supernatural powers--we're very well aware of the fact that our mountains have been hollowed out by tiny little drops of water.'

Ellsberg talked about his personal experience in confronting the war machine, and he also talked about how the Watergate coverup was part of the larger coverup of the war which still goes on.

Speaking of the Pentagon Papers and the Watergate transeripts, Ellsberg said: "Those documents are pounds and pounds of White House memos on how to deal with anti-war activists. The appearance of inertia, of Nixon's absolutely blind momentum and unresponsiveness to public pressure, was itself a coverup.

Both Fonda and Ellsberg warned listeners not to accept the cover stories--about the ineffectiveness of the peace movement, about the Paris Peace Accords, about U.S. foreign policy or the imperial system.

"If we allow ourselves to be satisfied with appearances, we're going to become cynics," commented Fonda. "I spent a good part of my life being a cynic, and I'm thirty-seven years old. Practically every year of my life I become more aware of what it means to settle for the cover story about what success is, what power is, what democracy means. I know that you die inside when you buy those kinds of myths."

"Do you know that one of the biggest coverups going on in the world today is the cover story that's been told the American people that the war is over?" Ellsberg asked. "The American people have to hear from other sources than the official ones, or even most of the media. They hear about killing going on, but they don't associate it with our budget which is paying for it."

Over $3 billion has been spent in the past year in aid to Indochina. The war rages today because the U.S. funds about 90% of the costs of the Thieu and Lon Nol regimes.

"There is more American aid sent to Indochina than anywhere else in the woríd," Fonda points out. "$10 million a day are spent in Indochina at a time when people are starving in Pakistan and Bangladesh. There are more Food for Peace funds being sent there than anywhere else, although it has only .8 percent of the world's population. Cambodia, which has only seven million people--that's the population of New York City--receives more Food for Peace money than all of Latin America. Food for Peace money has been used to build tiger cages in 1971 on Con Sanh island, it's used to buy handcuffs for the prisoners, it's used to buy tear gas, it's used to train guards in torture tactics, it's used to pay salaries for Thieu's army...it's used for war."

One of Richard Nixon's last acts in office was his veto of the Agriculture Appropriations bill because of a 10 percent limit imposed by Congress on Food for Peace funds to all countries. The result of this restriction would be to limit aid to $42.5 million to any one country. Right now, Saigon is receiving $304 million, and Phnom Penh $190 million. $500 million more goes in economic aid to Indochina. All of which is rechanneled into the war and the support of the Thieu and Lon Nol regimes.

"Does the United States torture prisoners? Yes, in Brazil, in the Phillipines, in Greece, in South Korea, in South Vietnam...in every country we have "saved" from communism since World War II. They are our prisoners, it is our torture. The American people are capable of understanding if they learn certain facts. That's why the administration goes to such tremendous efforts to keep those facts secret."

How To Stop The War

The public is still not being told the full extent of U.S. involvement in Southeast Asia.

"How do you stop an invisible, covert Presidential war?.'" Fonda asked, pointing out the change in the war from the 60's also required new tactics by anti-war groups.

"We finally had to grow up and begin to understand how the system works. We have had to make alliances with people who understand how government works. The time has come for people on the left to figure out how to manipulate the system for our own ends. We are not going to be satisfied with protests."

The IPC and other groups have moved away from mass demonstrations, "where everyone just goes home afterwards and no on-going work of conscious-raising is done." according to Fonda.

Instead, IPC is urging people to keep informed, work with IPC, and most of all, write their congressional representatives. Their latest letter-writing campaign is aimed at keeping a $347 million ceiling on aid to Cambodia, now in the Foreign Assistance bill. Both Ford and Kissinger have lobbied intensively against the limit, which could undermine Lon Nol's regime, and probably lead to his fall.

Fonda admitted that Congress was by no means a progressive body. She referred to them as "a herd of turtles," each afraid of slicking their heads out too far. But because of mass movements in the 60's and because of eagerness on the part of Congress to disassociate itself from Nixon administration policies, actual change can be accomplished.

In addition, November is an election year with all the House and a third of the Senate facing reelection contests. Congresspeople are more readily persuaded by their constituents since lack of response will mean lack of votes. This is also an opportunity to vote lawmakers who support the continuing war out of office.

Fonda pointed out that until the war is ended, the U.S. will be unable to solve its domestic problems, including the economic crises. She argues that people must make ending the war a priority. I'm telling you this, not just tor the Indochinese people, and not just in some abstract way, it is important for us to remain active and participate." she said. "For our own minds, for our own health, for our own consciousnesses, we can't buy ANY myths. We are going to change American history. We have the power to do it."

Write or telegram Congress to:

1) Reduce military aid to Cambodia -- No specific amendment is on the floor now, but even general letters are important.

2) Re-instate 10% limitation on Food for Peace funds -- This is the bill Nixon vetoed as one of his last acts in office. In 1971, FFP funds were used to build tiger cages at Con Sanh prison.

3) Reduce economic aid to Indochina -- The Senate is proposing $535 million, the administration wants $940 million. Last year, $504 million went out. The goal is to make it even smaller this year.