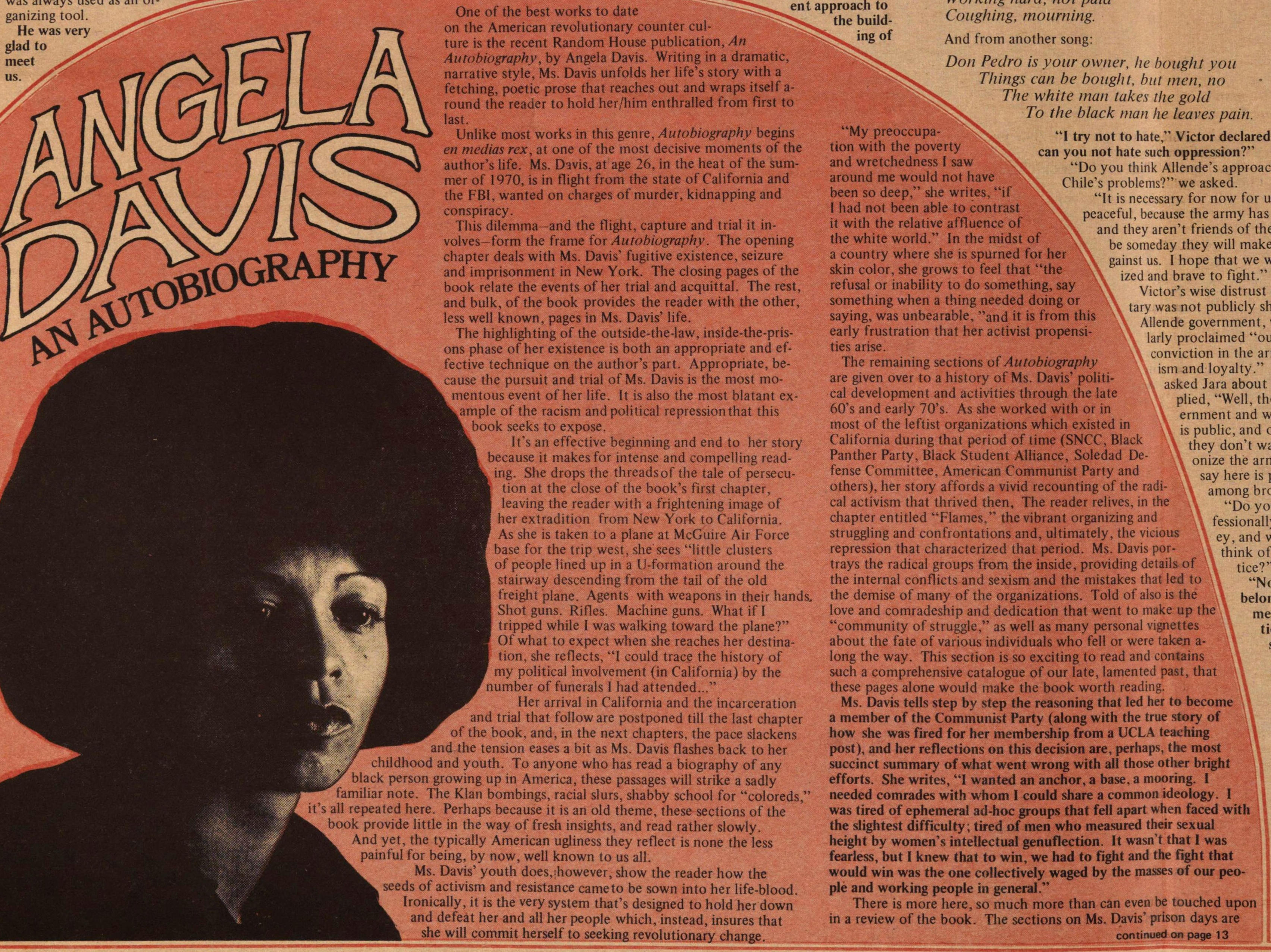 One of the best works to date on the American revolutionary counter culture is the recent Random House publication, An Autobiography, by Angela Davis. Writing in a dramatic, narrative style, Ms. Davis unfolds her life's story with a fetching, poetic prose that reaches out and wraps itself around the reader to hold her/him enthralled from first to last.

Unlike most works in this genre, Autobiography begins en medias rex, at one of the most decisive moments of the author's life. Ms. Davis, at age 26, in the heat of the summer of 1970, is in flight from the state of California and the FBI, wanted on charges of murder, kidnapping and conspiracy.

This dilemma--and the flight, capture and trial it involves--form the frame for Autobiography. The opening chapter deals with Ms. Davis' fugitive existence, seizure and imprisonment in New York. The closing pages of the book relate the events of her trial and acquittal. The rest, and bulk, of the book provides the reader with the other, less well known, pages in Ms. Davis' life.

The highlighting of the outside-the-law, inside-the-prisons phase of her existence is both an appropriate and effective technique on the author's part. Appropriate, because the pursuit and trial of Ms. Davis is the most momentous event of her life. It is also the most blatant example of the racism and political repression that this book seeks to expose.

It's an effective beginning and end to her story because it makes for intense and compelling reading. She drops the threads of the tale of persecution at the close of the book's first chapter, leaving the reader with a frightening image of her extradition from New York to California. As she is taken to a plane at McGuire Air Force base for the trip west, she sees "little clusters of people lined up in a U-formation around the stairway descending from the tail of the old freight plane. Agents with weapons in their hands. Shot guns. Rifles. Machine guns. What if I tripped while I was walking toward the plane?" Of what to expect when she reaches her destination, she reflects, "I could trace the history of my political involvement (in California) by the number of funerals I had attended..."

Her arrival in California and the incarceration and trial that follow are postponed till the last chapter of the book, and, in the next chapters, the pace slackens and the tension eases a bit as Ms. Davis flashes back to her childhood and youth. To anyone who has read a biography of any black person growing up in America, these passages will strike a sadly familiar note. The Klan bombings, racial slurs, shabby school for "coloreds," it's all repeated here. Perhaps because it is an old theme, these sections of the book provide little in the way of fresh insights, and read rather slowly. And yet, the typically American ugliness they reflect is none the less painful for being, by now, well known to us all.

Ms. Davis' youth does, however, show the reader how the seeds of activism and resistance came to be sown into her life-blood. Ironically, it is the very system that's designed to hold her down and defeat her and all her people which, instead, insures that she will commit herself to seeking revolutionary change.

"My preoccupation with the poverty and wretchedness I saw around me would not have been so deep," she writes, "if I had not been able to contrast it with the relative affluence of the white world." In the midst of a country where she is spurned for her skin color, she grows to feel that "the refusal or inability to do something, say something when a thing needed doing or saying, was unbearable," and it is from this early frustration that her activist propensities arise.

The remaining sections of Autobiography are given over to a history of Ms. Davis' political development and activities through the late 60's and early 70's. As she worked with or in most of the leftist organizations which existed in California during that period of time (SNCC, Black Panther Party, Black Student Alliance, Soledad Defense Committee, American Communist Party and others), her story affords a vivid recounting of the radical activism that thrived then. The reader relives, in the chapter entitled "Flames," the vibrant organizing and struggling and confrontations and, ultimately, the vicious repression that characterized that period. Ms. Davis portrays the radical groups from the inside, providing details of the internal conflicts and sexism and the mistakes that led to the demise of many of the organizations. Told of also is the love and comradeship and dedication that went to make up the "community of struggle," as well as many personal vignettes about the fate of various individuals who fell or were taken along the way. This section is so exciting to read and contains such a comprehensive catalogue of our late, lamented past, that these pages alone would make the book worth reading.

Ms. Davis tells step by step the reasoning that led her to become a member of the Communist Party (along with the true story of how she was fired for her membership from a UCLA teaching post), and her reflections on this decision are, perhaps, the most succinct summary of what went wrong with all those other bright efforts. She writes, "I wanted an anchor, a base, a mooring. I needed comrades with whom I could share a common ideology. I was tired of ephemeral ad-hoc groups that fell apart when faced with the slightest difficulty; tired of men who measured their sexual height by women's intellectual genuflection. It wasn't that I was fearless, but I knew that to win, we had to fight and the fight that would win was the one collectively waged by the masses of our people and working people in general."

There is more here, so much more than can even be touched upon in a review of the book. The sections on Ms. Davis' prison days are especially anguishing in their bleak revelation of what America does to its "criminal" class. "...jails and prisons are deadly places," she notes and her words carry conviction as we follow her on a stark parade from one grey cell to another, with the dismal monotony of days broken only by a matron's hostility or "the mesmerizing insanity of television."

And shining above the text, at all times, is Ms. Davis' incredible ability to turn tragedy into resolve, pain into action. When, in her prison cell, she is told that George Jackson has been murdered, the way she steels herself against the paralyzing sorrow she feels is indicative of her response, every time, to the troubles and difficulties she encounters. She determines that Jackson's death would only "refine my hatred of my jailers, position my contempt for the penal system and cement my bonds with other prisoners. It would give me the courage and energy I needed for a sustained war against the malevolent racism that had killed him."

The only disappointing aspect of Autobiography is that it more or less concludes with Ms. Davis' acquittal, and, except for a short epilogue, tells little about her present activities. By the concluding pages, the reader has become so involved with this remarkable young woman that she/he wants to know more. What is here, though, is a handbook on what being a dedicated revolutionary in America is all about, and how to do it well. The last chapter is headed by an epigram that reads, "walls turned sideways are bridges," and Angela Davis' story is a bridge that spans all the walls that have imprisoned us away from each other and from the truth that can set us free.

Reviewed for the SUN by Mary Wreford