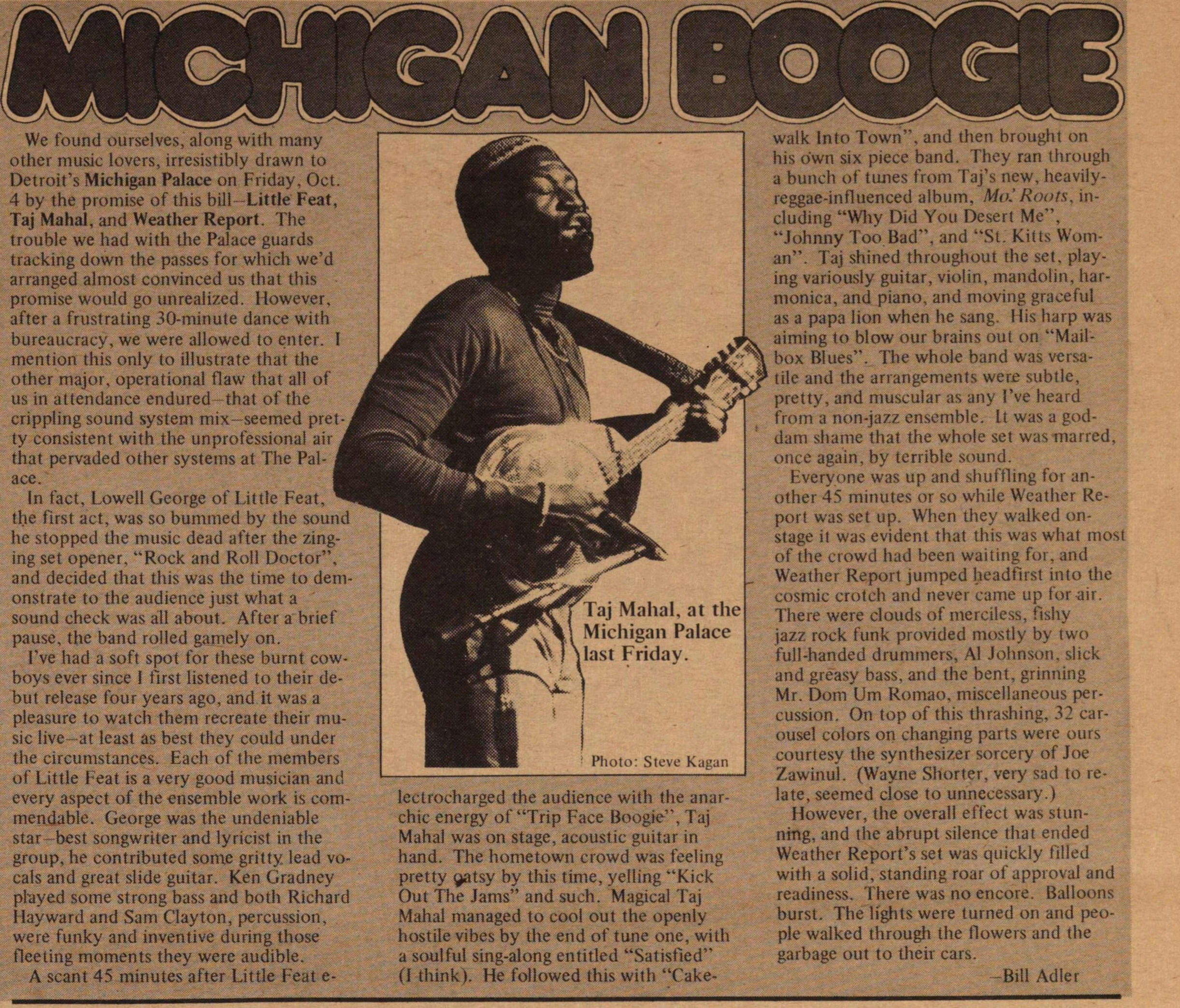 We found ourselves, along with many other niusie lovers, irresistibly drawn to Detroit's Michigan Palace on Friday, Oct. 4 by the prumise of this bill -Little Feat, Taj Mahal. and Weather Report. The trouble we had with the Palace guards tracking down the passes for which we'd arranged almost convinced us that this promise would go unreaüzed. However, after a frustrating 30-minute dance with bureaucracy, we were allowed to enter, l ment ion this only to Ilústrate that the other major, operational flaw that all of' us in attendance endured that of the crippling sound system mix- seemed pretty consistent with the un professional air i that pervaded other systems at The m ace. ■ In fact, Lowell George of Little Feat, 1 the first act, was so bummed by the sound hc stopped the music dead after the zinging set opener. "Rock and Roll Doctor", and decided that this was the time to demónstrate to the audience just what a sound check was al! about. After a brief pause, the band rolled gamely on. I've had a soft spot for these burnt cowboys ever since I first listened to their debut release four years ago, and it was a pleasure to watch them recréate their music live- at least as best they could under the circumstances. Each of the members of Little Feat is a very good musician and every aspect of the ensemble work is commendable. George was the undeniablo star best songwriter and lyricist in the group, he contributed some gritty lead vocals and great slide guitar. Ken Gradney phiyed some strong bass and both Richard Hayward and Sam Clayton, percussion, were funky and inventive during those fleeting moments they were audible. A scant 45 minutes after Little Feat lcctrocharged the audience with the anarchie energy of "Trip Face Boogie", Taj Mahal was on stage, acoustic guitur in hand. The hometown crowd was feeling pretty atsy by this time, veiling "Kick Out The Jams" and such. Magical Taj Mahal nianaged to cool out the openly hostiie vibes by the end of tune one, with a soulful sing-along entitled "Satisfied" (f think). He followed this with walk Into Town", and then brought on his o'wn six piece band. They ran through a bunch of tiines from Taj's ncw, heavilyreggae-influenced album. Mol Roots, including "Why Did You Deserl Me", "Johnny Too Bad", and "St. Kiits Woman". Taj shined throughout the set, playing variously guitar, violin, mandolín, harmonica, and piano, and moving graceful as a papa lion when he sang. His harp was aiming to blow our brains out on "Maili box Blues". The whole band was versa tile and the arrangements werf subtle, pretty, and muscular as any I've heard from a non-jazz ensemble. It was a goddam shame that the whole set was marred, once again, by terrible sound. Everyone was up and shuffling for another 45 minutes or so while Weather Report was set up. When they walked onstage it was evident that this was what most of the crowd had been waiting for, and Weather Report jumped headfirsl into the cosmic crotch and never cante up for air. There were clouds of merciless, fishy jazz rock funk provided mostly by two full-handed drummers, Al Johnson, slick and greasy bass, and the bent, grinning Mr. Dom Urn Romao, miscellaneous percussion. On top of this thrashing, 32 carousel coiors on changing parts were cnns courtesy the synthesizer sorcery of Joe Zawinul. (Wayne Shorter, very sad to relate, seemed close to unnecessary.) However, the overall effect was stunnmg, and the abrupt silence that ended Weather Report's set was quickly filled with a solid, standing roar of approval and readiness. There was no encoré. Balloons burst. The líghts were turned on and people walked through the flowers and the garbage out to their cars. -Bill Adler