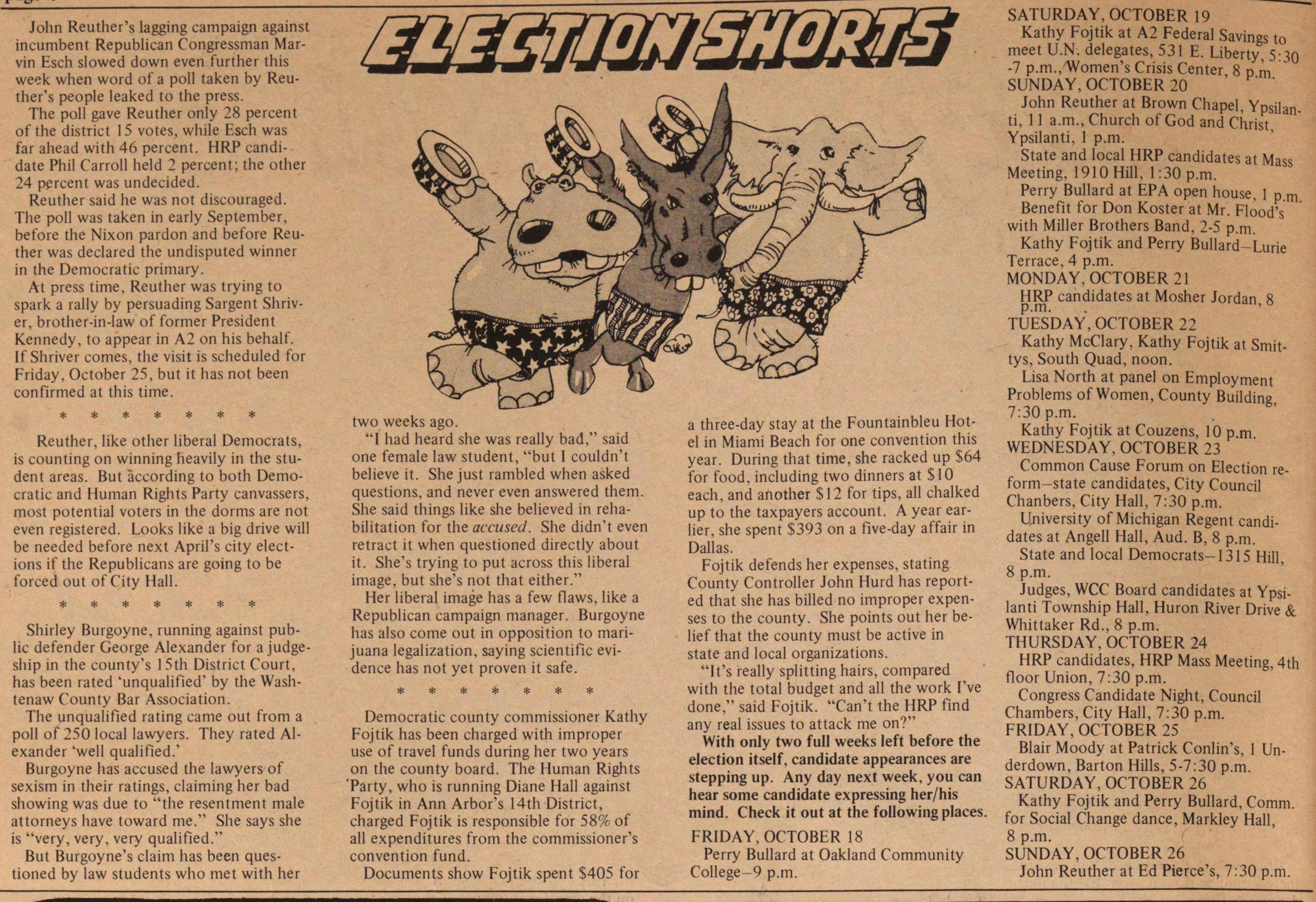 John Reuther's lagging campaign against incumbent Republican Congressman Marvin Esch slowed down even further this week when word of a poll taken by Reuther's people leaked to the press.

The poll gave Reuther only 28 percent of the district 15 votes, while Esch was far ahead with 46 percent. HRP candidate Phil Carroll held 2 percent; the other 24 percent was undecided.

Reuther said he was not discouraged. The poll was taken in early September, before the Nixon pardon and before Reuther was declared the undisputed winner in the Democratic primary.

At press time, Reuther was trying to spark a rally by persuading Sargent Shriver, brother-in-law of former President Kennedy, to appear in A2 on his behalf. If Shriver comes, the visit is scheduled for Friday, October 25, but it has not been confirmed at this time.

Reuther, like other liberal Democrats, is counting on winning heavily in the student areas. But according to both Democratic and Human Rights Party canvassers, most potential voters in the dorms are not even registered. Looks like a big drive will be needed before next April's city elections if the Republicans are going to be forced out of City Hall.

Shirley Burgoyne, running against public defender George Alexander for a judgeship in the county's 15th District Court, has been rated 'unqualified' by the Washtenaw County Bar Association.

The unqualified rating came out from a poll of 250 local lawyers. They rated Alexander 'well qualified.'

Burgoyne has accused the lawyers of sexism in their ratings, claiming her bad showing was due to "the resentment male attorneys have toward me." She says she is "very, very, very qualified."

But Burgoyne's claim has been questioned by law students who met with her two weeks ago.

"I had heard she was really bad," said one female law student, "but I couldn't believe it. She just rambled when asked questions, and never even answered them. She said things like she believed in rehabilitation for the accused. She didn't even retract it when questioned directly about it. She's trying to put across this liberal image, but she's not that either."

Her liberal image has a few flaws, like a Republican campaign manager. Burgoyne has also come out in opposition to marijuana legalization, saying scientific evidence has not yet proven it safe.

Democratic county commissioner Kathy Fojtik has been charged with improper use of travel funds during her two years on the county board. The Human Rights Party, who is running Diane Hall against Fojtik in Ann Arbor's 14th District, charged Fojtik is responsible for 58% of all expenditures from the commissioner's convention fund. Documents show Fojtik spent $405 for a three-day stay at the Fountainbleu Hotel in Miami Beach for one convention this year. During that time, she racked up $64 for food, including two dinners at $10 each, and another $12 for tips, all chalked up to the taxpayers account. A year earlier, she spent $393 on a five-day affair in Dallas.

Fojtik defends her expenses, stating County Controller John Hurd has reported that she has billed no improper expenses to the county. She points out her belief that the county must be active in state and local organizations.

"It's really splitting hairs, compared with the total budget and all the work I’ve done," said Fojtik. "Can't the HRP find any real issues to attack me on?"

With only two full weeks left before the election itself, candidate appearances are stepping up. Any day next week, you can hear some candidate expressing her/his mind. Check it out at the following places.