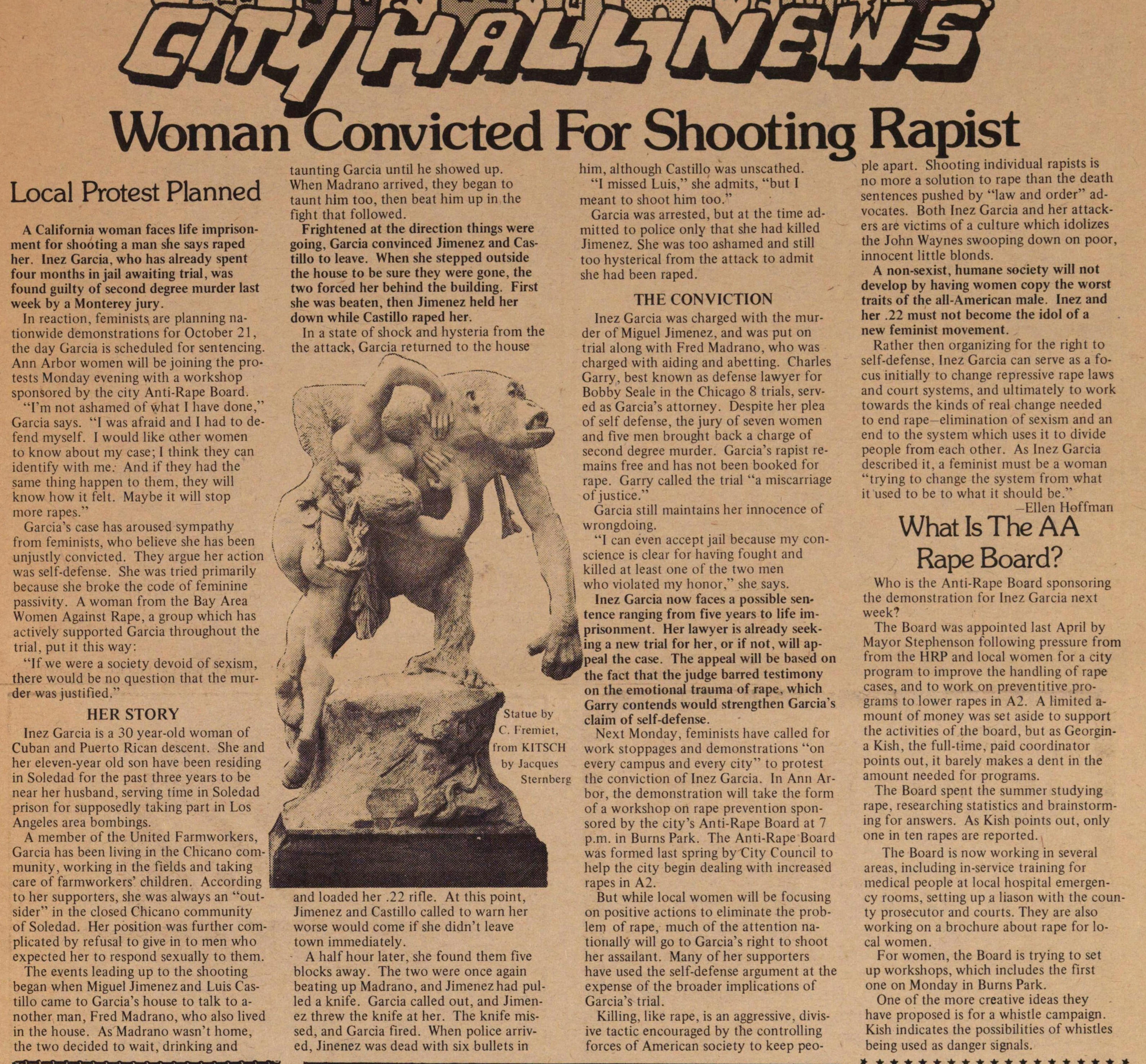 A California woman faces life imprisonment for shooting a man she says raped her. Inez Garcia, who has already spent four months in jail awaiting trial, was found guilty of second degree murder last week by a Monterey jury.

In reaction, feminists are planning nationwide demonstrations for October 21, the day Garcia is scheduled for sentencing. Ann Arbor women will be joining the protests Monday evening with a workshop sponsored by the city Anti-Rape Board.

"I'm not ashamed of what I have done," Garcia says. "I was afraid and I had to defend myself. I would like other women to know about my case; I think they can identify with me: And if they had the same thing happen to them, they will know how it felt. Maybe it will stop more rapes."

Garcia's case has aroused sympathy from feminists, who believe she has been unjustly convicted. They argue her action was self-defense. She was tried primarily because she broke the code of feminine passivity. A woman from the Bay Area Women Against Rape, a group which has actively supported Garcia throughout the trial, put it this way:

"If we were a society devoid of sexism, there would be no question that the murder was justified."

Inez Garcia is a 30 year-old woman of Cuban and Puerto Rican descent. She and her eleven-year old son have been residing in Soledad for the past three years to be near her husband, serving time in Soledad prison for supposedly taking part in Los Angeles area bombings.

A member of the United Farmworkers, Garcia has been living in the Chicano community, working in the fields and taking care of farmworkers' children. According to her supporters, she was always an "outsider" in the closed Chicano community of Soledad. Her position was further complicated by refusal to give in to men who expected her to respond sexually to them.

The events leading up to the shooting began when Miguel Jiménez and Luis Castillo came to Garcia's house to talk to another man, Fred Madrano, who also lived in the house. As Madrano wasn't home, the two decided to wait, drinking and taunting Garcia until he showed up. When Madrano arrived, they began to taunt him too, then beat him up in the fight that followed. Frightened at the direction things were going. Garcia convinced Jiménez and Castillo to leave. When she stepped outside the house to be sure they were gone, the two forced her behind the building. First she was beaten, then Jiménez held her down while Castillo raped her. In a state of shock and hysteria from the attack, Garcia returned to the house and loaded her .22 rifle. At this point, Jiménez and Castillo called to warn her worse would come if she didn't leave town immediately.

A half hour later, she found them five blocks away. The two were once again beating up Madrano, and Jiménez had pulled a knife. Garcia called out, and Jiménez threw the knife at her. The knife missed, and Garcia fired. When police arrived, Jimenez was dead with six bullets in him, although Castillo was unscathed.

"I missed Luis," she admits, "but I meant to shoot him too."

Garcia was arrested, but at the time admitted to police only that she had killed Jiménez. She was too ashamed and still too hysterical from the attack to admit she had been raped.

Inez Garcia was charged with the murder of Miguel Jiménez, and was put on trial along with Fred Madrano, who was charged with aiding and abetting. Charles Garry, best known as defense lawyer for Bobby Seale in the Chicago 8 trials, served as Garcia's attorney. Despite her plea of self-defense, the jury of seven women and five men brought back a charge of second degree murder. Garcia's rapist remains free and has not been booked for rape. Garry called the trial "a miscarriage of justice."

"I can even accept jail because my conscience is clear for having fought and killed at least one of the two men who violated my honor." she says.

Inez Garcia now faces a possible sentence ranging from five years to life imprisonment. Her lawyer is already seeking a new trial for her, or if not, will appeal the case. The appeal will be based on the fact that the judge barred testimony on the emotional trauma of rape, which Garry contends would strengthen Garcia's claim of self-defense.

Next Monday, feminists have called for work stoppages and demonstrations "on every campus and every city" to protest the conviction of Inez Garcia. In Ann Arbor, the demonstration will take the form of a workshop on rape prevention sponsored by the city's Anti-Rape Board at 7 p.m. in Burns Park. The Anti-Rape Board was formed last spring by City Council to help the city begin dealing with increased rapes in A2.

But while local women will be focusing on positive actions to eliminate the problem of rape, much of the attention nationally will go to Garcia's right to shoot her assailant. Many of her supporters have used the self-defense argument at the expense of the broader implications of Garcia's trial.

Killing, like rape, is an aggressive, divisive tactic encouraged by the controlling forces of American society to keep people apart. Shooting individual rapists is no more a solution to rape than the death sentences pushed by "law and order" advocates. Both Inez Garcia and her attackers are victims of a culture which idolizes the John Waynes swooping down on poor, innocent little blonds.

A non-sexist, humane society will not develop by having women copy the worst traits of the all-American male. Inez and her .22 must not become the idol of a new feminist movement.

Rather then organizing for the right to self-defense, Inez Garcia can serve as a focus initially to change repressive rape laws and court systems, and ultimately to work towards the kinds of real change needed to end rape – elimination of sexism and an end to the system which uses it to divide people from each other. As Inez Garcia described it, a feminist must be a woman "trying to change the system from what it used to be to what it should be."