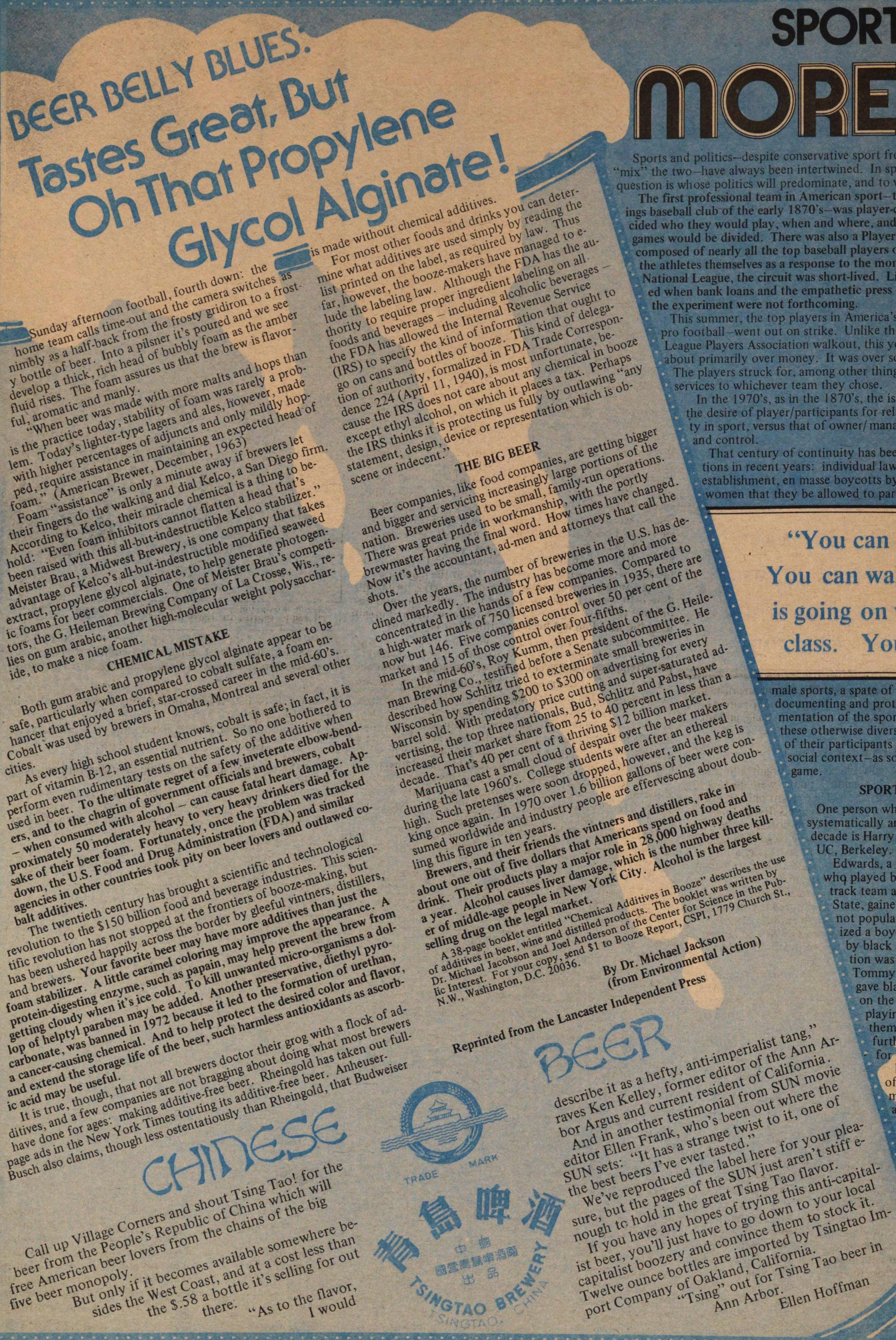 Sunday afternoon football, 4th down: the home team calls timeout and the camera switches as nimbly as a halfback from the frosty gridiron to a frosty bottle of beer. Into a pilsner it's poured and we see develop a thick, rich head of bubbly foam as the amber fluid rises. The foam assures us that they brew is flavorful, aromatic and manly.

“When beer was made with more malts in hops then is the practice today, stability of foam was rarely a problem.Today's lighter-type lagers and ales, however, made with higher percentages of adjuncts and only mildly hopped, require assistance in maintaining an expected head of foam.”( American Brewer, December, 1963)

Foam “assistance”is only a minute away if Brewers let their fingers do the walking and dial Kelco, a San Diego firm. According to Kelco , their miracle chemical is a thing to behold: “Even foam inhibitors cannot flatten a head that's been raised with this all – but – indestructible Kelco stabilizer.”

Both gum arabic and propylene glycol alginate appear to be safe , particularly when compared to cobalt sulfate, a foam enhancer that enjoyed a brief, star-crossed-career in the mid- 60s. Cobalt was used by Brewers in Omaha, Montreal and several other cities.

As every high school student knows, cobalt is safe ; in fact , it is part of vitamin B12 , an  Essential nutrient. So no one bothered to perform even rudimentary tests on the safety of the additive when used in beer. To the ultimate regret of a few inveterate elbow-benders, and to the chagrin of government officials and brewers, cobalt - When consumed with alcohol — can cause fatal heart damage. Approximately 50 moderately heavy to very heavy drinkers died for the sake of their beer foam. Fortunately, once the problem was tracked, the US Food and Drug administration (FDA ) and similar agencies in other countries took pity on beer lovers and outlawed cobalt additives.

The 20th century has brought a scientific and technological revolution to the $150 billion dollar food and beverage industries. This scientific revolution has not stopped at the frontier of booze-making, but has been ushered happily across the border by gleeful  vintners, distillers and Brewers. Your favorite beer may have more additives than just the foam stabilizer. A little caramel coloring may improve the appearance. A protein - digesting enzyme, such as papain, may help prevent the brew from getting cloudy when it's  ice cold. To kill unwanted micro organisms a dollop of heptyl paraben may be added. Another preservative, diethyl pyrocarbon carbonate, was banned in 1972 because it led to the formation of urethan, a cancer - causing chemical. And to help protect the desire color and flavor, and extend the storage life of the beer, such harmless antioxidants ascorbic acid may be useful.

It is true, though, that not all Brewers doctor their grog with a flock of additives , and a few companies are not bragging about doing what most Brewers have done for ages; making additive-free beer. Rheingold has taken out full page ads in the New York Times touting it's additive free beer. Anheuser-Brusch also claims, though less ostentatiously than Rheingold, that Budweiser is made without additives.

For most other foods and drinks you can determine when additives are used simply by reading the list printed on the label, required by law. Thus far, however, the booze - makers have managed to elude the labeling law. Although the FDA has authority to require proper ingredient labeling on all foods and beverages — including alcoholic beverages – The FTA has allowed the internal revenue service (IRS) to specify the kinds of information that ought to go on cans and bottles of booze. This kind of delegation of authority, formalized in FDA Trade Correspondence to 244 (April 11, 1940), is most unfortunate, because the IRS does not care about any chemical in booze except ethyl alcohol, on which it places a tax. Perhaps The IRS thinks it is protecting us fully by outlawing “any statement, design, device or representation which is obscene or indecent.”

Beer companies, like food companies, are getting bigger and bigger in servicing increasingly large portions of the nation. Breweries used to be small, family - run operations. There was great pride in worksmanship, with the portly brewmaster having the final word. How times have changed. Now it's the accountant, ad – men and attorneys that call the shots.

Over the years, the number of breweries in the US has declined markedly The industry has become more and more concentrated in the hands of a few companies. Compared to a high-water mark of 750 licensed breweries in 1935, there are now about 146. Five companies control over 50% of the market and 15 of those control over four-fifths.

In the mid-1960s, Roy Kumm, then president of G. Heileman Brewing Co., testified before a Senate subcommittee he described how Schlitz tried to exterminate small breweries in Wisconsin by spending $200 to $300 on advertising for every barrel sold. With predatory price cutting and supersaturated advertising, the top three  nationals, Bud, Schlitz and Pabst, have increase their market share from 25 to 40% in less than a decade. That's 40% of a thriving $ 12 billion market.

Marijuana cast a small cloud of despair over the beer makers during the late 1960s. College students were after an ethereal high. Such pretenses were soon dropped, however, and the keg is king once again. In 1970, 1.6 billion gallons of beer were consumed worldwide and industry people are effervescing about doubling this figure in ten years.

Brewers, and their friends the vintners and distillers , rake in about one out of five dollars that Americans spend on food and drink. Their products play a major role in 28,000 highway deaths a year. Alcohol causes liver damage, which is the number three killer of middle-aged people in New York City. Alcohol is the largest selling drug on the legal market.

A 38 page booklet entitled “Chemical Additives In Booze” describes the use of additives in beer, wine and distilled products. The booklet was written by Dr.  Michael Jacobson and Joel Anderson of the Center for Science In The Public Interest. For your copy , send $1 to Booze Report, CSPI, 1779 church St, NW, Washington DC 20036

Reprinted from the Lancaster Independent Press

Call up Village Corners and shout Tsing Tao! for the beer from the People’s Republic of China which will free American beer lovers from the chains of the big five beer monopoly.

But only if it becomes available somewhere besides the West Coast, and at a cost less than $.58 a bottle it’s selling for out there. “As to the flavor, I would describe it as a hefty, anti-imperialist tang,” raves Ken Kelley, former editor of the Ann Arbor Argus and current resident of California.

And in another testimonial from SUN. Movie editor Ellen Frank, who’s been out where the SUN sets: “It has a strange twist to it, one of the best beers I’ve ever tasted.”

We’ve reproduced the label here for your pleasure, but the pages of the SUN just aren’t stiff enough to hold in the great Tsing Tao flavor.

If you have any hopes of trying this anti-capitalist boozery and convince them to stock it. Twelve ounce bottles are imported by Tsingtao Import Company of Oakland, California.

“Tsing” out of Tsing Tao beer in