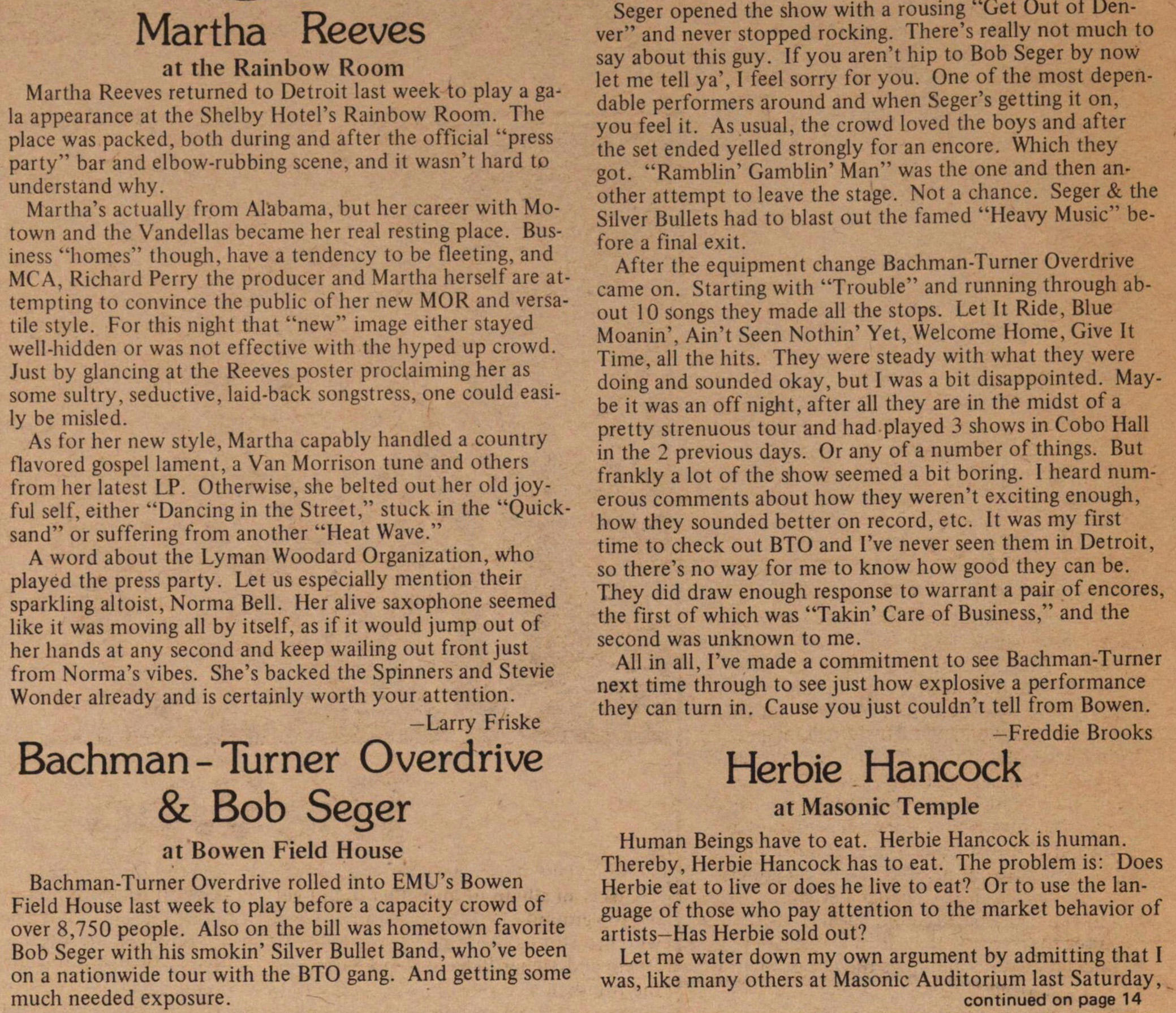 Bachman-Turner Overdrive rolled into EMU's Bowen Field House last week to play before a capacity crowd of over 8,750 people. Also on the bill was hometown favorite Bob Seger with his smokin' Silver Bullet Band, who've been on a nationwide tour with the BTO gang. And getting some much needed exposure.

Seger opened the show with a rousing Get Out of Denver" and never stopped rocking. There's really not much to say about this guy. If you aren't hip to Bob Seger by now let me tell ya', I feel sorry for you. One of the most dependable performers around and when Seger's getting it on, you feel it. As usual, the crowd loved the boys and after the set ended yelled strongly for an encore.  Which they got. "Ramblin' Gamblin' Man" was the one and then another attempt to leave the stage. Not a chance. Seger & the Silver Bullets had to blast out the famed "Heavy Music" before a final exit.

After the equipment change Bachman-Turner Overdrive came on. Starting with "Trouble" and running through about 10 songs they made all the stops. Let It Ride, Blue Moanin', Ain't Seen Nothin' Yet, Welcome Home, Give It Time, all the hits. They were steady with what they were doing and sounded okay, but I was a bit disappointed. Maybe it was an off night, after all they are in the midst of a pretty strenuous tour and had played 3 shows in Cobo Hall in the 2 previous days. Or any of a number of things. But frankly a lot of the show seemed a bit boring. I heard numerous comments about how they weren't exciting enough, how they sounded better on record, etc. It was my first time to check out BTO and I've never seen them in Detroit, so there's no way for me to know how good they can be. They did draw enough response to warrant a pair of encores, the first of which was "Takin' Care of Business," and the second was unknown to me.

All in all, I've made a commitment to see Bachman-Turner next time through to see just how explosive a performance they can turn in. Cause you just couldn't tell from Bowen.