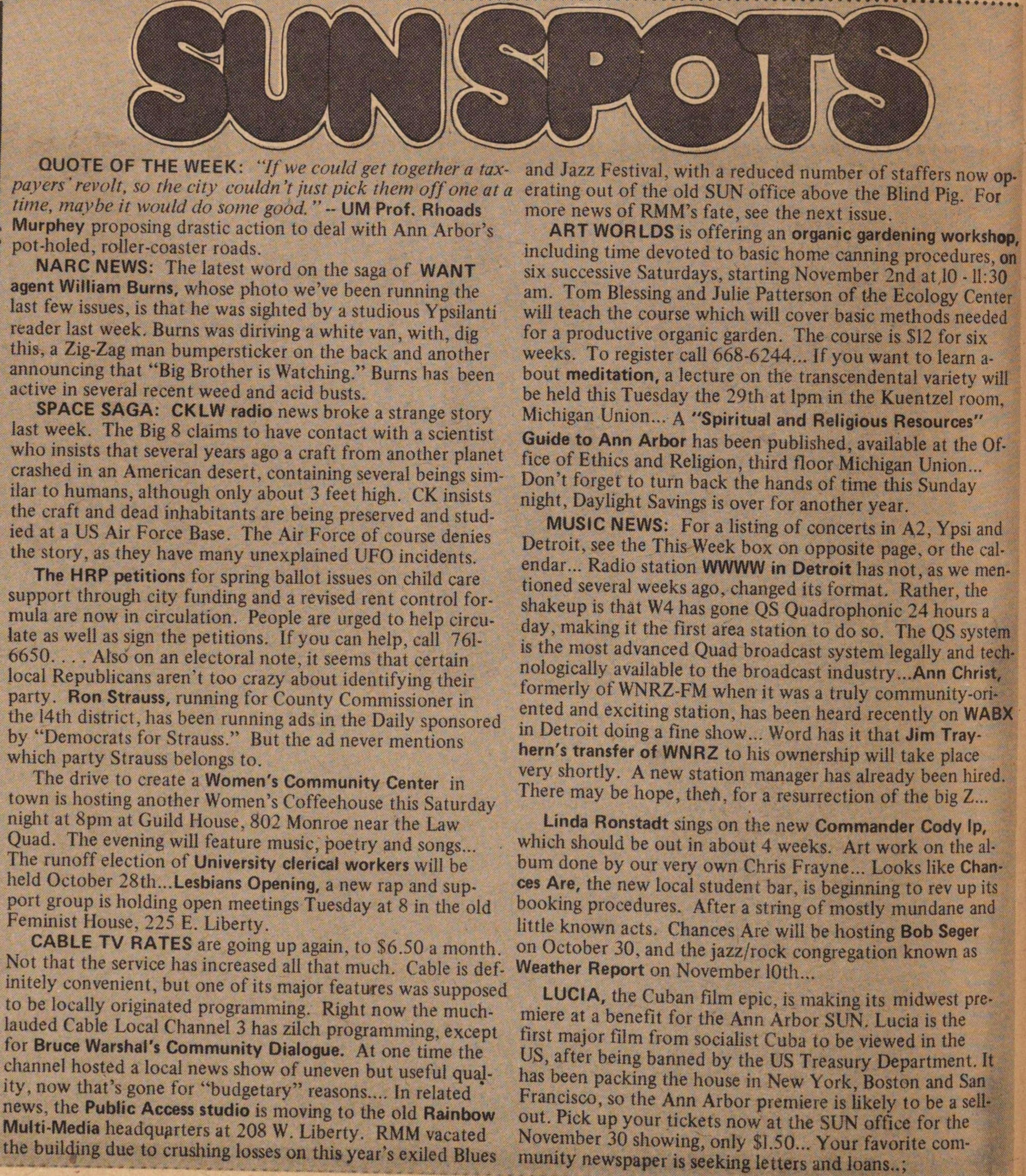 QUOTE OF THE WEEK: "If we could get together a taxpayers' revolt, so the city couldn't just pick them off one at a time, maybe it would do some good." - UM Prof. Rhoads Murphey proposing drastic action to deal with Ann Arbor's pot-holed, roller-coaster roads.

NARC NEWS: The latest word on the saga of WANT agent William Burns, whose photo we've been running the last few issues, is that he was sighted by a studious Ypsilanti reader last week. Burns was driving a white van, with, dig this, a Zig-Zag man bumper sticker on the back and another announcing that "Big Brother is Watching." Burns has been active in several recent weed and acid busts.

SPACE SAGA: CKLW radio news broke a strange story last week. The Big 8 claims to have contact with a scientist who insists that several years ago a craft from another planet crashed in an American desert, containing several beings similar to humans, although only about 3 feet high. CK insists the craft and dead inhabitants are being preserved and studied at a US Air Force Base. The Air Force of course denies the story, as they have many unexplained UFO incidents.

The HRYP petitions for spring ballot issues on child care support through city funding and a revised rent control formula are now in circulation. People are urged to help circulate as well as sign the petitions. If you can help, call 761-6650. . . . Also on an electoral note, it seems that certain local Republicans aren't too crazy about identifying their party. Ron Strauss, running for County Commissioner in the 14th district, has been running ads in the Daily sponsored by "Democrats for Strauss." But the ad never mentions which party Strauss belongs to.

The drive to create a Women's Community Center in town is hosting another Women's Coffeehouse this Saturday night at 8pm at Guild House, 802 Monroe near the Law Quad. The evening will feature music, poetry and songs... The runoff election of University clerical workers will be held October 28th...Lesbians Opening, a new rap and support group is holding open meetings Tuesday at 8 in the old Feminist House, 225 E. Liberty.

CABLE TV RATES are going up again, to $6.50 a month. Not that the service has increased all that much. Cable is definitely convenient, but one of its major features was supposed to be locally originated programming. Right now the much-lauded Cable Local Channel 3 has zilch programming, except for Bruce Warshal's Community Dialogue. At one time the channel hosted a local news show of uneven but useful quality, now that's gone for "budgetary" reasons.... In related news, the Public Access studio is moving to the old Rainbow Multi-Media headquarters at 208 W. Liberty. RMM vacated the building due to crushing losses on this year's exiled Blues and Jazz Festival, with a reduced number of staffers now operating out of the old SUN office above the Blind Pig. For more news of RMM's fate, see the next issue.

ART WORLDS is offering an organic gardening workshop, including time devoted to basic home canning procedures, on six successive Saturdays, starting November 2nd at 10 - 11:30 am. Torn Blessing and Julie Patterson of the Ecology Center will teach the course which will cover basic methods needed for a productive organic garden. The course is $12 for six weeks. To register call 668-6244... If you want to learn about meditation, a lecture on the transcendental variety will be held this Tuesday the 29th at 1pm in the Kuentzel room, Michigan Union... A "Spiritual and Religious Resources" Guide to Ann Arbor has been published, available at the Office of Ethics and Religion, third floor Michigan Union... Don't forget to turn back the hands of time this Sunday night, Daylight Savings is over for another year.

MUSIC NEWS: For a listing of concerts in A2, Ypsi and Detroit, see the This Week box on opposite page or the calendar... Radio station WWWW in Detroit has not, as we mentioned several weeks ago, changed its format. Rather, the shakeup is that W4 has gone QS Quadrophonic 24 hours a day, making it the first area station to do so. The QS system is the most advanced Quad broadcast system legally and technologically available to the broadcast industry...Ann Christ, formerly of WNRZ-FM when it was a truly community-oriented and exciting station, has been heard recently on WABX in Detroit doing a fine show... Word has it that Jim Trayhern's transfer of WNRZ to his ownership will take place very shortly. A new station manager has already been hired. There may be hope, theft, for a resurrection of the big Z...

Linda Ronstadt sings on the new Commander Cody lp, which should be out in about 4 weeks. Art work on the album done by our very own Chris Frayne... Looks like Chances Are, the new local student bar, is beginning to rev up its booking procedures. After a string of mostly mundane and little known acts, Chances Are will be hosting Bob Seger on October 30, and the jazz/rock congregation known as Weather Report on November 10th...

LUCIA, the Cuban film epic, is making its midwest premiere at a benefit for the Ann Arbor SUN. Lucia is the first major film from socialist Cuba to be viewed in the US, after being banned by the US Treasury Department, it has been packing the house in New York, Boston and San Francisco, so the Ann Arbor premiere is likely to be a sellout. Pick up your tickets now at the SUN office for the November 30 showing, only $1.50... Your favorite community newspaper is seeking letters and loans..;