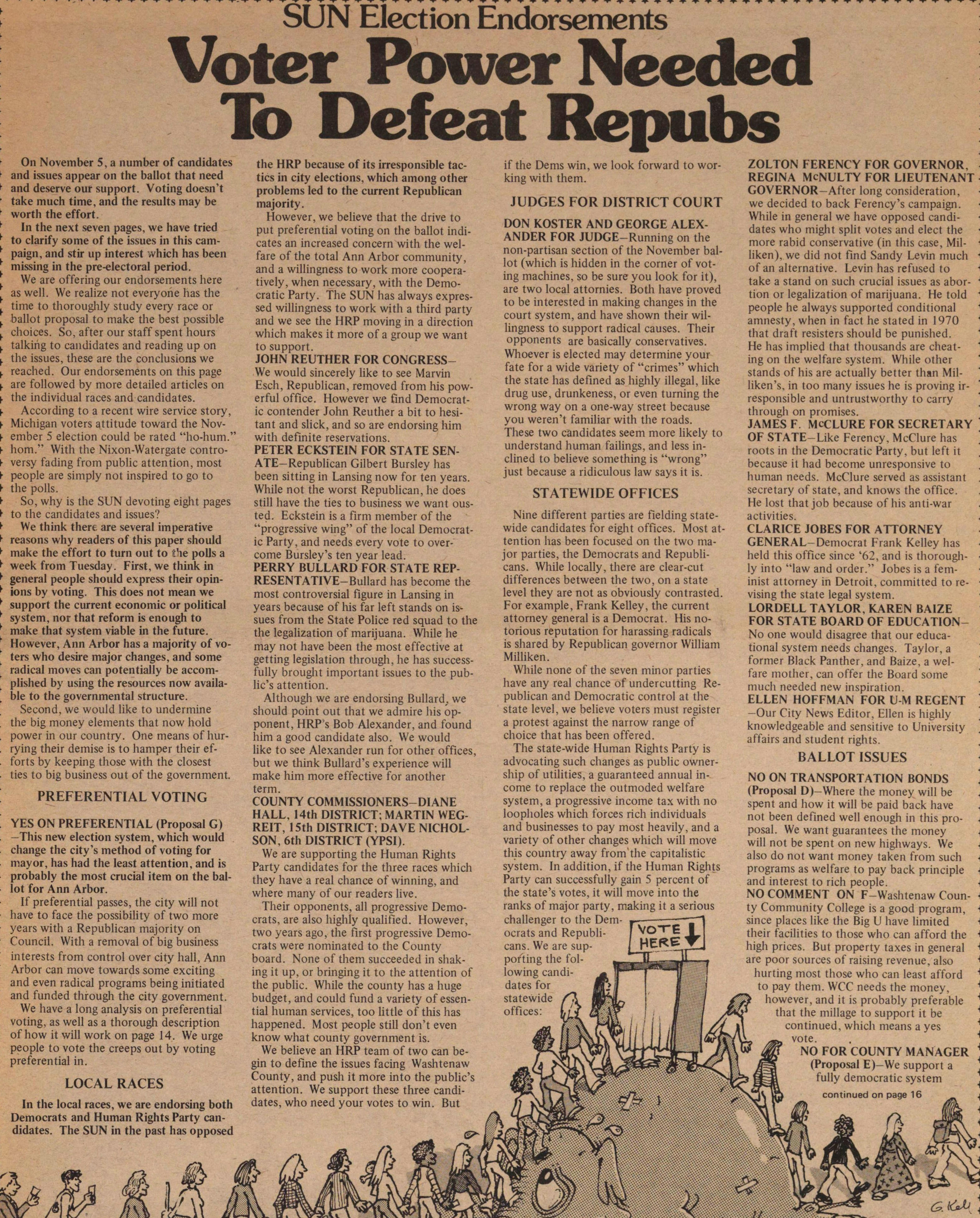 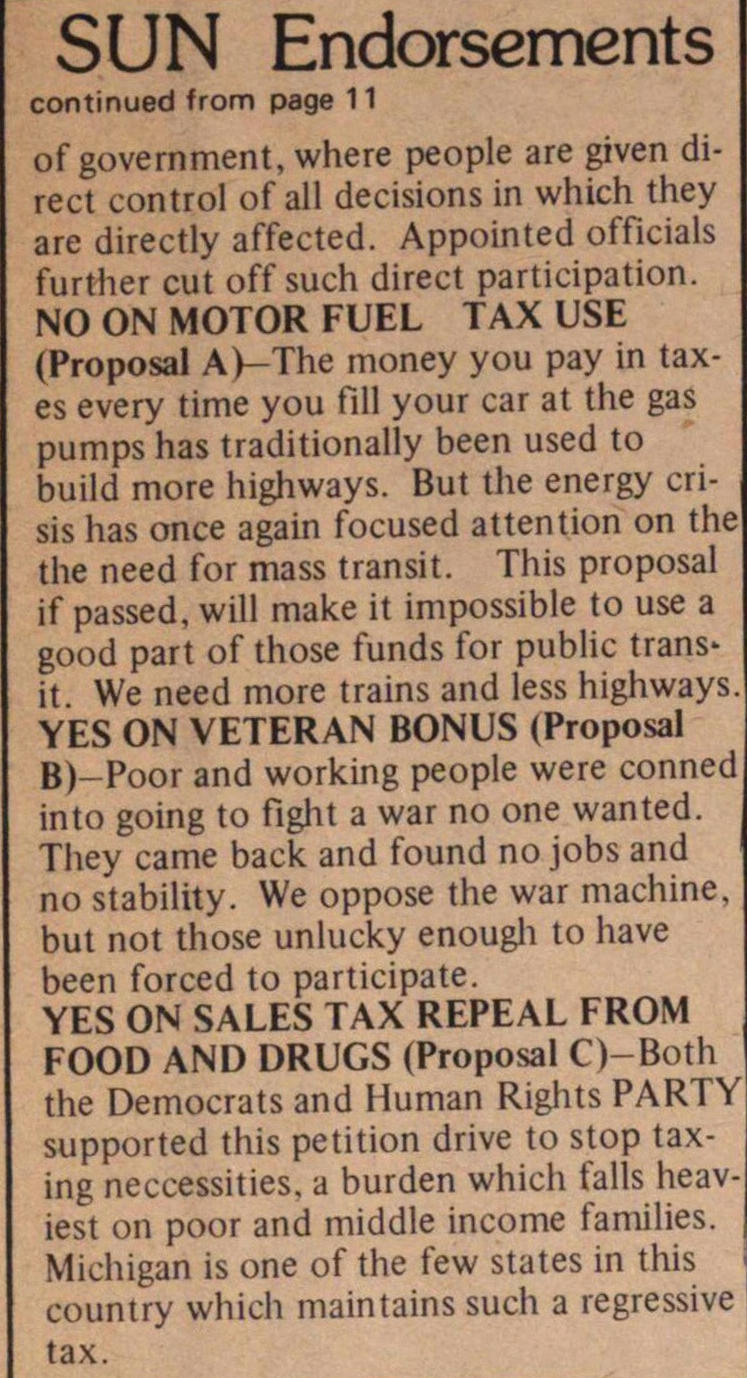 On November 5, a number of candidates and issues appear on the ballot that need and deserve our support. Voting doesn't take much time, and the results may be worth the effort.

In the next seven pages, we have tried to clarify some of the issues in this campaign, and stir up interest which has been y missing in the pre-electoral period.

We are offering our endorsements here as well. We realize not everyone has the time to thoroughly study every race or ballot proposal to make the best possible choices. So, after our staff spent hours talking to candidates and reading up on the issues, these are the conclusions we reached. Our endorsements on this page are followed by more detailed articles on the individual races and candidates.

According to a recent wire service story, Michigan voters attitude toward the November 5 election could be rated "ho-hum. hom." With the Nixon-Watergate controversy fading from public attention, most y people are simply not inspired to go to the polls.

So, why is the SUN devoting eight pages  to the candidates and issues?

We think there are several imperative reasons why readers of this paper should make the effort to turn out to the polls a week from Tuesday. First, we think in general people should express their opinions by voting. This does not mean we support the current economy or political system, nor that reform is enough to make that system viable in the future. However, Ann Arbor has a majority of voters who desire major changes, and some radical moves can potentially be accomplished by using the resources now available to the governmental structure.

Second, we would like to undermine the big money elements that now hold power in our country. One means of hurrying their demise is to hamper their efforts by keeping those with the closest ties to big business out of the government.

-This new election system, which would change the city's method of voting for mayor, has had the least attention, and is probably the most crucial item on the ballot for Ann Arbor.

If preferential passes, the city will not have to face the possibility of two more years with a Republican majority on Council. With a removal of big business interests from control over city hall, Ann Arbor can move towards some exciting and even radical programs being initiated and funded through the city government.

We have a long analysis on preferential voting, as well as a thorough description of how it will work on page 14. We urge people to vote the creeps out by voting preferential in.

In the local races, we are endorsing both Democrats and Human Rights Party candidates. The SUN in the past has opposed the HRP because of its irresponsible tactics in city elections, which among other problems led to the current Republican majority.

However, we believe that the drive to put preferential voting on the ballot indicates an increased concern with the welfare of the total Ann Arbor community, and a willingness to work more cooperatively, when necessary, with the Democratic Party. The SUN has always expressed willingness to work with a third party and we see the HRP moving in a direction which makes it more of a group we want to support.

We would sincerely like to see Marvin Esch, Republican, removed from his powerful office. However we find Democratic contender John Reuther a bit to hesitant and slick, and so are endorsing him with definite reservations.

PETER ECKSTEIN FOR STATE SENATE- Republican Gilbert Bursley has been sitting in Lansing now for ten years. While not the worst Republican, he does still have the ties to business we want ousted. Eckstein is a firm member of the "progressive wing" of the local Democratic Party, and needs every vote to overcome Bursley's ten year lead.

Bullard has become the most controversial figure in Lansing in years because of his far left stands on issues from the State Police red squad to the the legalization of marijuana. While he may not have been the most effective at getting legislation through, he has successfully brought important issues to the public's attention.

Although we are endorsing Bullard, we should point out that we admire his opponent, HRP's Bob Alexander, and found him a good candidate also. We would like to see Alexander run for other offices, but we think Bullard's experience will make him more effective for another term.

We are supporting the Human Rights Party candidates for the three races which they have a real chance of winning, and where many of our readers live. Their opponents, all progressive Democrats, are also highly qualified. However, two years ago, the first progressive Democrats were nominated to the County board. None of them succeeded in shaking it up, or bringing it to the attention of the public. While the county has a huge budget, and could fund a variety of essential human services, too little of this has happened. Most people still don't even know what county government is.

We believe an HRP team of two can begin to define the issues facing Washtenaw County, and push it more into the public's attention. We support these three candidates, who need your votes to win. But if the Dems win, we look forward to working with them.

Running on the non-partisan section of the November ballot (which is hidden in the corner of voting machines, so be sure you look for it), are two local attorney's. Both have proved to be interested in making changes in the court system, and have shown their willingness to support radical causes. Their opponents are basically conservatives. Whoever is elected may determine your fate for a wide variety of "crimes" which the state has defined as highly illegal, like drug use, drunkeness, or even turning the wrong way on a one-way street because you weren't familiar with the roads. These two candidates seem more likely to understand human failings, and less inclined to believe something is "wrong" just because a ridiculous law says it is.

Nine different parties are fielding statewide candidates for eight offices. Most attention has been focused on the two major parties, the Democrats and Republicans. While locally, there are clear-cut differences between the two, on a state level they are not as obviously contrasted. For example, Frank Kelley, the current attorney general is a Democrat. His notorious reputation for harassing radicals is shared by Republican governor William Milliken.

While none of the seven minor parties have any real chance of undercutting Republican and Democratic control at the state level, we believe voters must register a protest against the narrow range of choice that has been offered.

The state-wide Human Rights Party is advocating such changes as public ownership of Utilities, a guaranteed annual income to replace the outmoded welfare system, a progressive income tax with no loopholes which forces rich individuals and businesses to pay most heavily, and a variety of other changes which will move this country away from the capitalistic system. In addition, if the Human Rights Party can successfully gain 5 percent of the state's votes, it will move into the ranks of major party, making it a serious challenger to the Democrats and cans. We are supporting the lowing dates for statewide offices:

After long consideration, we decided to back Ferency's campaign. While in general we have opposed candidates who might split votes and elect the more rabid conservative (in this case, Milliken), we did not find Sandy Levin much of an alternative. Levin has refused to take a stand on such crucial issues as abortion or legalization of marijuana. He told people he always supported conditional amnesty, when in fact he stated in 1970 that draft resisters should be punished. He has implied that thousands are cheating on the welfare system. While other stands of his are actually better than Milliken's, in too many issues he is proving irresponsible and untrustworthy to carry through on promises.

Like Ferency, McClure has roots in the Democratic Party, but left it because it had become unresponsive to human needs. McClure served as assistant secretary of state, and knows the office. He lost that job because of his anti-war activities.

Democrat Frank Kelley has held this office since '62, and is thoroughly into "law and order." Jobes is a feminist attorney in Detroit, committed to revising the state legal system.

LORDELL TAYLOR, KAREN BAIZE FOR   STATE BOARD OF EDUCATION

No one would disagree that our educational system needs changes. Taylor, a former Black Panther, and Baize, a welfare mother, can offer the Board some much needed new inspiration.

Our City News Editor, Ellen is highly knowledgeable and sensitive to University affairs and student rights.

Where the money will be spent and how it will be paid back have not been defined well enough in this proposal. We want guarantees the money will not be spent on new highways. We also do not want money taken from such programs as welfare to pay back principle and interest to rich people.

Washtenaw County Community College is a good program, since places like the Big U have limited their facilities to those who can afford the high prices. But property taxes in general ' are poor sources of raising revenue, also hurting most those who can least afford to pay them. WCC needs the money, however, and it is probably preferable that the millage to support it be continued, which means a yes vote.

NO FOR COUNTY MANAGER  (Proposal E)

We support a fully democratic system continued on page 16 SUN Endorsements continued from page 1 1 of government, where people are given direct control of all decisions in which they are directly affected. Appointed officials further cut off such direct participation.

NO ON MOTOR FUEL TAX USE (Proposal A)

The money you pay in taxes every time you fill your car at the gas pumps has traditionally been used to build more highways. But the energy crisis has once again focused attention on the the need for mass transit. This proposal if passed, will make it impossible to use a good part of those funds for public transit We need more trains and less highways.

YES ON VETERAN BONUS (Proposal B)

Poor and working people were conned into going to fight a war no one wanted. They came back and found no jobs and no stability. We oppose the war machine, but not those unlucky enough to have been forced to participate.

Both the Democrats and Human Rights PARTY supported this petition drive to stop taxing necessities a burden which falls heaviest on poor and middle income families. Michigan is one of the few states in this country which maintains such a regressive tax.