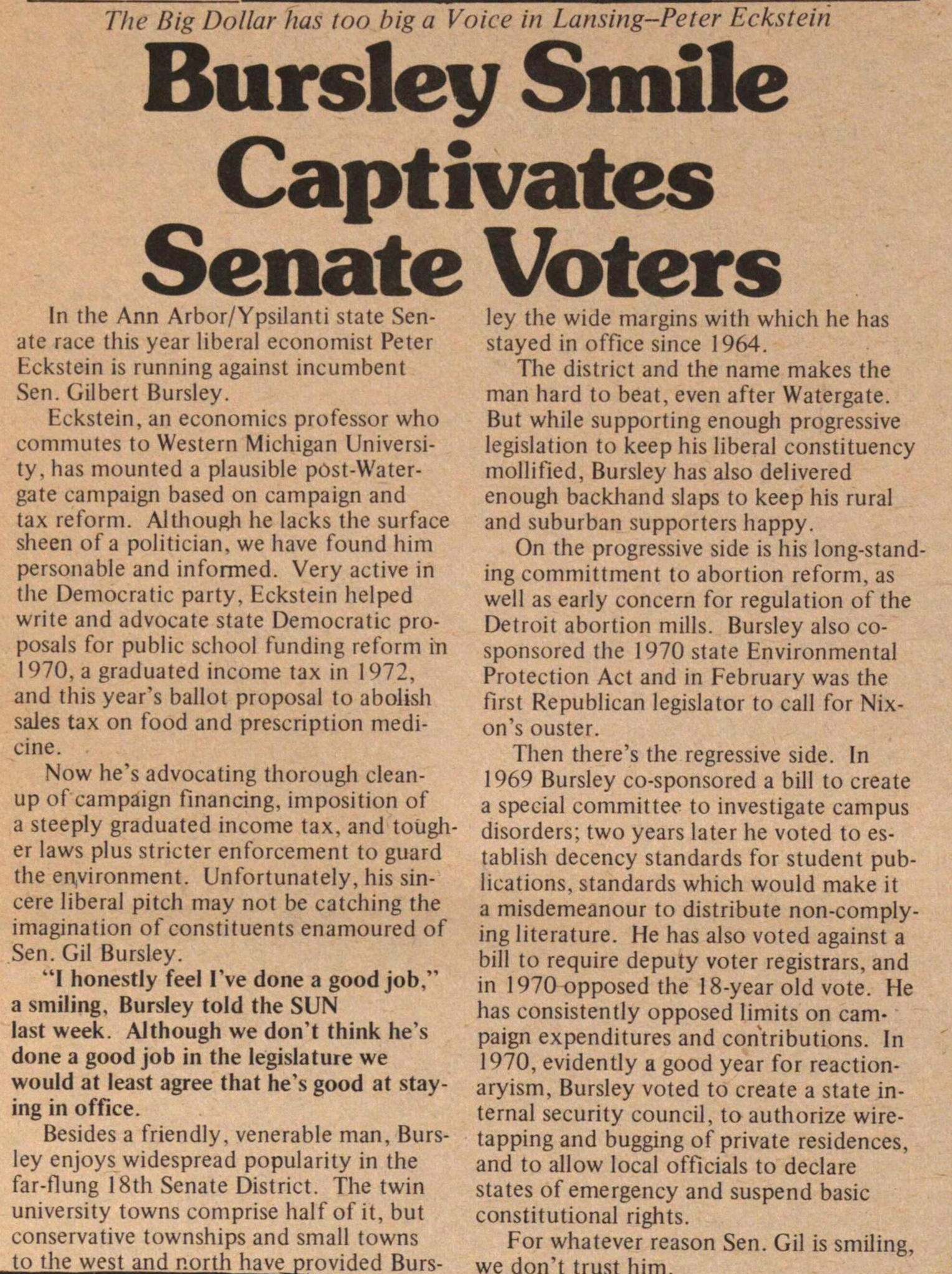 Eckstein, an economics professor who commutes to Western Michigan University, has mounted a plausible post-Watergate campaign based on campaign and tax reform. Although he lacks the surface sheen of a politician, we have found him personable and informed. Very active in the Democratic party, Eckstein helped write and advocate state Democratic proposals for public school funding reform in 1970, a graduated income tax in 1972, and this year's ballot proposal to abolish sales tax on food and prescription medicine.

Now he's advocating thorough cleanup of campaign financing, imposition of a steeply graduated income tax, and tougher laws plus stricter enforcement to guard the environment. Unfortunately, his sincere liberal pitch may not be catching the imagination of constituents enamoured of Sen. Gil Bursley.

"I honestly feel I've done a good job," a smiling, Bursley told the SUN last week. Although we don't think he's done a good job in the legislature we would at least agree that he's good at staying in office.

Besides a friendly. venerable man, Bursley enjoys widespread popularity in the far-flung 18th Senate District. The twin university towns comprise half of it, but conservative townships and small towns to the west and north have provided  the wide margins with which he has stayed in office since 1964.

The district and the name makes the man hard to beat, even after Watergate. But while supporting enough progressive legislation to keep his liberal constituency mollified, Bursley has also delivered enough backhand slaps to keep his rural and suburban supporters happy.

On the progressive side is his long-standing commitment to abortion reform, as well as early concern for regulation of the Detroit abortion mills. Bursley also cosponsored the 1970 state Environmental Protection Act and in February was the first Republican legislator to call for Nixon's ouster.   Then there's the regressive side. In 1969 Bursley co-sponsored a bill to create a special committee to investigate campus disorders; two years later he voted to establish decency standards for student publications, standards which would make it a misdemeanour to distribute non-complying literature. He has also voted against a bill to require deputy voter registrars, and in 1970 opposed the 18-year old vote. He has consistently opposed limits on campaign expenditures and contributions. In 1970, evidently a good year for reactionaryism, Bursley voted to create a state internal security council, to authorize wiretapping and bugging of private residences, and to allow local officials to declare states of emergency and suspend basic constitutional rights.

For whatever reason Sen. Gil is smiling, we don't trust him.