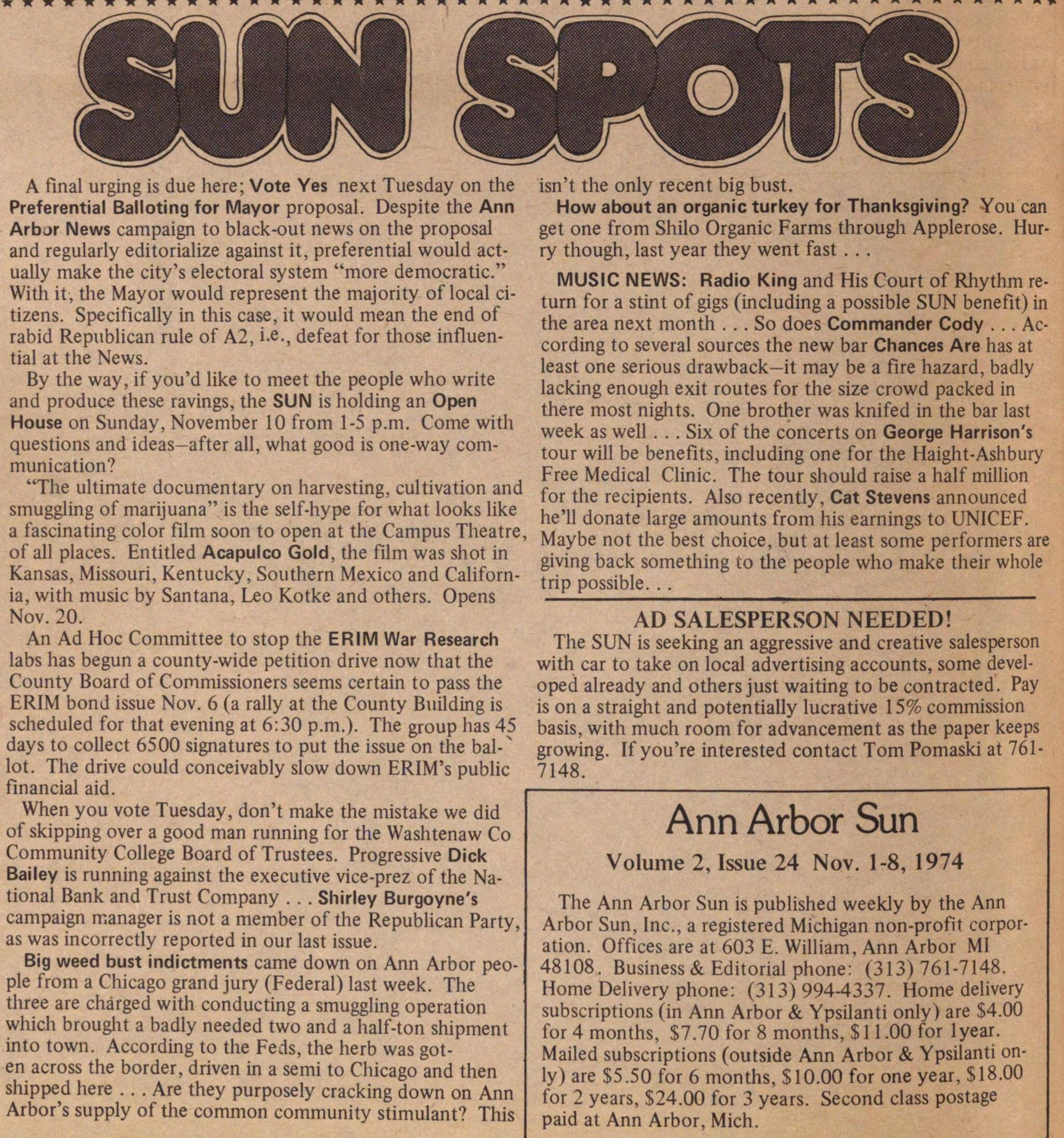 A final urging is due here; Vote Yes next Tuesday on the Preferential Balloting for Mayor proposal. Despite the Ann Arbor News campaign to black -out news on the proposal and regularly editorialize against it, preferential would actually make the city's electoral system "more democratie." With it, the Mayor would represent the majority of local citizens. Specifïcally in this case, it would mean the end of rabid Republican rule of A2, i.e., defeat for those influential at the News.
By the way, if you'd like to meet the people who write and produce these ravings, the SUN is holding an Open House on Sunday, November 10 from 1-5 p.m. Come with questions and ideas- after all, what good is one-way communication?
"The ultímate documentary on harvesting, cultivation and smuggling of marijuana" is the self-hype for what looks like a fascinating color film soon to open at the Campus Theatre, of all places. Entitled Acapulco Gold, the film was shot in Kansas, Missouri, Kentucky, Southern Mexico and California, with music by Santana, Leo Kotke and others. Opens Nov. 20.
An Ad Hoc Committee to stop the ERIM War Research labs has begun a county-wide petition drive now that the County Board of Commissioners seems certain to pass the ERIM bond issue Nov. 6 (a rally at the County Building is scheduled for that evening at 6:30 p.m.). The group has 45 days to collect 6500 signatures to put the issue on the ballot. The drive could conceivably slow down ERIM's public financial aid.
When you vote Tuesday, don't make the mistake we did of skipping over a good man running for the Washtenaw Co Community College Board of Trustees. Progressive Dick Bailey is running against the executive vice-prez of the National Bank and Trust Company . . . Shirley Burgoyne's campaign manager is not a member of the Republican Party, as was incorrectly reported in our last issue.
Big weed bust indictments came down on Ann Arbor people from a Chicago grand jury (Federal) last week. The three are charged with conducting a smuggling operation which brought a badly needed two and a half-ton shipment into town. According to the Feds, the herb was goten across the border, driven in a semi to Chicago and then shipped here ... Are they purposely cracking down on Ann Arbor's supply of the common community stimulant? This isn't the only recent big bust.
How about an organic turkey for Thanksgiving? You can get one from Shilo Organic Farms through Applerose. Hurry though, last year they went fast . . .
MUSIC NEWS: Radio King and His Court of Rhythm return for a stint of gigs (including a possible SUN benefit) in the area next month . . . So does Commander Cody . . . According to several sources the new bar Chances Are has at least one serious drawback-it may be a fïre hazard, badly lacking enough exit routes for the size crowd packed in there most nights. One brother was knifed in the bar last week as well . . . Six of the concerts on George Harrison's tour will be benefits, including one for the Haight-Ashbury Free Medical Clinic. The tour should raise a half million for the recipients. Also recently, Cat Stevens announced he'll donate large amounts from his earnings to UNICEF. Maybe not the best choice, but at least some performers are giving back something to the people who make their whole trip possible. . .