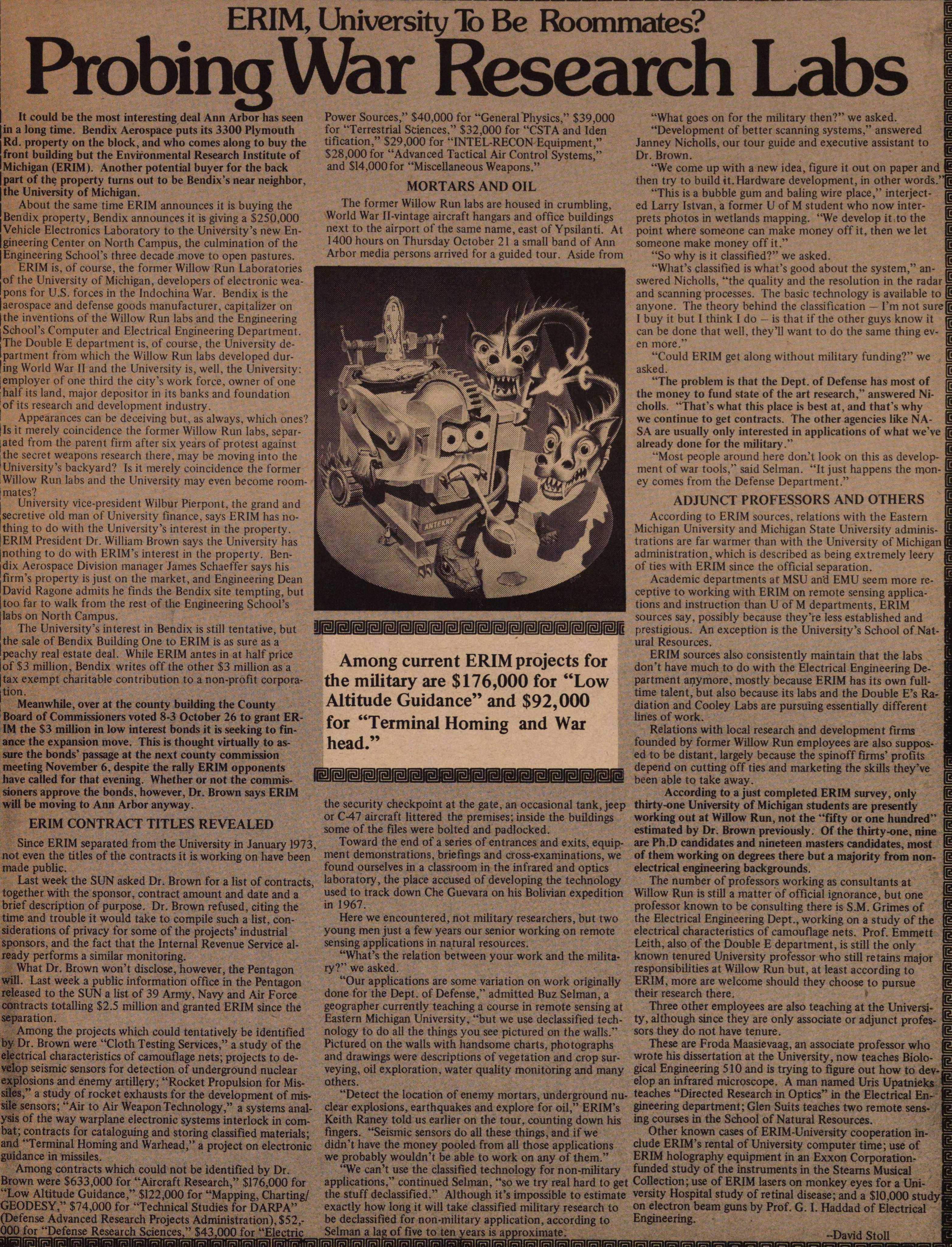 It could be the most interesting deal Ann Arbor has seen tin a long time. Bendix Aerospace puts its 3300 Plymouth Rd. property on the block, and who comes along to buy the front building but the Environmental Research Institute of Michigan (ERIM). Another potential buyer for the back part of the property turns out to be Bendix's near neighbor, the University of Michigan.

About the same time ERIM announces it is buying the Bendix property, Bendix announces it is giving a $250,000 Vehicle Electronics Laboratory to the University's new Engineering Center on North Campus, the culmination of the Engineering School's three decade move to open pastures.

ERIM is, of course, the former Willow Run Laboratories of the University of Michigan, developers of electronic weapons for U.S. forces in the Indochina War. Bendix is the aerospace and defense goods manufacturer, capitalizer on the inventions of the Willow Run labs and the Engineering School's Computer and Electrical Engineering Department. The Double E department is, of course, the University department from which the Willow Run labs developed during World War II and the University is, well, the University: employer of one third the city's work force, owner of one half its land, major depositor in its banks and foundation of its research and development industry.

University vice-president Wilbur Pierpont, the grand and secretive old man of University finance, says ERIM has noJthing to do with the University's interest in the property. IER1M President Dr. William Brown says the University has nothing to do with ERIM's interest in the property. Bendix Aerospace Division manager James Schaeffer says his firm's property is just on the market, and Engineering Dean David Ragone admits he finds the Bendix site tempting, but too far to walk from the rest of the Engineering School's labs on North Campus.

The University's interest in Bendix is still tentative, but the sale of Bendix Building One to ERIM is as sure as a peachy real estate deal. While ERIM antes in at half price of $3 million, Bendix writes off the other $3 million as a jtax exempt charitable contribution to anon-profit corporation.

Meanwhile, over at the county building the County Board of Commissioners voted 8-3 October 26 to grant ERIM the $3 million in low interest bonds it is seeking to finance the expansion move. This is thought virtually to assure the bonds' passage at the next county commission meeting November 6, despite the rally ERIM opponents have called for that evening. Whether or not the commissioners approve the bonds, however, Dr. Brown says ERIM wHI be moving to Ann Arbor anyway.

Since ERIM separated from the University in January 1973, not even the titles of the contracts it is working on have been made public.

Last week the SUN asked Dr. Brown for a list of contracts, together with the sponsor, contract amount and date and a brief description of purpose. Dr. Brown refused, citing the time and trouble it would take to compile such a list, considerations of privacy for some of the projects' industrial sponsors, and the fact that the Internal Revenue Service already performs a similar monitoring.

What Dr. Brown won't disclose, however, the Pentagon will. Last week a public information office ín the Pentagon released to the SUN a list of 39 Army, Navy and Air Force contracts totalling $2.5 million and granted ERIM since the separation.

Among the projects which could tentatively be identified by Dr. Brown were "Cloth Testing Services," a study of the electrical characteristics of camouflage nets; projects to develop seismic sensors for detection of underground nuclear explosions and enemy artillery; "Rocket Propulsion for Missiles," a study of rocket exhausts for the development of missile sensors; "Air to Air Weapon Technology," a systems analysis of the way warplane electronic systems interlock in combat; contracts for cataloguing and storing classified materials; and "Terminal Homing and Warhead," a project on electronic guidance in missiles.

The former Willow Run labs are housed in crumbling, World War Il-vintage aircraft hangars and office buildings next to the airport of the same name, east of Ypsilanti. At 1400 hours on Thursday October 21 a small band of Ann Arbor media persons arrived for a guided tour. Aside from the security checkpoint at the gate, an occasional tank, jeep or C-47 aircraft littered the premises; inside the buildings some of the files were bolted and padlocked.

Toward the end of a series of entrances and exits, equipment demonstrations, briefings and cross-examinations, we found ourselves in a classroom in the infrared and optics laboratory, the place accused of developing the technology used to track down Che Guevara on his Bolivian expedition in 1967.

"What's the relation between your work and the military?" we asked.

"Our applications are some variation on work originally done for the Dept. of Defense," admitted Buz Selman, a geographer currently teaching a course in remote sensing at Eastern Michigan University, "but we use declassified technology to do all the things you see pictured on the walls." Pictured on the walls with handsome charts, photographs and drawings were descriptions of vegetation and crop surveying, oil exploration, water quality monitoring and many others.

"Detect the location of enemy mortars, underground nuclear explosions, earthquakes and explore for oil," ERIM's Keith Raney told us earlier on the tour, counting down his fingers. "Seismic sensors do all these things, and if we didn't have the money pooled from all those applications we probably wouldn't be able to work on any of them."

"What goes on for the military then?" we asked.

"We come up with a new idea, figure it out on paper and then try to build it. Hardware development, in other words."

"This is a bubble gum and baling wire place," interjected Larry Istvan, a former U of M student who now interprets photos in wetlands mapping. "We develop it to the point where someone can make money off it, then we let someone make money off it."

"So why is it classified?" we asked.

"What's classified is what's good about the system," answered Nicholls, "the quality and the resolution in the radar and scanning processes. The basic technology is available to anyone. The theory behind the classification - I'm not sure I buy it but I think I do - is that if the other guys know it can be done that well, they'll want to do the same thing even more."

"Could ERLM get along without military funding?" we asked.

"The problem is that the Dept. of Defense has most of the money to fund state of the art research," answered Nicholls. "That's what this place is best at, and that's why we continue to get contracts. The other agencies like NASA are usually only interested in applications of what we've already done for the military."

"Most people around here don't look on this as development of war tools," said Selman. "It just happens the money comes from the Defense Department."

ADJUNCT PROFESSORS AND OTHERS

Academic departments at MSU and EMU seem more receptive to working with ERIM on remote sensing applications and instruction than U of M departments, ERIM sources say, possibly because they're less established and prestigious. An exception is the University's School of Natural Resources.

ERIM sources also consistently maintain that the labs don't have much to do with the Electrical Engineering Department anymore, mostly because ERIM has its own fulltime talent, but also because its labs and the Double E's Radiation and Cooley Labs are pursuing essentially different lines of work.

Relations with local research and development firms founded by former Willow Run employees are also supposed to be distant, largely because the spinoff firms' profits depend on cutting off ties and marketing the skills they've been able to take away.

According to a just completed ERIM survey, only thirty-one University of Michigan students are presently working out at Willow Run, not the "fifty or one hundred" estimated by Dr. Brown previously. Of the thirty-one, nine are Ph.D candidates and nineteen masters candidates, most of them working on degrees there but a majority from nonelectrical engineering backgrounds.

The number of professors working as consultants at Willow Run is still a matter of official ignorance, but one I professor known to be consulting there is S.M. Grimes of the Electrical Engineering Dept., working on a study of the electrical characteristics of camouflage nets. Prof. Emmett Leith, also of the Double E department, is still the only known tenured University professor who still retains major responsibilities at Willow Run but, at least according to ERIM, more are welcome should they choose to pursue their research there.

Three other employees are also teaching at the University, although since they are only associate or adjunct professors they do not have tenure.

These are Froda Maasievaag, an associate professor who wrote his dissertation at the University, now teaches Biological Engineering 510 and is trying to figure out how to develop an infrared microscope. A man named Uris Upatnieks taches "Directed Research in Optics" in the Electrical Engineering department; Glen Suits teaches two remote sensing courses in the School of Natural Resources.

Other known cases of ERIM-University cooperation include ERIM 's rental of University computer time; use of ERIM holography equipment in an Exxon Corporation-funded study of the instruments in the Stearns Musical Collection; use of ERIM lasers on monkey eyes for a University Hospital study of retinal disease; and a $10,000 studyg m electrón beam guns by Prof. G. I. Haddad of Electrical Engineering.  --David Stoll