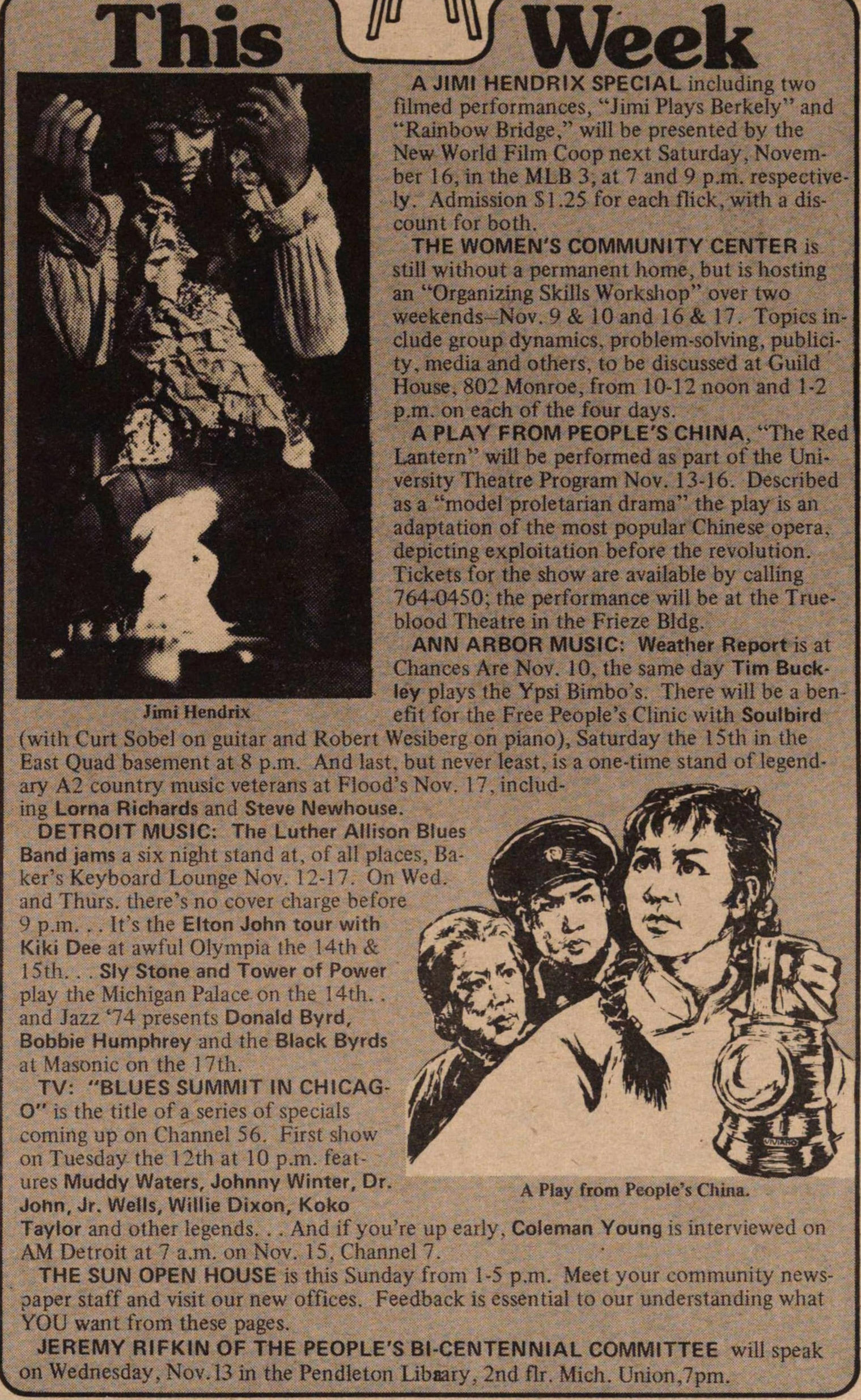 A JIM! HENDRIX SPECIAL including two filmed performances, "Jimi Plays Berkely" and "Rainbow Bridge," will be presented by the New World Film Coop next Saturday, November 1 6, in the MLB 3, at 7 and 9 p.m. respectively. Admission Si .25 for each flick, with a discount for both. THE WOMEN'S COMMUNITY CENTER is still without a permanent home, but is hosting an "Organizing Skills Workshop" over two weekends- Nov. 9 & 10 and 16 & 17. Topics include group dynamics, problem-solving, publicity, media and others, to be discussed at Guild House, 802 Monroe, from 10-12 noon and i -2 p.m. on each of the four days. A PLAY FROM PEOPLE'S CHINA, "The Red Lantern" will be performed as part of the University Theatre Program Nov. 13-16. Described as a "model proletarian drama" the play is an adaptation of the most popular Chinese opera, depicting exploitation before the revolution. Tickets for the show are available by calling 764-0450; the performance will be at the Trueblood Theatre in the Frieze Bldg. ANN ARBOR MUSIC: Weather Report is at Chances Are Nov. 10, the same day Tim Buckley plays the Ypsi Bimbo's. There will be a benefit for the Free People's Clinic with Soulbtrd (with Curt Sobe] on guitar and Robert Wesiberg on piano), Saturday the lSth in the East Quad basement at 8 p.m. And last, but never least, is a one-time stand of legendary A2 country music veterans at Flood's Nov. 17. -fc-j ing Lorna Richards and Steve Newhouse. DETROIT MUSIC: The Luther Allison Blues Band jams a six night stand at, of all places, Baker's Keyboard Lounee Nov. 12-17. On Wed. and Thurs. there's no cover charge befon 9 p.m. . . It's the Elton John tour with Kikt Dee at awful Olympia the 14th & 1 5th, . . Sly Stone and Tower of Power play the Michigan Palace on the 1 4th. . and Jazz '74 presents Donald Byrd, Bobbie Humphrey and the Black Byrds al Masonic on the I7th. TV: "BLUES SUMMIT IN CHICAGO" is the title of a series of specials coming up on Channel 56. First show on Tuesday the 1 2th at 10 p.m. features Muddy Waters, Johnny Winter, Dr. John, Jr. Wells, Willie Dixon, Koko Taylor and other legends. . . And if you're up early. Coleman Young is interviewed on AM Detroit at 7 a.m. on Nov. 15. Channel 7. THE SUN OPEN HOUSE is this Sunday from 1-5 p.m. Meet your community newspaper staff and visit our new offices. Feedback is essential to our understanding what YOU want from these pages. JEREMY RIFKIN OF THE PEOPLE'S BI-CENTENNIAL COMMITTEE will speak on Wednesday, Nov. 13 in the Pendleton Ubsary, 2nd fir. Mich. Union,7pm. j